The Pine Island Glacier is known to be the fastest-melting glacier in Antarctica, responsible for around a quarter of the continent’s ice loss. According to new research though, a warming planet isn’t the only reason the glacier is losing ice.

Based on an analysis of the water surrounding the West Antarctic Ice Sheet, which the Pine Island Glacier is part of, there’s a volcanic heat source somewhere underneath – and that knowledge is going to be crucial in predicting the future of this huge expanse of ice.

Before we get carried away, despite some headlines out there, this doesn’t mean climate change has been replaced as the main cause of the ice melt, according to the international team of researchers.

At this stage the role of the new heat source is unclear, but ice loss already triggered by rising temperatures could be exposing the glacier to more of the volcanic activity.

“Climate change is causing the bulk of glacial melt that we observe, and this newly discovered source of heat is having an as-yet undetermined effect, because we do not know how this heat is distributed beneath the ice sheet,” says one of the team, chemical oceanographer Brice Loose from the University of Rhode Island.

“Predicting the rate of sea level rise is going to be a key role for science over the next 100 years, and we are doing that. We are monitoring and modelling these glaciers.”

To put it another way, context is key – the surprising discovery doesn’t negate all the previous research linking climate change to glacier loss up until this point, but the volcanic heat source could help scientists better understand why the ice sheet is breaking up.

Last year a chunk of ice four times the size of Manhattan broke off the Pine Island Glacier.

The researchers weren’t looking for volcanic heat under the ice, but did notice high concentrations of helium-3 gas in the waters of the area – a tell-tale sign of volcanic activity. Further analysis showed a particular isotope of helium associated with an active heat source. 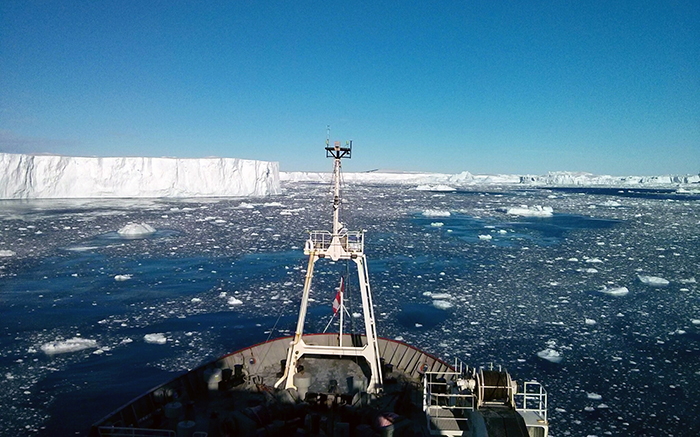 Testing the waters near the Pine Island Glacier. (Brice Loose)

“You can’t directly measure normal indicators of volcanism – heat and smoke – because the volcanic rift is below many kilometres of ice,” says Loose.

While the West Antarctic Ice Sheet was already known to be on top of a volcanic rift system, up until now there was no evidence of any magmatic (molten rock) activity for the past two thousand years. The helium isotopes give us that.

Finding an active heat source so close to the Pine Island Glacier means scientists might have to seriously rethink their calculations about how fast the sheet might melt and break up… and the kind of sea level rises we might see as a result.

If the whole of Pine Island Glacier were to melt, according to researchers we could potentially be looking at around 50 centimetres (1.7 feet) of global sea level rise.

Changes in the warmth of the winds and the ocean currents around Antarctica are thought to be driving the rapid ice melt, but now there’s a new factor to consider – and the next challenge is to work out what additional effect this active volcanic heat source is having.

As climate change weakens and melts the glacier, the pressure on the mantle will be lessened, say the researchers. That could lead to more heat escaping from the rocks below, perhaps accelerating ice loss even further.

“The discovery of volcanoes beneath the Antarctic ice sheet means that there is an additional source of heat to melt the ice, lubricate its passage toward the sea, and add to the melting from warm ocean waters,” says one of the researchers, Karen Heywood from the University of East Anglia in the UK.

“It will be important to include this in our efforts to estimate whether the Antarctic ice sheet might become unstable and further increase sea level rise.”

Astronomers Charted The Sun’s Life, And This Is How The Story Ends
Scientists Just Broke The World Record For The Most Powerful Stable Magnetic Field
The Moon Stole Something From Deep Inside Earth Eons Ago, and Scientists Can Prove It
Scientists Have Found A New Way to Detect Alien Worlds Beyond Our Solar System
Children in Japan Learn to Walk in a Subtly Different Way, Scientists Find