Scientists have discovered a ‘unique archive’ of ocean water that still exists virtually undisturbed from the last Ice Age some 20,000 years ago.

Palaeoceanography – which investigates the makeup of ancient oceans lost to history – invariably relies on proxy methods, since such bodies of water have inevitably long since disappeared.

But if you have the right boat and drill, it seems you can sometimes tap vanished oceans directly at the source – the next best thing to having a time machine.

That’s what a team led by geochemist Clara Blättler from the University of Chicago found while on board the research vessel JOIDES Resolution during an expedition in the Indian Ocean.

While studying marine sediments in the Maldives, the researchers discovered something they couldn’t have ever expected to find: direct evidence of what the ocean would have been like during the Last Glacial Maximum (LGM). 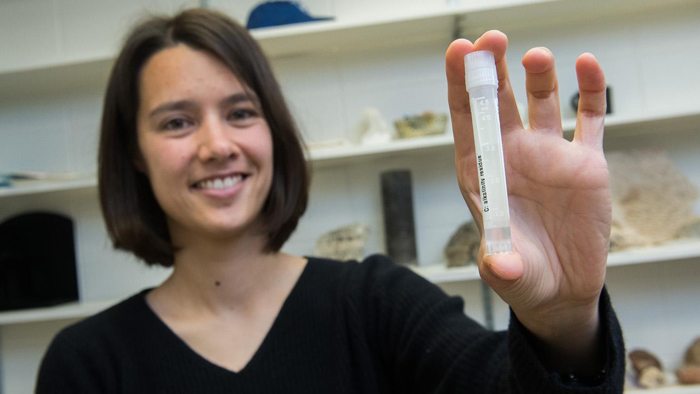 Blättler with a vial of the ancient seawater (Jean Lachat)

The LGM is when ice sheets last hit their peak, before beginning to thaw about 20,000 years ago. When that great melting happened, a veritable ocean of freshwater ice thawed and sloughed off into the frigid salty seawater.

The world’s surface hasn’t seen that ancient saltwater since then, until now.

By extracting kilometres of rock cores buried deep underneath the Indian Ocean, the researchers found concealed traces of the lost ocean, absorbed into porous rock formations millennia ago and preserved there ever since.

“Previously, all we had to go on to reconstruct seawater from the last Ice Age were indirect clues, like fossil corals and chemical signatures from sediments on the seafloor,” says Blättler.

“But from all indications, it looks pretty clear we now have an actual piece of this 20,000-year-old ocean.”

As part of the International Ocean Discovery Program (IODP) Expedition 359 in 2015, Blättler and her team discovered “a new direct archive of a glacial water mass … within the interstitial pore fluids of carbonate sediments”.

During the expedition, the researchers recovered over 3 kilometres (1.8 miles) of carbonate-rich sediment cores, and were able to extract pore fluids from the deep rock – revealing a range of distinct water masses with the specific properties of glacial seawater, and for the most part unaffected by diffusion or dispersion, the researchers write. 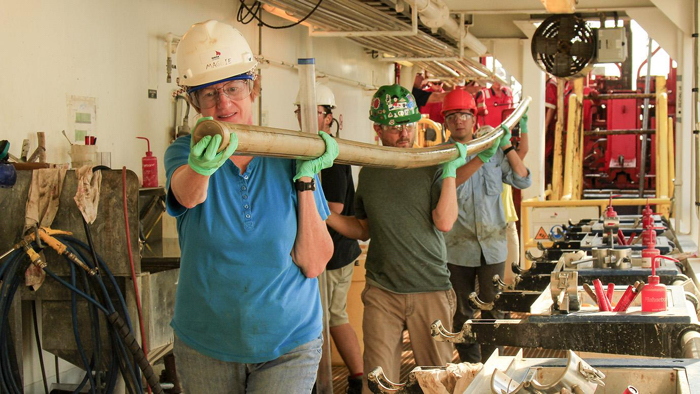 One of the drilled sections of rock core (Carlos Alvarez-Zarikian)

“In particular, the elevated chloride concentrations and water isotope ratios suggest that seawater from the Last Glacial Maximum is preserved in the subsurface, where it occupies over 400  metres [1,312 ft] of the sediment column within Mid- to Late Miocene sediments,” the authors explain.

“This system represents a unique archive yielding the most direct observations of glacial seawater to date, as well as a demonstration of the long-lasting potential for water-rock interaction in carbonate platform systems.”

What that means is the same techniques might potentially be able to help us one day make future palaeoceanographic discoveries about other oceans, or to analyse seawater from other periods of distant geologic history.

That’s if other sources of pore fluids have preserved the water sufficiently well, that is (and we can access them).

There are no guarantees of that, of course, but the fact we can even find the remnants of lost oceans like this is pretty outstanding.

The findings are reported in Geochimica et Cosmochimica Acta.