Archaeologists have had a closer look at the bones inside that mysterious black granite sarcophagus, and now have a better idea about who was inside. The three skeletons belonged to two men and a woman, who lived during the early Ptolemaic period.

Discovered in Alexandria in July, the sarcophagus – a stone receptacle for the interment of the dead – was the biggest ever found in the region, coming in at 30 tons (27 tonnes). The absence of inscriptions or markings fueled global speculation as to the inhabitant.

Sadly, when the sarcophagus was open, it was in disarray. Foul sewer liquid had leaked in, damaging the three mummies inside. And, again, nothing was discovered to identify those bones, although the absence of any cartouche identifiers seemed to rule out royalty.

Instead, the three bodies were thought to be those of military officers. The new identification throws a spanner in that explanation, since the ancient Egyptian military did not typically include women (with the rare exception of a royal military leader).

So who were they? That’s still unclear, but their bones tell a little more about them, the Egyptian Ministry of Antiquities revealed in an announcement.

This last skeleton – the older male – had something interesting. A small hole, under an inch in diameter, that had clearly healed, indicating that the man had lived for a long time with it.

This was probably the result of a practice called trepanation – the deliberate drilling of a hole in the skull to treat a wide range of ailments, including headaches, fractures, epilepsy and hypertension. 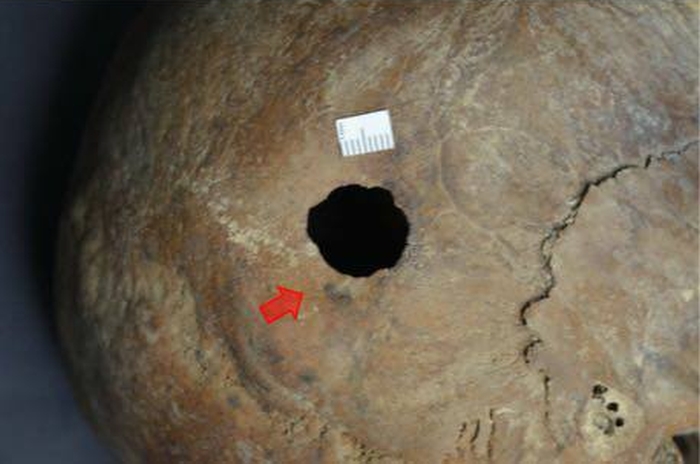 “This surgery is the oldest surgical intervention ever known since pre-history but was rare in Egypt,” explained Zeinab Hashish, Director of the Department of Skeleton Remains Studies at the Ministry of Antiquities.

Only a few skulls from ancient Egypt have ever been found with trepanation holes.

The archaeologists also believe that the bodies were interred at separate times, since the skeletons were found stacked on top of each other.

There wasn’t much in the way of grave goods, but three gold panels survived, delicately inscribed with images. Archaeologists will be examining these to see if their meaning can be deciphered.

As for the red liquid found in the sarcophagus, it’s probably sewer water mixed with the decomposed and disintegrated mummy wrappings, the researchers said. Anyone still feel like taking a sip?

Further analysis of the bones will be conducted, including CT scans, and DNA tests to determine if the bodies were members of the same family.