Human poop can reveal more than you might think, even when it’s really, really old.

In a new study of a Central American Maya civilization, samples of ancient feces have shown how the size of this community varied significantly in response to contemporary climate change.

Researchers identified four distinct periods of population size shift as a reaction to particularly dry or particularly wet periods, which haven’t all been documented before: 1350-950 BCE, 400-210 BCE, 90-280 CE, and 730-900 CE.

In addition, the flattened poop piles show that the city of Itzan – which in the modern day would be in Guatemala – was inhabited some 650 years earlier than the archaeological evidence had previously suggested. That’s a lot of information to get from human dung. 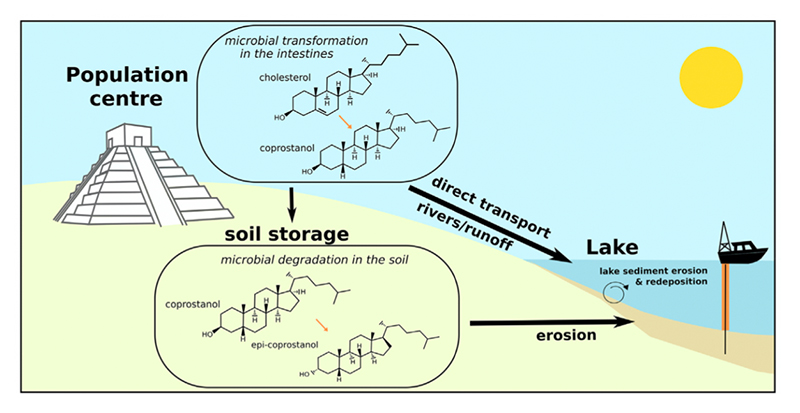 “This research should help archaeologists by providing a new tool to look at changes that might not be seen in the archaeological evidence, because the evidence may never have existed or may have since been lost or destroyed,” says biogeochemist Benjamin Keenan, from McGill University in Canada.

“The Maya lowlands are not very good for preserving buildings and other records of human life because of the tropical forest environment.”

This study uses a relatively new method of analysis based on fecal stanols – organic molecules in human (and animal) poop that get preserved in sediment layers under lakes and rivers, sometimes for thousands of years.

The concentrations of these stanols over time, as marked by sediment layers, can give researchers clues about population change that can be backed up with other historical records. So far, stanols have been shown to be accurate indicators of how many people were living in a certain place at a certain time.

Here the stanols were extracted from a lake close to the site of Itzan, and measured against what experts already know about the area over the last few thousand years, based on discoveries from traditional archaeological excavations.

Those findings were then matched up with historical climate data, including evidence for precipitation (or lack of it) and pollen levels (indicating vegetation cover) left behind in the geological record. The researchers found some correlations but also some new population shifts in the ancient layers of poop remains.

“It is important for society generally to know that there were civilizations before us that were affected by and adapted to climate change,” says biogeochemist Peter Douglas, from McGill University.

“By linking evidence for climate and population change we can begin to see a clear link between precipitation and the ability of these ancient cities to sustain their population.”

The team was also able to use the fecal record to identify a population spike around the time of the 1697 CE attack by Spain on the last Maya stronghold in a neighboring area – presumably a movement of war refugees, and one which historians haven’t documented up until this point.

There are also points when times of known high population in Itzan don’t match up with the volume of recovered fecal stanols. The researchers think this might be because human poop was used by this Maya community as a crop fertilizer – a way of counteracting soil degradation and nutrient loss in their agricultural lands.

And all this can be assessed from remnants of feces left thousands of years ago – showing that this method of analysis can be a useful part of the scientist toolkit when it comes to tracking population change right back to ancient times.

“Fecal stanols have a strong potential to serve as proxies for changes in human and animal populations in Mesoamerican landscapes, while also providing insights into land-use change,” conclude the researchers in their published paper.

The research has been published in Quaternary Science Reviews.