Of all the animals, humans have evolved pretty spectacular hands. Our particular manual configuration is unique in the animal kingdom, which means we were probably doing something differently from our primate cousins.

Now anthropologists think they have figured out a previously overlooked activity: cracking open bones to get to the rich, fatty, calorie-dense marrow inside.

Compared to primate hands, humans have a longer, more muscular thumb; shorter fingers and a more flexible wrist; larger joint surfaces; and features related to more stable palms. Our grip strength may be lower, but our dexterity is through the roof compared to apes and chimps.

It’s long been thought that using tools, weapons and throwing objects contributed to the evolution of the human hand.

Among the tool-related activity, cracking nuts, cutting meat and cracking bones for marrow were all practised by early humans. But a team researchers from the University of Kent in the UK and Chatham University in the US set out to figure out the specific contribution of these activities.

“These behaviours all involve different materials, different end goals, and different patterns of force and motion for the upper limb,” they wrote in their paper.

“Therefore, it is unlikely that each behaviour exerted equal influence on the evolution of the modern human hand.

“Instead, a behaviour’s likelihood of exerting a selective pressure on the hand is a function of the magnitude of stresses and hand/tool relationship associated with that behaviour, the benefit received from it, and the amount of time spent performing it.” 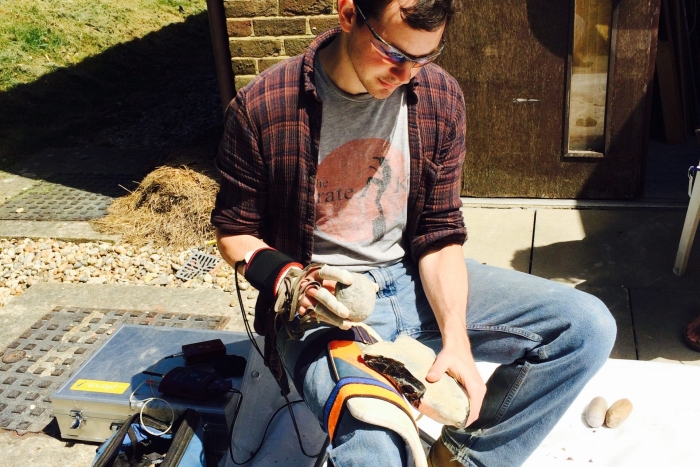 To work out how these various activities placed stresses on the joints of the hand, the researchers used a manual pressure sensor system called Pliance. Fitting over the fingers like a glove, the sensors determined the amount of pressure on each of the wearer’s phalanges.

Then, 39 people were recorded performing various Plio-Pleistocene tasks, including cracking nuts, hitting bones with stone hammers to get the marrow out, hammering flint with a stone to produce flakes, and using a handaxe and stone flakes – slivers of flint used as arrowheads and knives.

The pressures varied across all the activities, but those that required the most pressure were hammering bones for marrow, and hammering flint for flakes.

The one that required the least pressure was cracking open nuts with a stone. Other primates perform this activity, too, so that perhaps explains why cracking nuts didn’t cause a similar level of hand dexterity evolution in chimps.

That doesn’t mean bone marrow and flaking flint were solely responsible for the human hand. It’s likely there were many different ways early hominins used their hands that played a role in the evolution of hands as we know them today.

But, all things considered, the hammering activities would have been pretty important. As the researchers point out, it’s not enough to just consider the pressure different types of tool use would exert on those ancestral hands – the magnitude of that pressure was important, too.

“When magnitude is taken into account, analyses of the digits as a group, of individual digits and of phalanges point to hammerstone use during marrow acquisition and flake production as the best candidates [..] that may have exerted primary selective pressures on the evolution of the human digits,” the team writes.

The early human ancestors must have really loved that bone goo.

The research has been published in the Journal of Human Evolution.

These Dwarf Galaxies Seem to Be Devoid of Dark Matter, And It Doesn’t Make Sense
This shaggy deep-sea creature looks like an undulating wad of orange spaghetti
The James Webb Space Telescope has its first image of the most distant known star
Unexpected Solar Wind Stream Hits Earth at 372 Miles Per Second
Birds possess an amazingly dinosaur-like feature before they hatch from their eggs