It’s easy to think the world is ending when natural disasters are pummelling vulnerable islands and politicians are threatening nuclear destruction.

But take a step back and you’ll find a more encouraging picture of where the human race is headed – at least from a public health and quality of life perspective.

Across the board, in matters of mortality, hunger, disease, and more, life is getting better for billions of people.

Here is a sampling of that global progress.

Extreme poverty is defined as living on less than US$1.90 a day.

For about 150 years (between 1820 and 1970) the number of people dealing with it continued to rise. By the end of the 1970s, more than 2 billion people were classified as extremely poor.

People still seem to think the world is getting poorer, but the data show the number of people in extreme poverty has shrunk to 705 million from that 2 billion high, Melinda Gates explained in a recent Gates Letter.

‘The larger historical trends are toward greater inclusion and caring,’ she said.

‘We definitely see it in global health. Governments are prioritising it. Citizens are supporting it. And scientists are migrating to it.’

The polio vaccine has nearly wiped out the disease worldwide. 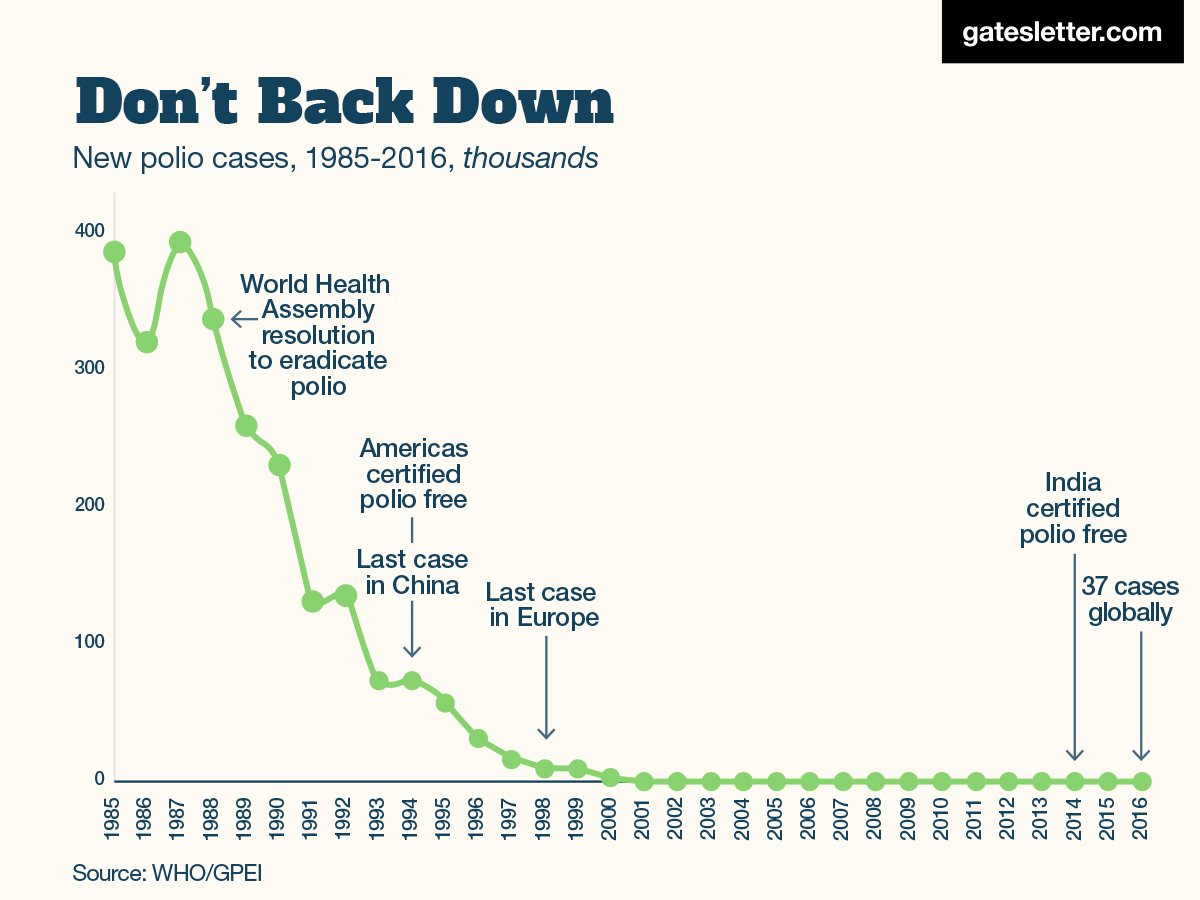 New polio cases haven’t gone down much in the last 17 years — mostly because they’re already so close to zero.

In the 64 years since Jonas Salk developed the first polio vaccine, many countries have made concerted efforts to get people vaccinated. China saw its last cases in the mid-1990s and India about 20 years later.

In 2016, there were fewer than 40 new cases logged worldwide. Currently, just four countries have yet to eradicate polio.

Contraceptive use is higher than it’s ever been.

One of the most effective methods for ensuring economic and social success in a nation is female empowerment. In its 2015 Gates Letter, the Bill and Melinda Gates Foundation noted that investments in women’s health result in stronger workforces and economies in general.

Contraceptives help break the cycle of high fertility and child mortality, letting women focus more on themselves and their families. Roughly 300 million women in the 69 poorest countries used some form of birth control in 2016 – a jump of 30 million from 2012. 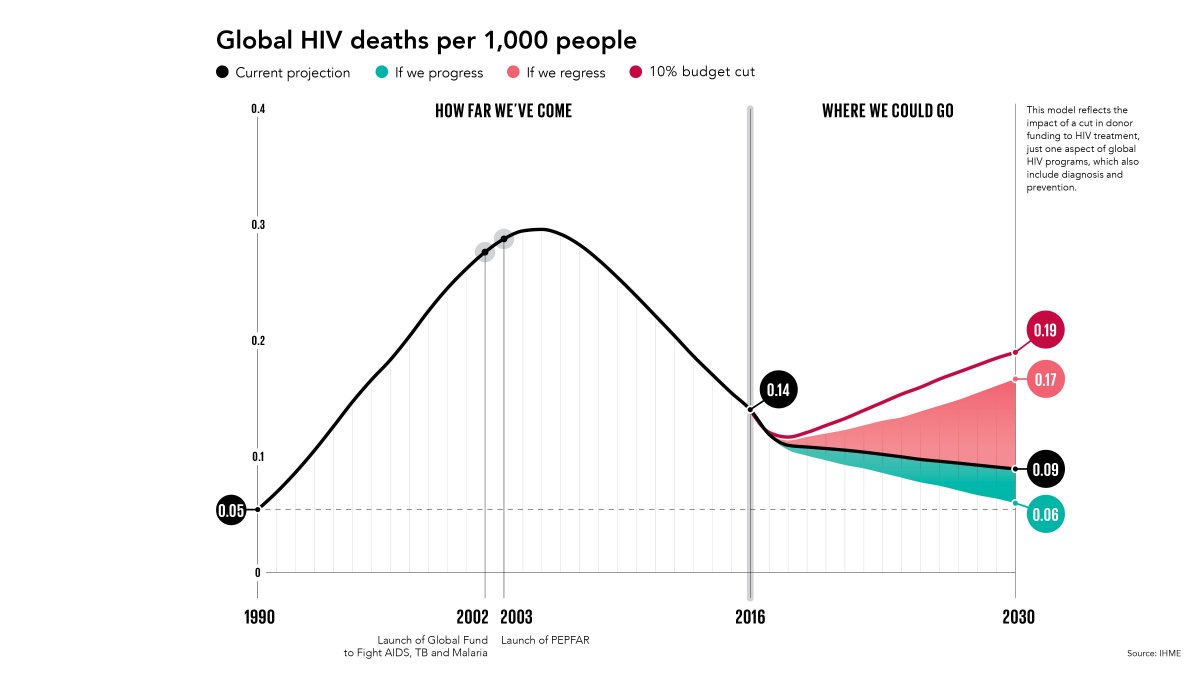 The world has made enormous leaps in the fight against HIV/AIDS, to the extent that with the right treatment, someone HIV-positive can expect to live as long as their healthy neighbour.

As of 2015, there were 36.7 million people worldwide living with the virus, roughly 1.8 million of whom were children under 15 years old.

Fewer kids are dying before their 5th birthday. 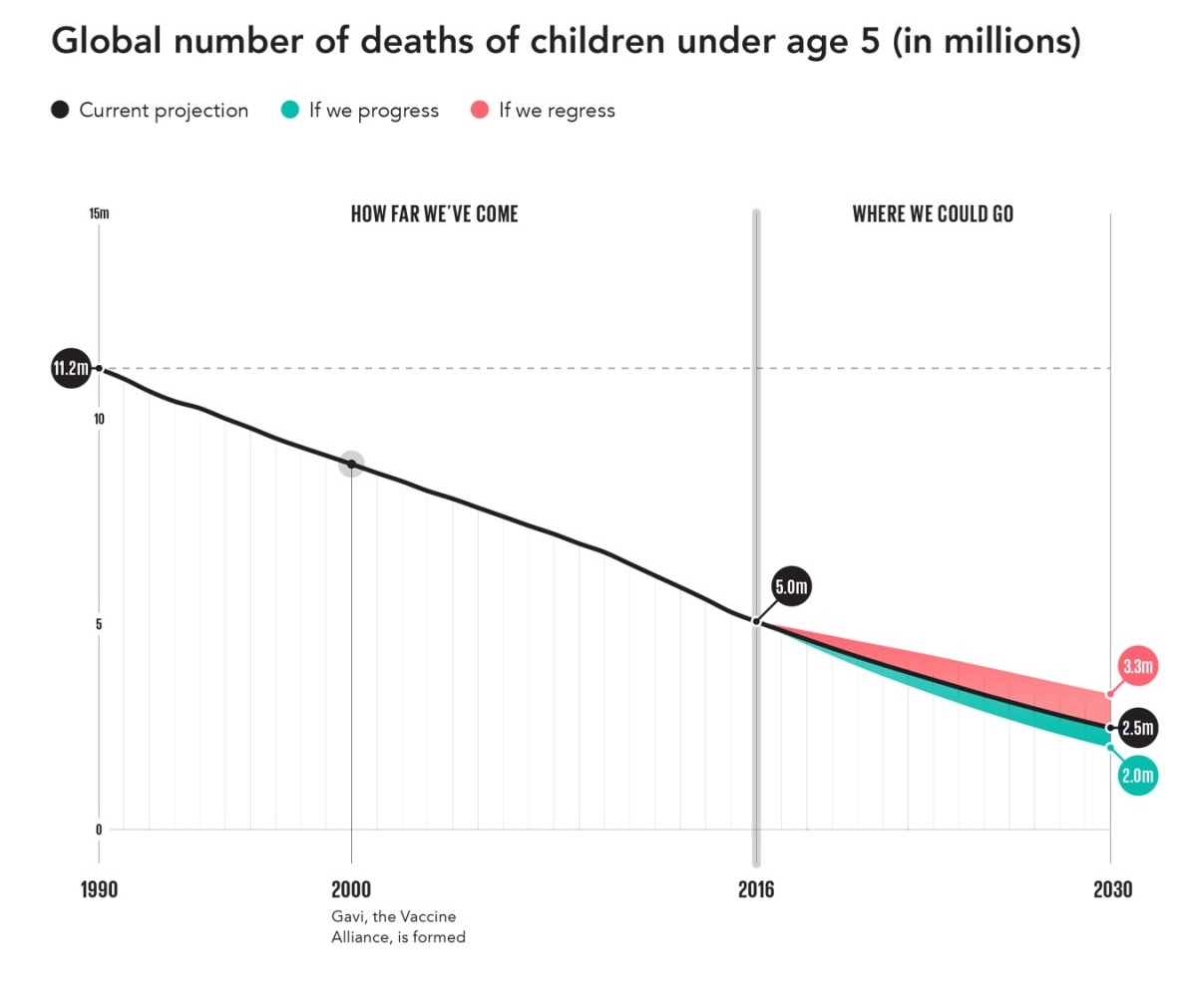 This is largely due to advances and investments in simple, inexpensive measures in developing countries, including bed nets to prevent malaria and drilling wells for access to clean water.

The World Health Organisation finds preterm birth complications and malnutrition play deciding roles in how children fare in their first years of life.

Sanitation is steadily getting better. 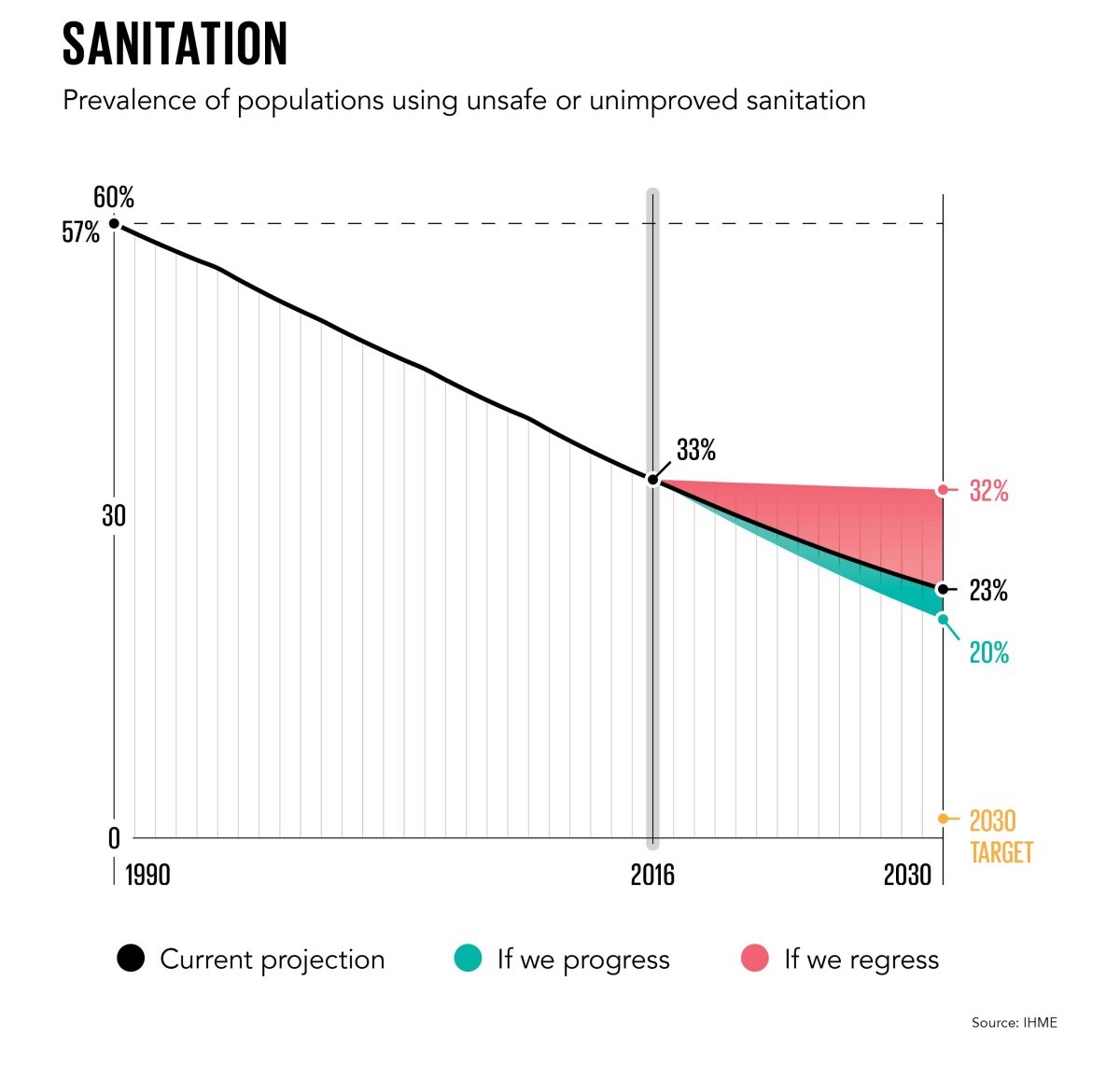 Greater numbers of sewer connections and water treatment plants are helping to clean up the world.

Over the last 25 years, the percentage of people relying on unsafe sanitation has fallen from 57 percent to 33 percent.

The Gates Foundation has contributed to the trend, in part by funding research to build waterless toilets and investing in purifying waste water to make it drinkable.

Billions of people are gaining access to fresh produce. 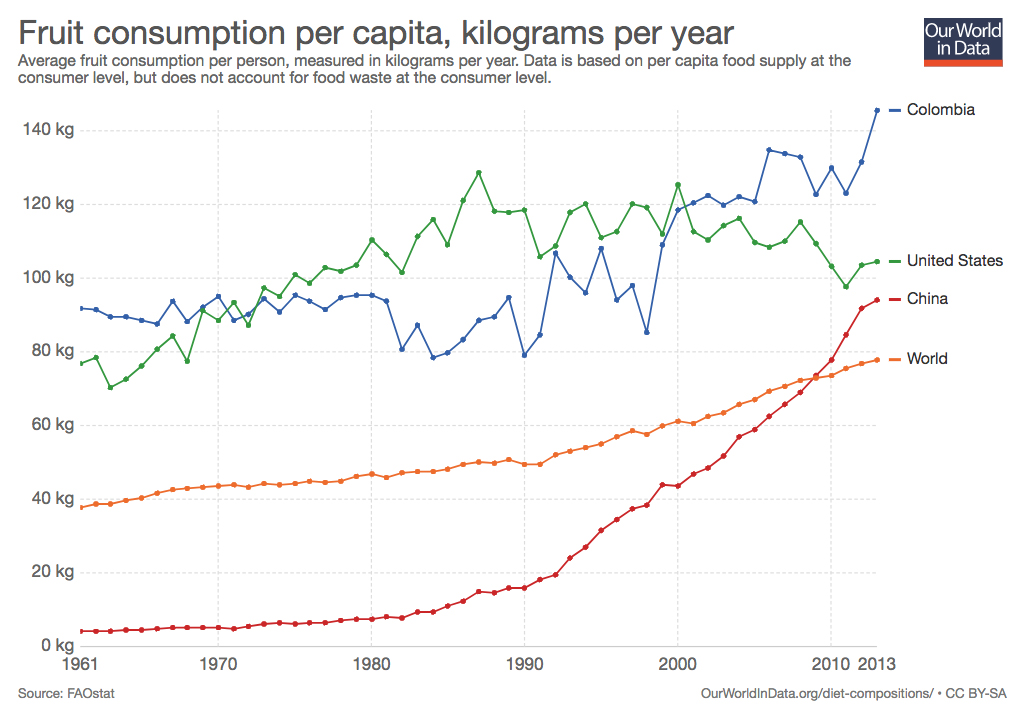 Given the difficulties related to shipping and storing fresh produce, gains in worldwide consumption can act as a proxy for access to healthy sources of food.

That total is still below countries like China, the US, and Colombia, which means there are a host of countries without regular access. But advances in refrigeration and global aid have enabled healthier eating across the globe.

In both developed and developing countries, labour laws mandating a minimum age for work have enabled the child labour rate to plummet for more than a century.

The same story has played out in the US, where child labour has all but been eradicated, save for trace illicit cases. As recently as 1890, however, roughly one in 10 kids worked.

Due to higher rates in developing nations, the global average hovers around 17 percent. 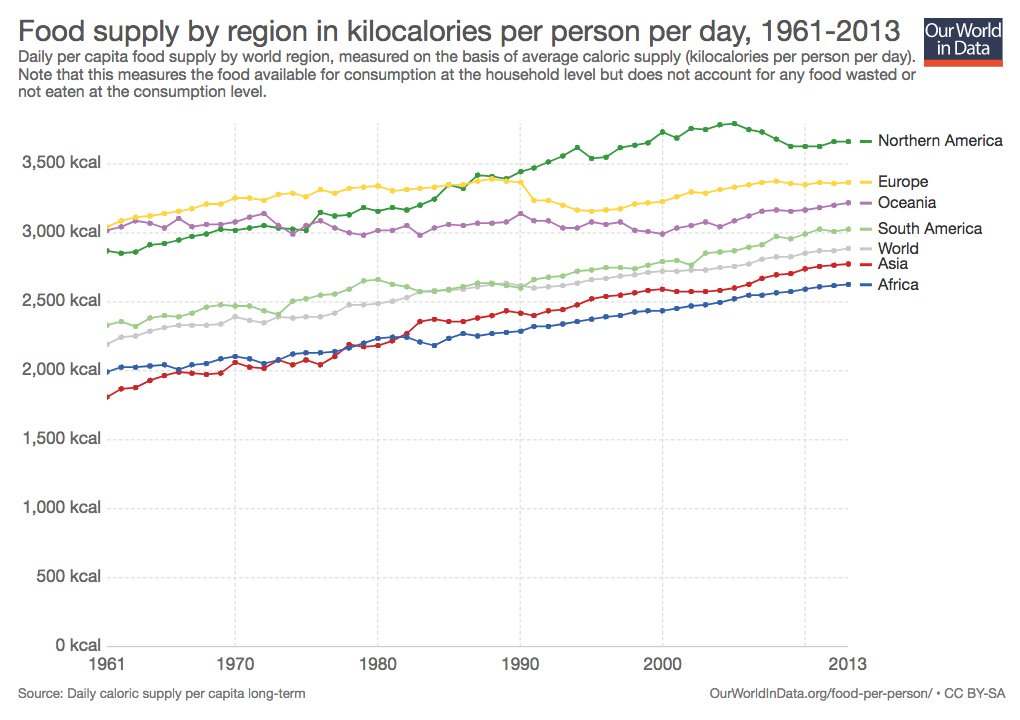 One of the great achievements in public health over the last century has been the ability to give food to people who need it.

Across the world, on every continent, people are eating more (and more equitably) compared to generations past, according to data analysed by Max Roser at Our World in Data.