An ancient Egyptian text more than 1,300 years old, which would originally have been used as a magic spell, has finally been deciphered – and it seems like love was the goal. Today of course, many of us might just use a dating app instead.

The spell or “magic recipe” includes an image showing two bird-like creatures facing each other, surrounded by fragments of sentences referring to Biblical characters and events. The text is written in Coptic, an Egyptian language that used the Greek alphabet.

A new analysis, carried out by Korshi Dosoo from the University of Strasbourg in France, draws comparisons with other similar papyrus artefacts and known rituals of the time to suggest that this was a recipe for love, and possibly protection, between two people.

“This image shows affinities with a number of similar tableaux from other texts of the same genre, and analysis of these images, alongside textual evidence, suggests that they may be understood as a representation of a ritual intended to unite two lovers,” writes Dosoo in his published paper. 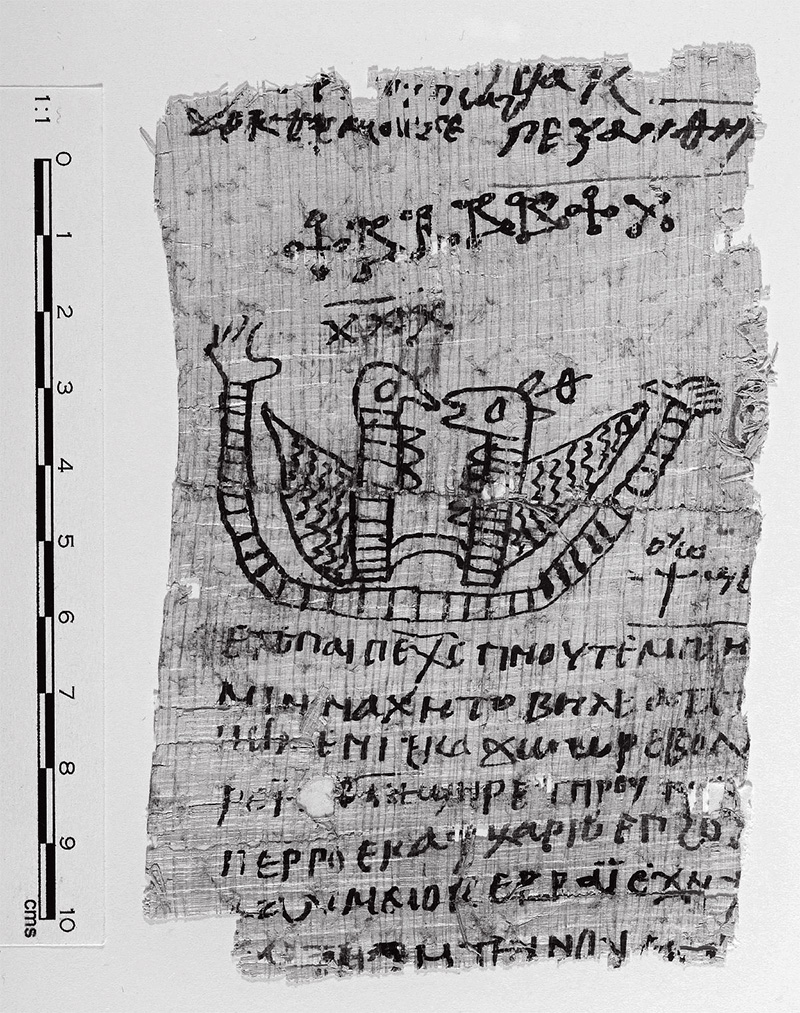 One of around 900 papyri and papyrus fragments stored at Macquarie University in Sydney, Australia, this fragment is technically known as P.Macq.Inv.588.

The slight differences between the two facing figures in the image on the papyrus might be an attempt to show male and female characters, Dosoo says. The connection drawn between them could be a penis, according to the researcher, or maybe it’s not that overtly sexual – maybe it’s bonds or chains.

But the fact these creatures are facing each other suggests love is the aim of the spell. In other magical recipes of the time intended to cause separation, the depicted figures would typically be facing apart.

“From an observer point of view, we could say that the image might have enhanced the performative aspect of the spell – the client might find the weird drawings an impressive addition to the overall atmosphere and impression created by the ritual,” Dosoo told Owen Jarus at Live Science.

A mention of the Biblical character Ahitophel – who deserted King David – hints that the incantation is designed to avoid such bad influences (Christianity was widely practised in Egypt at the time). There’s also mention of an exotic deer musk perfume, often used to attract lovers together.

Short texts like this one would probably have been part of a larger volume, a kind of magician’s handbook. As well as bringing love and blessing on couples, or causing them to split up, they would also have been used to try to see the future or to heal diseases.

Dosoo says that while it’s tricky to be certain about the age of the papyrus, it does match the style and content of other texts accurately dated to the late seventh or early eighth century.

The researcher also admits that trying to make sense of these magical recipes is far from easy: while he thinks his interpretation is “broadly correct”, there are other possibilities. The two figures could be demons, for example, looking to manipulate someone.

Experts have been busy trying to decipher the magic spells in the Macquarie University collection for years. This text may be part of the Handbook of Ritual Power that was the subject of a similar study back in 2014.

But before you start using this on the object of your own affections, note that the recipe might not have been used to prompt two people to fall in love – but rather to give fate a nudge and clear the way for an existing love to happen.

“Christian literary texts from Egypt which mention love spells often imply that the problem is not that the woman doesn’t love the man per se, but that he does not have access to her, because she is a young unmarried girl protected and secluded by her family, or already married to someone else,” Dosoo told Live Science.

The research has been published in the Journal of Coptic Studies.

The Star Betelgeuse Went a Little Dim in 2019. Astronomers Think They Know Why
Hubble’s Closeup of The Orion Nebula Looks Like a Surreal Dreamscape
Robot Shows It’s Possible to Swim Through The Emptiness of a Curved Universe
Helping Your Kid With Homework Probably Isn’t Benefiting Them Like You Think It Is
A Nuclear War Could Starve Billions, But One Country May Be Safer Than The Rest