To be a scorpion mama is to have a heavy weight on your shoulders… the weight of up to 100 of your kiddos getting a free ride.

But after looking deeper, we soon discovered that when scorpions decide to mate, it’s not just the back full of babies you have to worry about. The entire process is fascinating, if equally horrifying.

First, the male and female scorpion grab each other with their pincers, and ‘dance’ – a process which allows the female to test the strength of the male, and the male to lead his partner around to find a suitable spot to leave his sperm packet for her to take.

After a couple of minutes when all of this is done, the dance ends, and they head their separate ways… unless the female decides to eat the male (which actually happens less than we’ve been led to believe).

Another fun fact: Apparently some species of scorpions don’t always need to bother with mating to produce babies. If things are looking a bit dire, they can instead undergo parthenogenesis – an asexual form of reproduction where the egg becomes an embryo without any sperm required.

Depending on the species, scorpion mothers have to endure up to 18 months of pregnancy before their little ones are born. Scorpions require relatively long pregnancies because unlike most arachnids, scorpions birth their young live, instead of in eggs.

This is where the babies come in. When they’re born, their exoskeletons are still very soft, so they’d make an easy meal for predators. To avoid this fate, the newly born scorplings will climb up their mum’s legs and pincers to the safety of her back, staying there for up to a few weeks until their first moult and their exoskeletons harden. 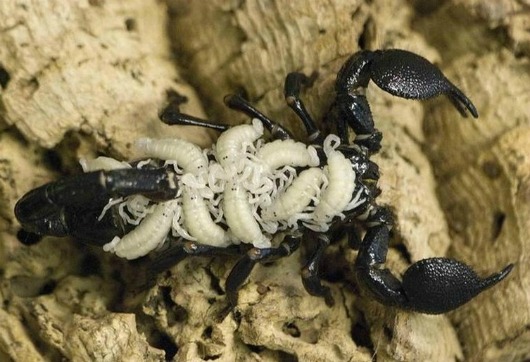 Occasionally the mother can get snacky here too, and will sometimes eat a baby or two if she can’t find enough food.

Then the cycle begins again, as the babies’ shells harden and then wander off into the world.

They just grow up so fast….

Breathtaking pic from Hawaii shows not one, but two rare sky phenomena
9+ wonderful images to remind us just how far technology has come
We need urgent research to know what microplastics are doing to us. Here’s why
A major ocean current could be on the verge of a devastating ‘tipping point’
Physicists just reached a new speed limit for moving quantum information