With an estimated 300 active volcanoes on Earth, the challenge is how to monitor them all to send out early warnings before they erupt. Measuring volcanic gas emissions is also no easy task.

The drones could help local communities monitor nearby volcanoes and forecast future eruptions. Their measurements could also tell us more about the most inaccessible, highly active volcanoes on the planet and how volcanoes contribute to the global carbon cycle.

The Manam volcano is located on an island just 10 kilometres (6 miles) wide that sits off the northeast coast of PNG. The island is home to over 9,000 people and Manam Motu, as it’s known locally, is one of the most active volcanoes in the country. In 2004, a major eruption from Manam forced the entire island to evacuate to the mainland and devastated people’s crops and homes.

Scientists have a few ways of forecasting when a volcano is going to blow. They can monitor earthquake activity in the area to detect tremors which almost always precede eruptions, and look out for bulging in the volcano’s sloping walls as magma builds up underneath.

When clear skies allow, satellites can also rapidly detect and measure volcanic emissions of gases such as sulphur dioxide (SO2). Changes to these gas emissions can signal more activity in the volcano below.

“Manam hasn’t been studied in detail but we could see from satellite data that it was producing strong emissions,” said volcanologist Emma Liu from University College London, who led the research team of earth scientists and aerospace engineers.

“We [also] wanted to quantify the carbon emission[s] from this very large carbon dioxide emitter,” added geochemist Tobias Fischer, from the University of New Mexico.

Although volcanoes emit just a fraction of the carbon emissions humans do, researchers still want to be able to estimate what carbon dioxide (CO2) they do emit, to factor this into the carbon budget we have left to limit the effects of climate change.

Travelling to PNG, the international team set about testing two types of long-range drones equipped with gas sensors, cameras, and other devices during two field campaigns on Manam Island, in October 2018 and May 2019. 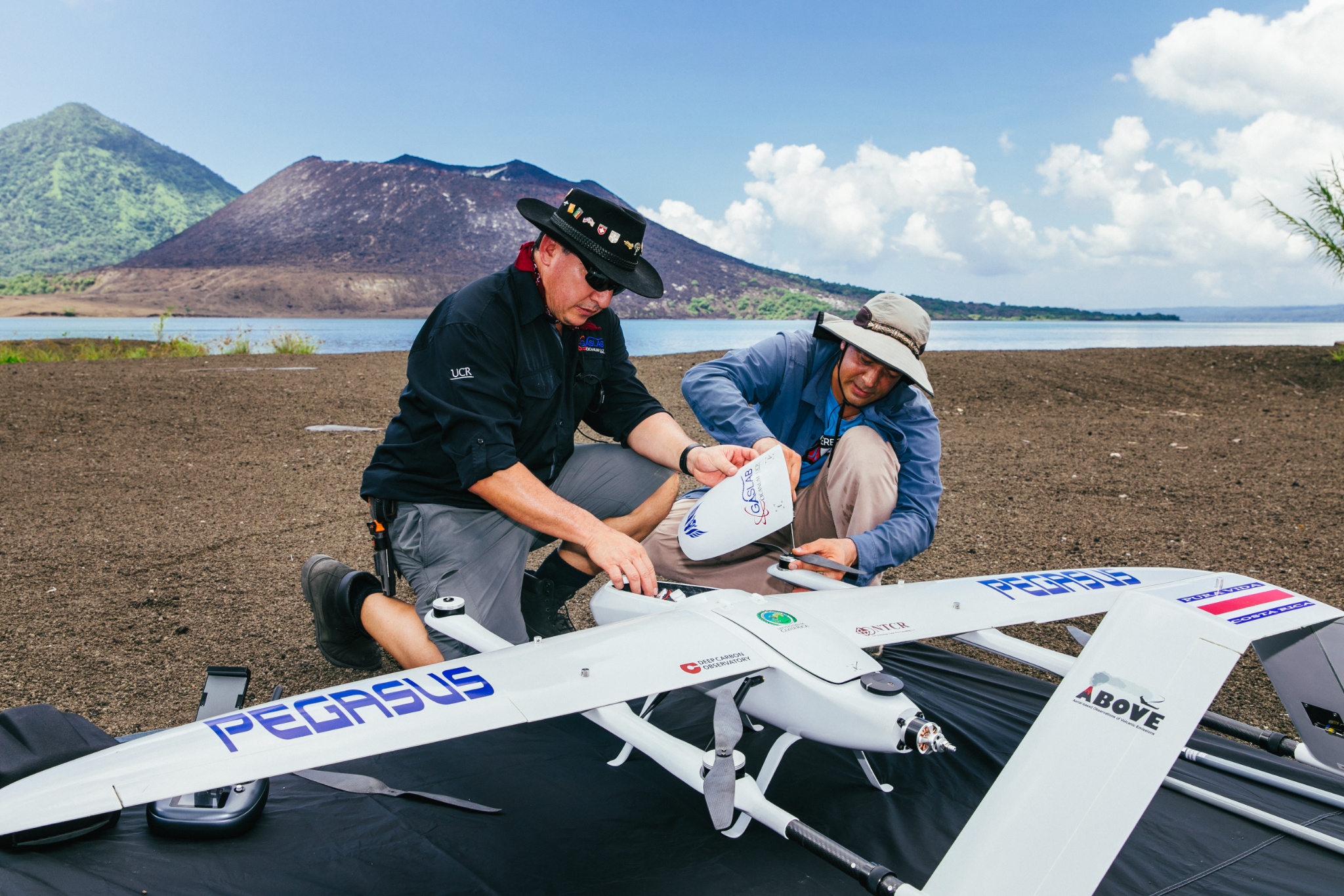 Preparing one of the drones for a test flight. (Matthew Wordell/ABOVE)

The drones flew over 2,000 metres (6,561 feet) high into Manam’s highly turbulent volcanic plumes and some 6 kilometres (3.7 miles) away from their launching pad, well out of sight of their pilots.

On each flight, the drones took images of Manam and its two craters, measured the gas composition right above the rising plumes and collected four bags full of extra gas for rapid analysis when the aircraft touched down.

Aerial images from the drone fly-overs showed that degassing at Manam’s southern crater intensified between October 2018 and May 2019. In fact, the volcano soon erupted in June, just one month after the researchers’ second field trip.

But rising volcanic emissions are not alone a reliable indicator of whether an eruption is imminent or likely, so the researchers also looked at the ratio between different gases, namely CO2 and SO2, in Manam’s plumes.

This can help detect the ascent of hot magma to the surface and expulsion of CO2-rich emissions that reportedly precede big eruptions.

However, the researchers found that the mixture of gases emitted from Manam was much the same during both field trips.

Integrating their drone measurements with satellite data, the researchers were able to show that Manam ranks among the top 10 strongest degassing volcanoes in the world, emitting an estimated 3,700 tons of CO2 and roughly 5,100 tons of SO2 each day – higher than previous estimates. 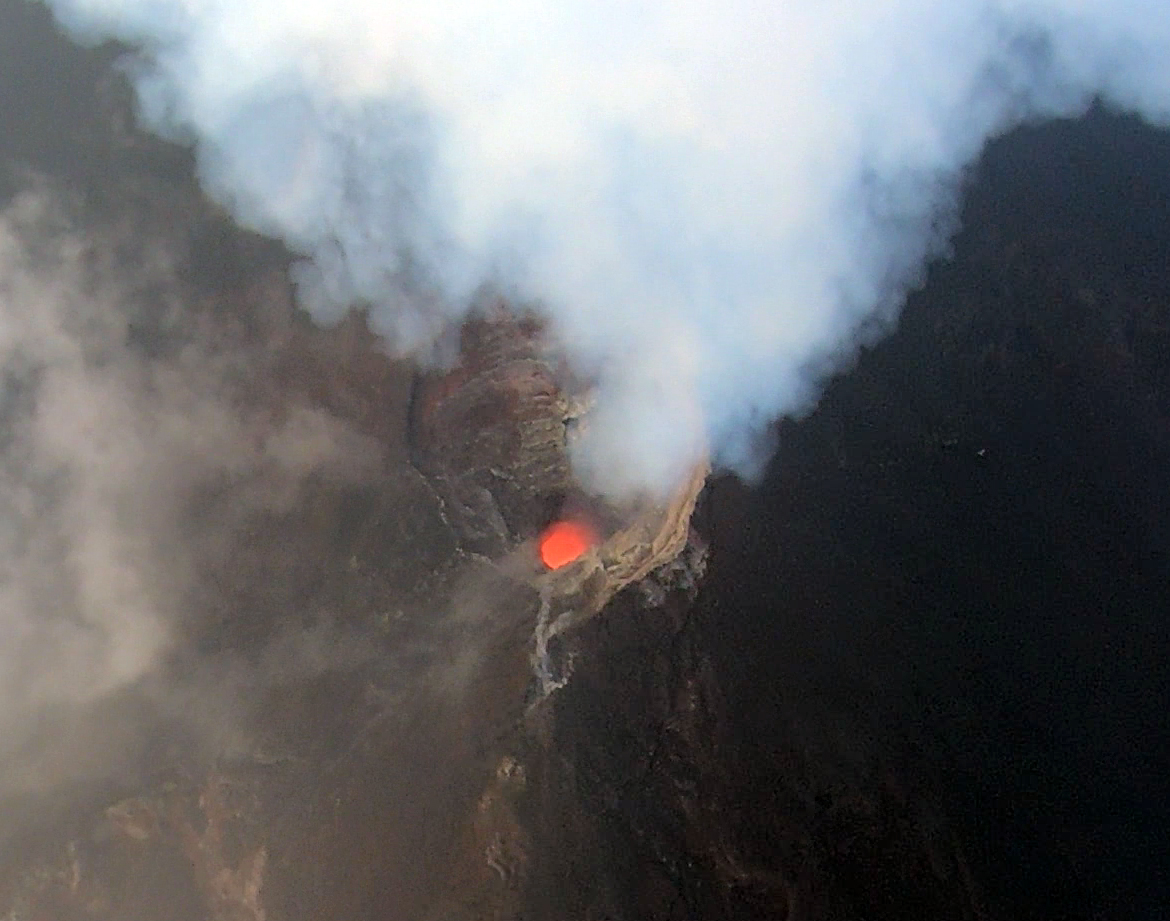 Above: Aerial view into the active vent of Manam volcano, Papua New Guinea, showing molten magma near the surface.

The team also deduced that most of Manam’s emitted carbon is likely derived from the upper mantle, and not sediments from Earth’s shallower crust, which they figured out by analysing different carbon isotopes in the gaseous mix.

“Our novel approach – that is, long-range and high-altitude [drone] operations enabling in situ measurements – is presently the only feasible means by which we can characterise gas chemistry at steep, hazardous, and highly active volcanoes like Manam,” the research team concluded in their paper.

Future research will take more diligent work from scientists and flying time from drones, since the measurements from this study spanned just 10 days.

With enough funding for equipment and training for local scientists, the strategy could be used elsewhere to monitor other dangerously inaccessible volcanoes, such as Mayon in the Philippines, and Sinabung in Indonesia.

The research was published in Science Advances.

For The First Time, Scientists Have Named a Heat Wave. Here’s Why It’s a Big Deal
Scientists Have Found A New Way to Detect Alien Worlds Beyond Our Solar System
Hundreds of Shimmering Crystal Fragments Discovered at Prehistoric Burial Site
Scientists Achieved Self-Sustaining Nuclear Fusion… But Now They Can’t Replicate It
The US Navy Put Cameras on Dolphins And The Results Are Wild