When a dead thresher shark washed up onshore, it was obvious what had killed it – a swordfish had stabbed it from behind and left a large hunk of its “sword” embedded in the beast, a new study finds.

No one saw the actual attack, so it’s unclear why the swordfish jabbed the shark. But the two ocean predators may have been competing for prey, the researchers said.

“The most likely scenario is that both species were hunting on a school of fish or on squids in the deep,” said study lead researcher Patrick Jambura, a doctoral student in the Department of Paleontology at the University of Vienna. 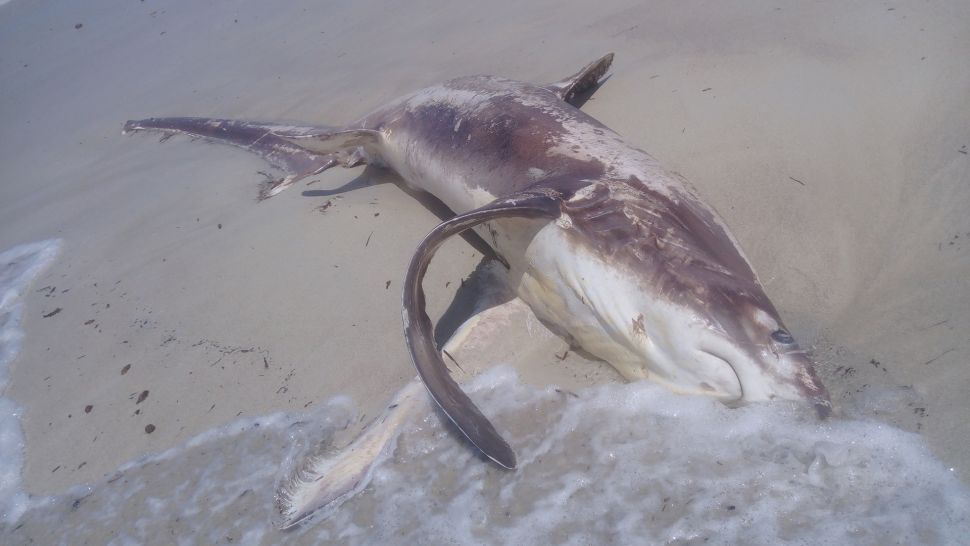 (The Ichthyological Society of Japan 2020)

It’s also possible the two ocean predators were fighting over territory, or that the swordfish accidentally stabbed the thresher shark and left nearly 12 inches (30.1 centimeters) of its “sword” in the victim, he said.

News of the fight’s deadly aftermath spread when the shark’s body washed up on the Mediterranean coast of Libya, near the town of Brega in April 2020. A local citizen scientist group learned about photos and video taken of the 14.5-foot-long (4.5 meters) dead shark.

After seeing the evidence, Jambura told Live Science “I was just stunned for a few moments”.

Swordfish (Xiphias gladius) are known to defend themselves against blue sharks (Prionace glauca) and mako sharks (Isurus oxyrinchus), as these sharks prey on swordfish.

Swordfish have also been reported attacking whales, sea turtles, inanimate objects, including boats and submarines, and even humans, Jambura and his colleagues wrote in the study.

In 2015, “a diver was killed in Hawaii when he speared a small swordfish that had wandered into a marina,” said Yannis Papastamatiou, a marine biologist at Florida International University, who was not involved in the study. “It speared him through the chest.”

Whatever the reason for the stabbing, “we know that the swordfish attacked from above – the shark was most likely not even aware of the danger [it] was in until it was too late,” Jambura said.

(The Ichthyological Society of Japan 2020)

It appears that the roughly 10-foot-long (3.1 m) swordfish stabbed the shark just behind the head, leaving a cut 2 inches (5 centimeters) deep and 3 inches (8 cm) wide where it pierced the shark’s gill system.

Because no one performed a necropsy (an animal autopsy), there’s no way to know whether that caused deep internal damage, “but from the angle and the depth of penetration, it is safe to say that the gill region was heavily damaged, possibly also some important arteries,” Jambura said.

While this is the first reported case of a swordfish killing a thresher shark, scientists don’t know how often this happens in the water’s depths.

“We rarely see evidence of these outcomes: Sharks are negatively buoyant and will sink when they die,” Papastamatiou told Live Science in an email. “Unless they wash up on the beach like here (which is rare, most will sink into the deep sea), then we won’t find evidence of the interaction.”

The swordfish left the altercation physically damaged, but that doesn’t mean the fish died; there are known cases of billfish (a close relative of the swordfish) that have damaged, malformed or even missing rostra (or its pointy “sword”) that “were apparently still in good physical shape,” the researchers wrote in the study. Perhaps the assailant survived.

The study was published online Oct. 7 in the journal Ichthyological Research.

Minor Google meltdown exposes the world’s utter reliance on a single tech company
Scientists Put Trackers on Moths, And It Revealed an Incredible Journey in The Sky
Deepwater Horizon Oil Spill Still Detectable 10 Years Later, Scientists Say
Mysterious jets of upside-down lightning are real, and we just got our best look yet
Gorillas Have Invented A Unique Vocalization to Get Zookeeper’s Attention