A long-lost piece of Stonehenge that was taken by a man performing restoration work on the monument has been returned after 60 years, giving scientists a chance to peer inside a pillar of the iconic monument for the first time.

In 1958, Robert Phillips, a representative of the drilling company helping to restore Stonehenge, took the cylindrical core after it was drilled from one of Stonehenge’s pillars – Stone 58. Later, when he emigrated to the United States, Phillips took the core with him.

Because of Stonehenge’s protected status, it’s no longer possible to extract samples from the stones. But with the core’s return in 2018, researchers had the opportunity to perform unprecedented geochemical analyses of a Stonehenge pillar, which they described in a new study.

They found that Stonehenge’s towering standing stones, or sarsens, were made of rock containing sediments that formed when dinosaurs walked the Earth. Other grains in the rock date as far back as 1.6 billion years.

Sample of the core from Stone 58 (British Geological Survey)

Related: In photos: A walk through Stonehenge

“We have CT-scanned the rock, zapped it with X-rays, looked at it under various microscopes and analyzed its sedimentology and chemistry,” said study lead author David Nash, a professor of physical geography at the University of Brighton in England.

“With the exception of thin-section analyses and a couple of the chemical methods, all of the techniques we used in the study were new both to Stonehenge and the study of sarsen stones in the UK,” Nash told Live Science in an email.

Stonehenge’s central circle of pillars was erected during the Neolithic period, about 2,500 years ago, according to English Heritage, a nonprofit organization that manages historic monuments in England.

“Sarsens were erected in two concentric arrangements – an inner horseshoe and an outer circle – and the bluestones [smaller monument stones] were set up between them in a double arc,” English Heritage said on its website.

When the scientists peered through a microscope at thin slices of sarsen rock from Stone 58, they were surprised to discover that the stone was 99.7 percent quartz. A quartz “cement” held fine-to-medium quartz grains and formed “an interlocking mosaic of crystals,” Nash said.

That made the rock more durable, and it may have been why the builders chose that type of rock for their massive monument thousands of years ago.

“These cements are incredibly strong. I’ve wondered if the builders of Stonehenge could tell something about the stone properties, and not only chose the closest, biggest boulders, but also the ones that were most likely to stand the test of time,” Nash said. 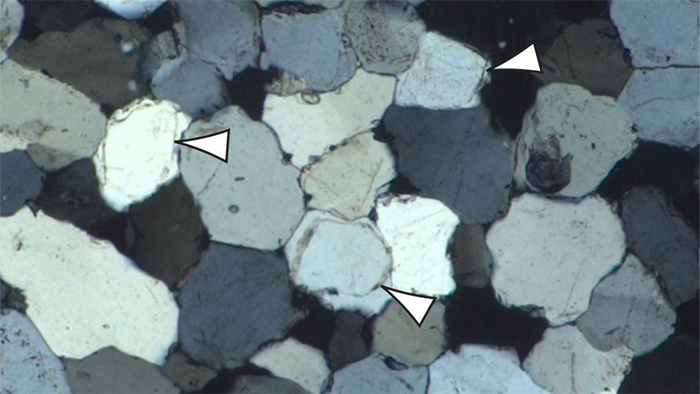 (Trustees of the Natural History Museum)

Above: Microscope image from the sarsen sample showing the tightly interlocking mosaic of quartz crystals that cement the rock together. The outlines of quartz sand grains are indicated by arrows.

The researchers’ analysis also revealed clues about the ages of sediments in the rock, Nash said in the email.

“The sandy sediments within which the stone developed were deposited during the Paleogene period, 66 [million] to 23 million years ago, so the sarsens can be no older than this,” he explained.

However, when the scientists compared ratios of neodymium isotopes – or atoms of the element with a different number of neutrons in the nucleus – in the samples, they found that certain sediments in the sarsen stone were even more ancient.

Some grains were likely eroded from rocks dating to the Mesozoic era (252 million to 66 million years ago), when they may have been trodden upon by dinosaurs.

And some of the sand grains formed as long ago as 1 billion to 1.6 billion years ago, Nash said.

While this analysis answered some questions about Stonehenge, other unresolved puzzles remain, among them the whereabouts of two more cores that were drilled from Stone 58 during the 1958 restoration, and which also vanished from the record.

Workers at the Salisbury Museum in England discovered part of one of those cores in their collection in 2019, the researchers reported. Museum director Adrian Green contacted a representative at English Heritage, reporting the discovery of a portion of a core from Stone 58 “in a box marked ‘3x Stonehenge Stones from ‘Treasure Box,'” according to the study.

The scientists investigated the Salisbury fragment alongside the Phillips core, and recorded its data in their study. However, “how and when it came to be at the museum was unknown,” the authors wrote.

The location of the third core (and the rest of the core found at the Salisbury Museum) “is similarly unknown,” the scientists said.

The findings were published August 4 in the journal PLOS One.

The deep seas near New Zealand have yielded 6 new species of bizarre sponges
It’s not ‘weakness’ to change your mind about something like vaccines. Here’s why
Ice melt at the poles is now causing hidden changes to Earth’s crust on a huge scale
This one tiny animal has found a way to give up sex completely, and still do fine
A major advance in computing solves a complex math problem 1 million times faster