The mata mata turtle of South America is known for its camouflage, blending in effortlessly with the plant detritus, rocks and algae of its freshwater homes. But little did we realise that it was also hiding an entire species.

Yep – what we thought was a single species of turtle in the Chelus genus has now turned out to be at least two, discovered through rigorous genomic analysis.

No wonder it looks so delightfully smug.

“Although these turtles are widely known due to their bizarre looks and their unusual feeding behaviour, surprisingly little is known about their variability and genetics,” said herpetologist Uwe Fritz of the Senckenberg Natural History Collections in Germany.

“Until now, we assumed that there is only one species of this armoured reptile that ranges widely across South America.”

It is possible for a wide variety of physical differences within a species group – take giant squids, for example. But scientists had noticed that how mata mata turtles look seems to vary according to region. This prompted speculation that the genus has been harbouring a second species. 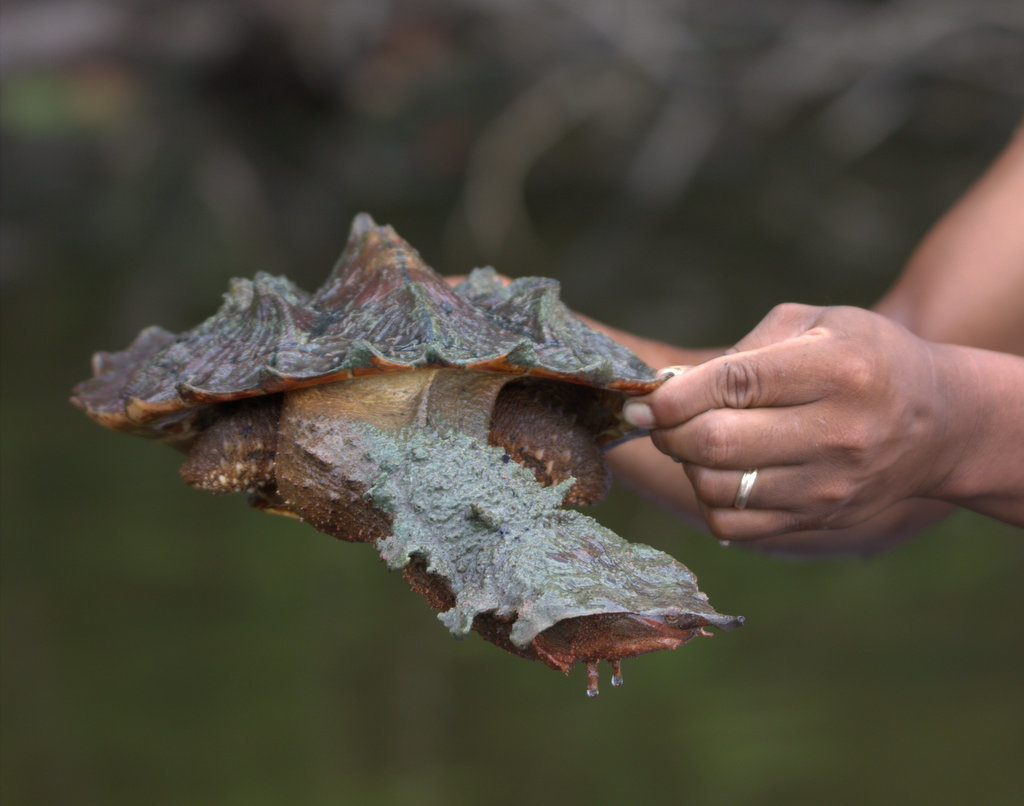 A mata mata turtle found in Guyana in 2015. (bruceebennett/iNaturalist/CC BY-NC 2.0)

These characteristics aid the turtle’s peculiar hunting strategy. They lurk at the bottom of a body of water, neatly camouflaged, waiting for fish to swim a bit too close. Then, the head snaps out, and that large mouth opens wide, sucking the prey in like a vacuum.

So, the researchers collected 75 DNA samples from mata mata turtles across the entire distribution range, and ran them through mitochondrial analyses. They also conducted a survey of the turtles’ morphological characteristics, and compared it to their DNA findings.

Not only did the DNA results show two distinct lineages, these matched up with the morphological differences.

The old species, Chelus fimbriata, lives in the Amazon and Mahury regions. It has a dark underside, and a more rectangular shell.

The new species has been named C. orinocensis, and it inhabits the Orinoco and Río Negro basins. The underside of its shell is unpigmented, and the overall shape of the shell is more oval.

According to the team’s analysis, the two species started to diverge about 12.7 million years ago, during the late Miocene. This was around the same time that the combined Amazon-Orinoco Basin split into two.

As well as revealing a previously unknown diversity in this turtle species, the finding has implications for conservation. Previously, the mata mata turtle population was considered homogeneous, widespread and healthy. Now, we have to rethink that.

“To date, this species was not considered endangered, based on its widespread distribution. However, our results show that, due to the split into two species, the population size of each species is smaller than previously assumed,” said biologist Mario Vargas-Ramírez, formerly at Senckenberg and now at the National University of Colombia.

“In addition, every year, thousands of these bizarre-looking animals end up in the illegal animal trade and are confiscated by the authorities. We must protect these fascinating animals before it is too late.”

The research has been published in Molecular Phylogenetics and Evolution.

Scientists discover a new type of chemical bond, and it’s surprisingly strong
Earliest animal cave art on record has been found in Indonesia, and it’s adorable
It’s official: NASA has given up on its robotic digger on Mars
Which came first: sleep or the brain? Scientists think they’ve found the answer
Calculations show it’ll be impossible to control a super-intelligent AI