Now we have evidence that such fancy and impractical flamboyance was a thing well before modern birds even evolved.

A chicken-sized dinosaur with a dense mane of thick hair-like structures running down its back may also have ridiculously strutted and waved fancy decorative filaments in an attempt to seduce a mate 110 million years ago in Gondwana.

X-rays of a fossil in a limestone slab from the Crato Formation in what’s now northeast Brazil revealed strange ornamental soft-bodied features unlike any seen before in dinosaurs. As well as a thick mane of filaments running down its back and limbs, this now fossilised beastie was also adorned with strange, long, and stiff ribbons that waved from its sides.

“Given its flamboyance, we can imagine that the dinosaur may have indulged in elaborate dancing to show off its display structures,” said University of Portsmouth palaeobiologist David Martill.

As well as mate attraction, the filaments – composed of keratin just like feathers and our hair – could also have been used for communication, inter-male rivalry or to frighten off foes.

“The simplicity of the structures precludes the interpretation that they represent complex feathers,” the team – lead by Robert Smyth from the University of Portsmouth – wrote in their paper. 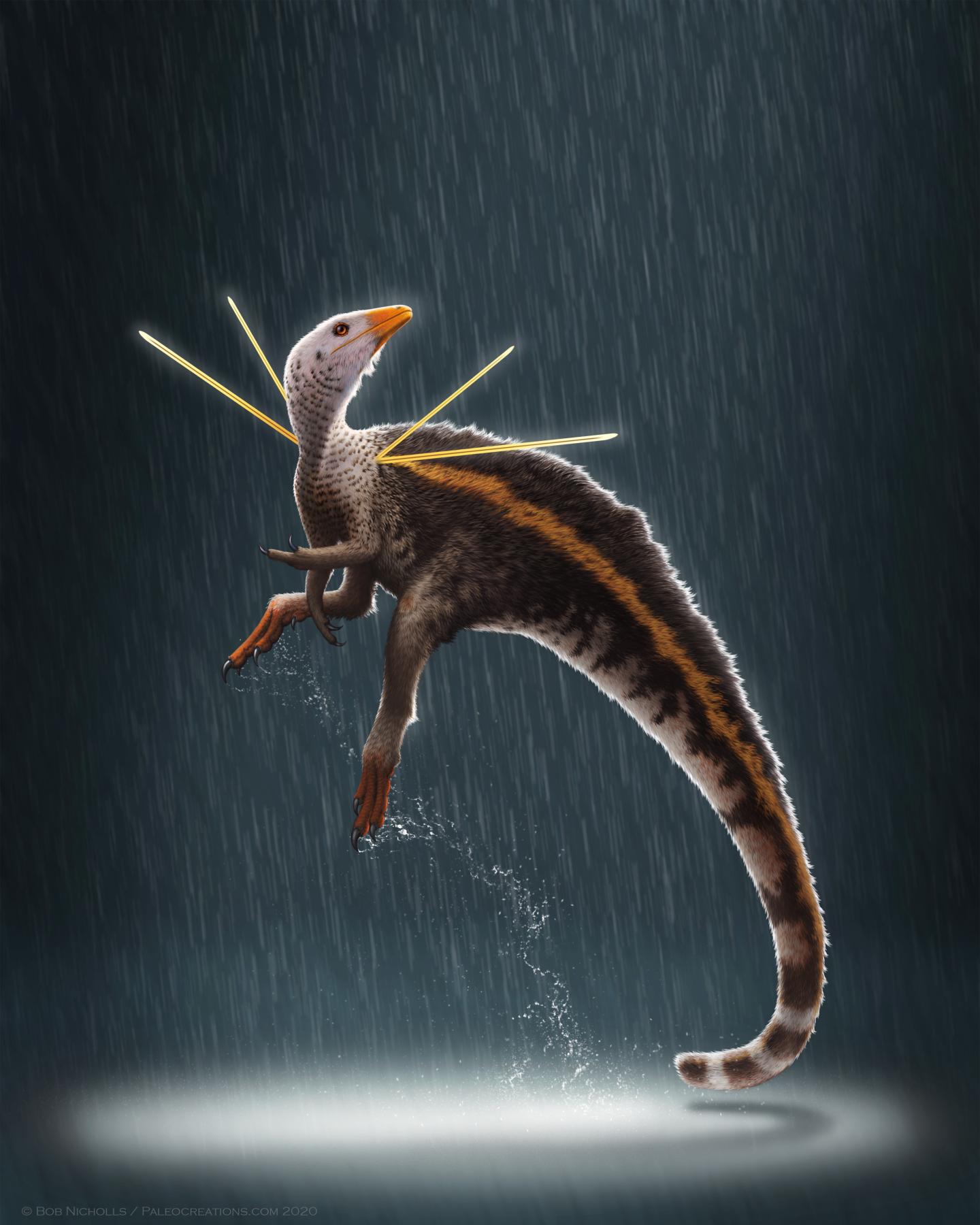 While the international team of researchers couldn’t quite make out exactly where the elongated filaments emerged, because the ends closest to the body hadn’t been clearly preserved, they estimate these unusual structures protruded around 140 to 150 mm from the dinosaur’s shoulders.

They named the species Ubirajara jubatus, and it’s the first dinosaur found in Gondwana with evidence of feather precursors.

This is also the first time such an ornate integument structure (the body system that includes skin, hair, hooves, etc.) has been identified in non-avian dinosaurs. The ribbon-like filaments are positioned in such a way that they don’t interfere with the animal’s movements –  which would make sense, given that these dinosaurs are thought to have been opportunistic predators of small vertebrates and so needed to remain agile to survive.

The team also identified potential follicles from which its body fuzz could have protruded from, suggesting that like modern birds, these dinosaurs could raise and move the position of their hair-like structures.

“In extant birds, feather mobility facilitates diverse functions including streamlining, thermoregulation and social signaling, all of which would have also conferred adaptive advantages for non-avian theropods,” the team explained.

The specimen, housed in the State Museum of Natural History Karlsruhe in Germany (to the dismay of some Brazilian palaeontologists), was incomplete, as parts are thought to have been lost when quarrymen split the limestone slab. But enough was there for the team to observe features of Ubirajara’s skeleton, such as an incompletely fused sacrum –  the spine bones that connect to the pelvis –  suggest the dinosaur was a juvenile.

The only other known theropod (hollow boned dinosaurs that include modern birds) to have such crazily modified filaments on or near their upper limbs, is the still living bird-of-paradise Semioptera wallacii.

“These modified feathers are obvious display structures, showing no other apparent function, and are fundamental to a male’s reproductive success,” the authors wrote of the birds. A bird-of-paradise perches on a branch. (Cagan Hakki Sekercioglu/Moment/Getty Images)

Sinosauropteryx was the first non-avian dinosaur found with filaments in 1996 and changed how we think of dinosaurs, and Ubirajara now adds to our understanding of feather evolution. If even the simplest filaments could be effectively modified into a display feature, it’s unlikely that development of complex display structures is what drove the evolution of feathers, the team points out.

“Ubirajara shows us that this tendency to show off is not a uniquely avian characteristic, but something that birds inherited from their dinosaur ancestors,” Smyth concluded.

Their study was published in Cretaceous Research.

Ancient Maya Used Ashes of Rulers to Make Rubber Balls, Some Researchers Suggest
These Asteroid Particles May Be Our Most ‘Pristine’ Sample of The Outer Solar System
Weird Creature With No Butt May Not Be Our Ancient Ancestor After All
Helping Your Kid With Homework Probably Isn’t Benefiting Them Like You Think It Is
A Snake-Lover Built Robotic Legs For a Snake, and It’s Insane