The ‘penis bone’, or the baculum, is one of the most mysterious structures in mammal biology. To this day, no one really knows what it does or why it’s gone missing in humans, horses, elephants and a few other species.

A 3D analysis of 82 penis bones from different animals has now found some of the most oddly-shaped bacula could very well prolong sex, induce ovulation in the female, or shovel out sperm from other romantic encounters.

The penis bone in the male honey badger, for instance, has one of the wackiest appearances. It’s shaped almost like an ice-cream scoop, and this development might have evolved to fend off competition and ensure a male’s offspring are actually his.

In the study, complex shapes weren’t related to the size of an animal’s testes, but they were weakly correlated with longer bouts of copulation and induced ovulation, which suggests these bones help to reduce sexual competition.

While prior studies have shown the width of penis bones is somehow tied to more offspring in the house mouse, we still don’t know why that is. The theory that these male penis bones somehow prolong intercourse and beat out competition has been brought up before, but the results have been mixed.

Maybe because we’ve been overlooking one of the most important features.

“The reason natural historians are so fascinated by bacula is because they have lots of unusual features: odd ridges and grooves, strange curvature and bizarre-shaped tips,” lead author and biologist Charlotte Brassey from Manchester Metropolitan University said in 2018 about the team’s previous study.

“Our study is particularly novel in taking a 3D approach to understanding the evolution of the penis bone. However, all of the previous attempts to study the baculum have simplified the bone into very basic measurements of length and width, and have ignored all this important shape information.”

While penis bones vary dramatically in size and shape depending on the species, the findings of Brassey and team’s current analysis suggest the most ‘complex’ penis bones, including those with elaborate tips, hooks, scoops and urethral grooves, are commonly found among carnivores and, strangely enough, monogamous species.

Unlike other penis bones that come to a blunt and abrupt end, it’s thought that animals with more elaborate tips evolved under stronger sexual competition.

“Yet, contra to our expectations, ‘socially monogamous’ species are found to possess high values for optimal baculum complexity,” the authors write.

At first, this doesn’t make sense; monogamous partners would surely face less sexual competition after copulation than those species who mate with multiple males.

Still, the authors explain, social monogamy is not equivalent to genetic monogamy. The African wild dog, for instance, is classified as monogamous, but there’s evidence of communal breeding happening on the sly anyway.

Polygamous seals and sea lions, on the other hand, face far less sexual competition because they live in harems where one male mates with multiple females. Interestingly, pinniped bacula end in a relatively simple tip, while the penis bone of wolves and dogs show deep urethral grooves and evidence of bulbus glans attachments. 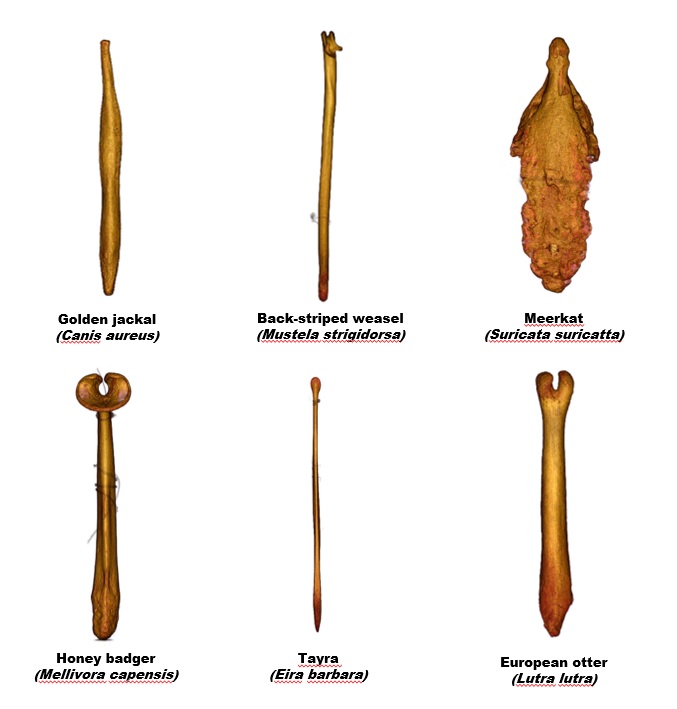 The current study, which was based on X-rays of modern museum samples, is one of the most rigorous analyses of penis bones among carnivores. Unfortunately, however, the three-dimensional nature of female genitals has been historically overlooked and is much less understood.

As such, we can’t say for sure how the penile bones actually work during sex, so in the future, the team hopes to analyse these structures from within the female’s reproductive tract.

Such research could allow us to better understand the function of the baculum during sex, although we might be putting too much emphasis on the bone itself. After all, analysing one single, ossified element says little about the complexity of the glands or the cartilage that sits on top.

“This element is currently absent from most museum specimens and hence from our analysis,” the authors admit.

“Likewise, our analysis implicitly assumes baculum complexity to be an accurate proxy for penile shape complexity.”

Future research also needs to incorporate soft tissue from the penis, so we can better understand how and why the baculum evolved the way it did among different species – and why some species, like ourselves, are lacking one.

“As mammals, and as apes more specifically, it is unusual that humans do not have a penis bone,” says Brassey.

“By studying the role of the baculum during mating, we also hope to shine further light on why some mammals, including humans and hyenas, can be so successful at reproducing without a baculum.”

The study was published in the Proceedings of the Royal Society B.

Enjoy it while it lasts: Dropping oxygen will eventually suffocate most life on Earth
How did this skull end up all alone in a cave in Italy? We finally have an answer
The latest chatbots are capable of ‘resurrecting’ the dead – if we let them
For The First Time, A ‘Space Hurricane’ Has Been Detected Over The North Pole
Eiffel Tower-sized asteroid zipping by Earth in dress rehearsal for closer 2029 flyby