Growing microbes in a petri dish is pretty simple – swab basically anything, wipe it on an agar plate, let it sit for a few days in a warm room and presto! You’ve grown some new furry friends.

But the microbial species you can cultivate in a petri dish are only a tiny fraction of the bacteria, archaea and other microorganisms that would have been picked up by the swab - only the ones suited to the conditions you grew them in.

The overwhelming majority of them do not like the environments we can provide, and therefore won’t obediently grow in a petri dish.

Now, an international team of researchers has found 12,556 new species of bacteria and archaea that have never been grown in a lab, using an incredibly cool technique called metagenomics.

“We were able to reconstruct thousands of metagenome-assembled genomes (MAGs) directly from sequenced environmental samples without needing to cultivate the microbes in the lab,” said DOE Joint Genome Institute geneticist and first author, Stephen Nayfach.

“What makes this study really stand out from previous efforts is the remarkable environmental diversity of the samples we analysed.” 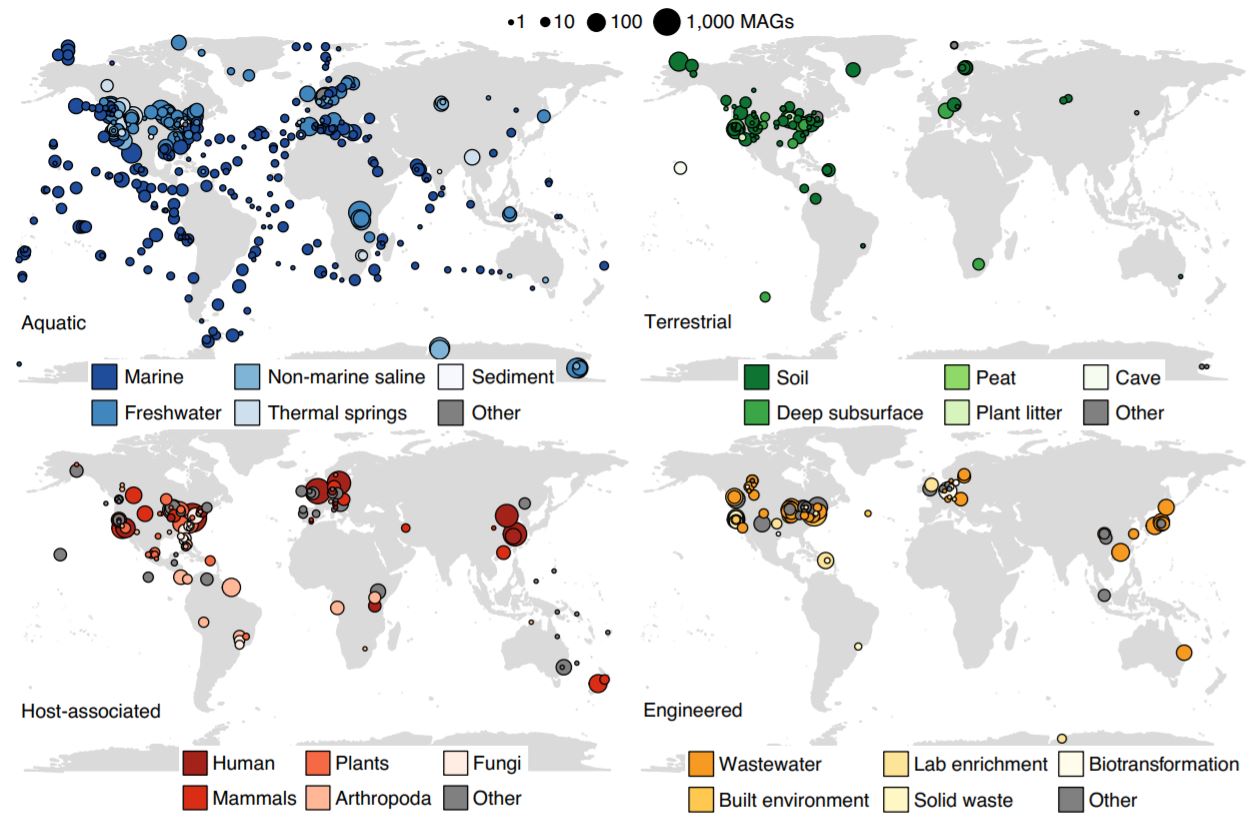 A map of the locations and types of MAGs sequenced. (Nayfach et al., Nature Biotechnology, 2020)

The team had access to a huge database of over 10,000 metagenomes – a term meaning all of the genetic material from an environmental sample. Any DNA they can extract is cloned and then sequenced using tiny strands of genome, before they try to fit these short pieces of DNA all together again.

It sounds like trying to reassemble a jigsaw puzzle that’s been put through the blender, but using a technique called ‘binning’, the team was able to piece together 52,515 MAGs from the data – many of them high quality, and all having over 50 percent of their genome complete.

The team isn’t the first to find microbes using metagenomics – back in 2018 we wrote about scientists discovering 16 giant viruses, while in 2017 scientists found 20 new evolutionary branches in the tree of life using these methods.

But in this new work, the researchers were trying to analyse samples from across a huge range of areas to fill in some of the gaping holes we have in our knowledge of microbes.

“We performed metagenomic assembly and binning on 10,450 globally distributed metagenomes from diverse habitats, including ocean and other aquatic environments, human and animal host-associated environments, as well as soils and other terrestrial environments, to recover 52,515 MAGs,” the team writes in their paper.

“The catalogue expands the known phylogenetic diversity of bacteria and archaea by 44 percent.”

When the team checked against genomes from isolates, MAGs from previous studies, and genomes from single cells, they found that 12,556 of the 50,000 MAGs had never been sequenced before.

Now, it’s important to note that these genomes are not as good as the ones that you would get from growing bacteria and archaea in a lab, and then sequencing them. The binning process might mix up some pieces of genome between the bacterial species, and chunks of the genome will often be missing; but without the ability to grow these particular species in a lab, it’s still an incredible way to discover the microbes in the world around us.

“Looking across the tree of life, it’s striking how many uncultivated lineages are only represented by MAGs,” Nayfach said.

“While these draft genomes are imperfect, they can still reveal a lot about the biology and diversity of uncultured microbes.”

The research has been published in Nature Biotechnology.

The Star Betelgeuse Went a Little Dim in 2019. Astronomers Think They Know Why
Hubble’s Closeup of The Orion Nebula Looks Like a Surreal Dreamscape
The human brain may not be shrinking after all
Plants Have Been Keeping a Secret From Us About How Thirsty They Actually Are
It Really Is in Your Head: Thinking Hard and Long Can Cause Brain Drain