Confirming a new species of octopus usually involves lab tests and dissections. Not so with the Grimpoteuthis imperator dumbo octopus that has just been identified, with non-invasive scanning doing almost all of the work.

Discovered in the northern part of the Emperor Seamounts, an underwater mountain ridge in the northwest Pacific Ocean, researchers identified G. imperator through a combination of high-field magnetic resonance imaging (MRI) and micro-computed tomography (micro-CT) scans, plus minimally invasive gene analysis carried out on tissue samples.

Standardized measurements and digital photos were also analyzed to confirm that G. imperator does indeed stand alone as a species. The researchers who made the discovery have suggested common names for it such as Emperor dumbo, Dumbo impérial (French), and Kaiserdumbo (German).

A right-side view of the octopus with 3D model overlay of its organs. (Christina Sagorny et al, BMC Biology, 2021)

“In zoology, species descriptions conventionally rely on invasive morphological techniques, frequently leading to damage of the specimens and thus only a partial understanding of their structural complexity,” write the researchers in their published paper.

“Here, we present a combination of entirely non-invasive as well as minimally invasive methods that permit taxonomic descriptions of large zoological specimens in a more comprehensive manner.”

Considering how rare these finned, or dumbo, octopods are, the less dissection that takes place the better. Although there aren’t many of them, they still play a major role in deep-sea habitats going down to around 7,000 meters (22,966 feet) underwater.

Details including the shape of the shell, gills, and digestive tract, plus variations in the nervous system and sensory organs, helped to mark out this dumbo octopus as being a separate type. Some of the information the researchers were able to glean, such as the form of the systemic heart, haven’t been described in octopus species before. 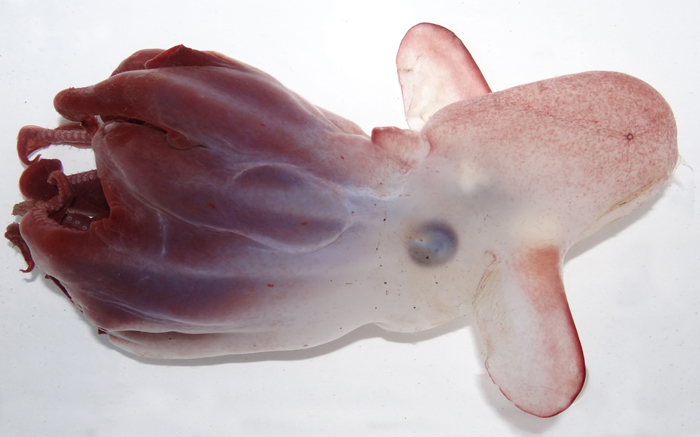 The shell form, fin position, and arm length of this octopus identify it as from the genus Grimpoteuthis. They’re often given the name dumbo because of their similarity to the classic Disney elephant character of the same name, thanks to two large head fins that you can see in the picture above.

The sort of non-invasive scanning technology deployed here is becoming more popular for identifying new groups in the animal kingdom, but up until now, it’s mostly been used for smaller creatures. This study shows that it can work on larger specimens, too.

Being able to return marine life like G. imperator back to its original habitat makes a big difference in efforts to leave these kinds of fragile ecosystems as untouched as possible – and there are likely to be plenty more discoveries to come.

“The MRI and micro-CT datasets we have obtained here and which are publicly available from the repository MorphoBank could be used for further analyses that would not have been possible to this extent using conventional, invasive techniques,” says zoologist Alexander Ziegler, from the University of Bonn in Germany.

“This may allow other researchers to draw conclusions about the lifestyle and behavior of hard-to-observe deep-sea organisms.”

The research has been published in BMC Biology.