Stick a turtle’s beak on a baby hippo. Then twist its front legs so they stick out to either side, but keep its back legs straight. And give it tusks. Presto, you have something that looks a little bit like a prototype mammal-like animal that walked the planet hundreds of millions of years ago.

These creatures are called dicynodonts, a term that means “two dog teeth”, in reference to the impressive pair of canines protruding from the animal’s mouth. And it’s those teeth that could tell us why you’ll never find tusks on anything with feathers or scales.

“Tusks are this very famous anatomy, but until I started working on this study, I never really thought about how tusks are restricted to mammals,” says Megan Whitney, a researcher in evolutionary biology from Harvard University.

Strictly speaking, dicynodonts aren’t mammals themselves, but belong to an extinct group of relatives called therapsids.

They fluctuated in range and diversity from the Permian until their eventual extinction in the Triassic about 200 million years ago, ranging in size from something you can hold in your hand to elephantine behemoths.

They were also nothing if not successful, putting their mash-up of anatomy to good use across a range of ecological niches. 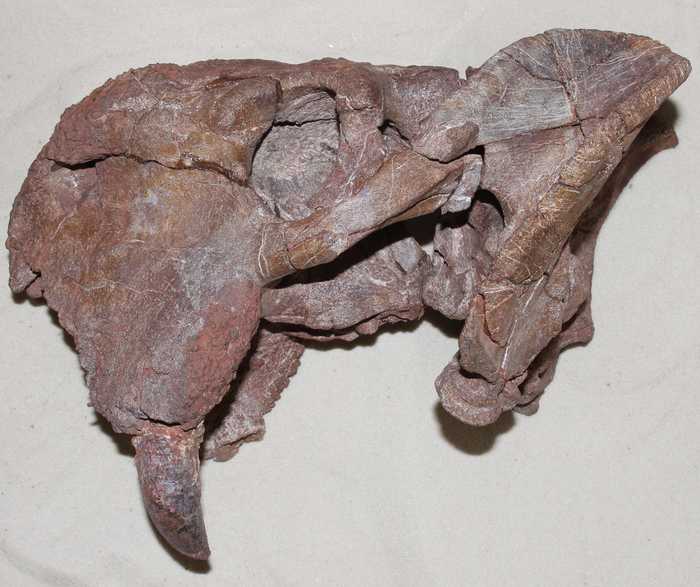 Above: Skull of the dicynodont Dolichuranus, from Tanzania. The large tusk is visible at the lower left.

Those protruding teeth have attracted a lot of attention since the first dicynodont fossils were scrutinized more than 150 years ago. The famous paleontologist Richard Owen gave us the first real insight into the teeth in 1845, claiming they were mostly made of dentine, with thin layers of enamel and cementum, and a rather open pulp cavity.

Since then, studies on other specimens have pointed out a lack of dentine, throwing in suggestions that much like rabbit’s teeth (and, for that matter, tusks of modern animals like elephants and walruses), the canines didn’t stop growing. At least in some species.

Understanding precisely how teeth grow is important if we’re to know how an extinct animal behaved.

But it also poses an interesting philosophical question, one that has consequences for understanding our own evolution.

“For this paper, we had to define a tusk, because it’s a surprisingly ambiguous term,” says Whitney.

Just so we’re all on the same page, here’s what they came up with.

Usually when we talk about tusks, we refer to teeth that poke a considerable distance from the oral cavity. Think walruses and mammoths, not to mention warthogs, and much smaller mammals called hyraxes.

To set their stand-out teeth apart from the jagged chompers of a crocodile, true tusks are defined by continuous growth, making them literally long in the tooth.

What about rats and rabbits? Their long teeth might continue to grow, but are constantly coated in a hard-wearing surface called enamel.

Tusks don’t bother. Coating them with enamel would sure help make them tougher, but their oblique angles make it nigh impossible for a body to lay down a consistent coat.

Lastly, tusks are firmly held in place by a ligament that helps them sustain the occasional hard knock.

All of these features reflect the use and abuse tusks suffer in contrast to most other teeth. They’re commonly used to dig through muck, and to combat rivals and predators, so they need to be durable enough to do the job but still regenerate easily when damaged.

Looking at a range of dicynodont teeth, the researchers echoed previous findings of considerable variety among the famous old canines. Not only were true tusks more likely to be found in newer dicynodont species, they’d evolved independently from non-tusks across their family tree.

Knowing the steps teeth took to evolve in these ancient animals, along with a clear definition of the tusk’s characteristic features, we now have a clearer understanding of why they don’t appear in lizards, fish, or amphibians.

“For instance, this study shows that reduced rates of tooth replacement and a flexible ligament attaching the tooth to the jaw are needed for true tusks to evolve,” says Ken Angielczyk, a curator at Chicago’s Field Museum.

“It all ladders up to giving us a better understanding of the tusks we see in mammals today.”

This research was published in Proceedings of the Royal Society B Biological Sciences.