Scientists studying one of the fastest-warming regions of the global ocean say changes in this region are so sudden and vast that in effect, it will soon be another limb of the Atlantic Ocean, rather than a characteristically icy Arctic sea.

The northern Barents Sea, to the north of Scandinavia and east of the remote archipelago of Svalbard, has warmed extremely rapidly – by 2.7 degrees Fahrenheit (1.5 degrees C) just since the year 2000 – standing out even in the fastest-warming part of the globe, the Arctic.

“We call it the Arctic warming hot spot,” said Sigrid Lind, a researcher at the Institute of Marine Research in Tromso, Norway.

Now Lind and her colleagues have shown, based on temperature and salinity measurements taken on summer research cruises, that this warming is being accompanied by a stark change of character, as the Atlantic is in effect taking over the region and converting it into a very different entity.

Their results were published this week in Nature Climate Change by Lind and two colleagues at Norway’s Institute of Marine Research and University of Bergen.

They underscore that the divide between the Atlantic and the Arctic isn’t just a geographical one – it’s physical in nature.

While the Southern Barents is milder, the northern Barents has – until recently – had all the characteristics of an Arctic sea. It featured floating sea ice that, when it melted, helped to provide an icy, freshwater cap atop the ocean.

This kept internal heat from escaping to the atmosphere, and also kept the ocean “stratified” – cold, fresher waters in the upper part of the ocean and warmer, Atlantic-originating waters down below.

This situation, which obtains in much of the Arctic, was reinforced by the fact that freshwater is less dense than salt water, preserving stratification.

But that’s changing. Less sea ice is floating down through the northern Barents Sea from higher Arctic latitudes, the research shows.

Indeed, the lack of sea ice in the northern Barents Sea has been a regular feature of charts lately; at this very moment, an enormous stretch of ocean in this area that has traditionally been ice covered is currently open. 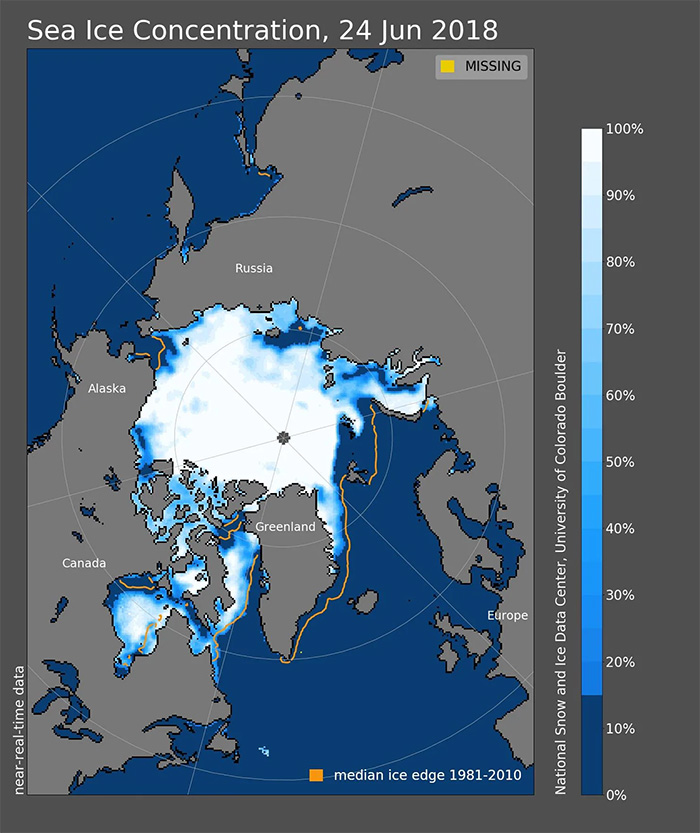 As the ice recedes, the ocean surface in turn receives less fresh water from its melting.

As that happens, the deeper Atlantic waters mix higher and higher toward the surface, not only warming the seas but also making them more salty.

The result, the study says, has been a “dramatic shift in the water column structure in recent years.” Arctic surface waters, with a temperature below freezing, are “now almost entirely gone.”

“This region is shifting to the Atlantic climate, and it’s going fast,” Lind said.

The precipitating event for these changes, the new study finds, is that floating ice is no longer being supplied as regularly to the Barents Sea region from higher Arctic climes.

Arctic sea ice breaks up and becomes more mobile in the warmer months of the year, but less has been flowing into the Barents Sea and melting, and that in turn has begun to break the hold of stratification on the ocean, as the Barents no longer contains enough freshwater to sustain it.

“Unless the freshwater input should recover, the entire region could soon have a warm and well-mixed water column structure and be part of the Atlantic domain, a historically rare moment where we would witness a large body of water being completely transformed from Arctic to Atlantic type,” the study concludes.

The change could lead to an expansion of the very productive Barents Sea cod fishery northward – but at the same time, that would come at the expense of an Arctic marine ecosystem that would probably have to retreat toward the pole.

It could also have major weather consequences, some scientists believe. Indeed, those may already be occurring.

Jennifer Francis, an Arctic expert at Rutgers University, said ice loss over the Barents Sea and the nearby Kara Sea can disrupt the atmospheric jet stream, in turn leading to extreme weather over Eurasia, especially in winter.

Here’s how it works, according to Francis: The warmer atmosphere above the ice free ocean can strengthen a region of atmospheric high pressure that tends to form around the Ural Mountains, to the south of these bodies of water.

That then leads to an elongation of the polar jet stream, which dips farther southward as it gets past the high pressure region and forms a low pressure area.

The result of this elongated jet, Francis wrote, is “persistent cold spells over East Asia and a disrupted stratospheric polar vortex, which effectively prolongs the original influence of the ice loss into late winter. We saw this happen in spades this past winter.”

There could be more of this in the future, because researchers say changes in the northern Barents Sea may have already gone too far to reverse.

“What we show is the sea ice will probably move out of the Barents Sea completely and not come back,” Lind said.

The human mind is not meant to be awake after midnight, scientists warn
Bright green meteors seem to be raining down on New Zealand, but why?
Stunning ‘Blue’ Ripples on Mars Reveal The Way The Wind Blows
Earth Just Had Its Shortest Day on Record, Thanks to a ‘Wobble’
Scientists Glimpse The Earliest Dark Matter Ever Observed in the Universe