If they’re right, this would be the oldest evidence of a flesh-eating bony fish belonging to a group that is genetically not even related to the piranha.

Before this recent discovery, it was thought that bony fish from the Jurassic could only crush shells or swallow their prey whole; but this new find clearly had the maws for gobbling on the fins and flesh of fellow swimmers.

“We were stunned that this fish had piranha-like teeth,” says lead author Martina Kölbl-Ebert, a paleontologist at Jura-Museum Eichstätt, where the fossil is currently being kept.

“It comes from a group of fishes (the pycnodontids) that are famous for their crushing teeth. It is like finding a sheep with a snarl like a wolf.”

Not only does the remarkable new species share the piranha’s wolfish grin, its victims were also found in the same limestone deposits in South Germany (incidentally, this deposit also contained Archaeopteryx).

In a world where survival of the fittest is all that matters, getting nibbled on is humiliating enough. Now imagine that shame being fossilised for 150 million years.

“We have other fish from the same locality with chunks missing from their fins,” says co-author David Bellwood, a researcher in the evolution and ecology of reef fish from James Cook University.

“This is an amazing parallel with modern piranhas, which feed predominantly not on flesh but the fins of other fishes. It’s a remarkably smart move as fins regrow, a neat renewable resource.”

“Feed on a fish and it is dead; nibble its fins and you have food for the future,” Bellwood added.

It’s this sort of exploitative yet renewable behaviour that has led the researchers to describe the new species as a “staggering example of evolutionary versatility and opportunism.”

After close inspection, the fossilised fish was found to have extremely strong jaws, revealing long, pointed and slightly curved teeth. Some of the incisors even came with serrated edges, just perfect for slicing flesh or fins, the researchers report.

While its flat body would have slowed it down somewhat, its large fins would have made it particularly adept at manoeuvring in the reefs of shallow tropical waters, where scientists suspect it lived.

Playing to its strengths and against its weaknesses, the researchers suggest that the bony fish would sneak up on its prey in a crowd of fish, making a mad dash for a chunk of flesh or fins when the opportunity arose.

The victims found nearby had injuries that would support this hypothetical hunting pattern. 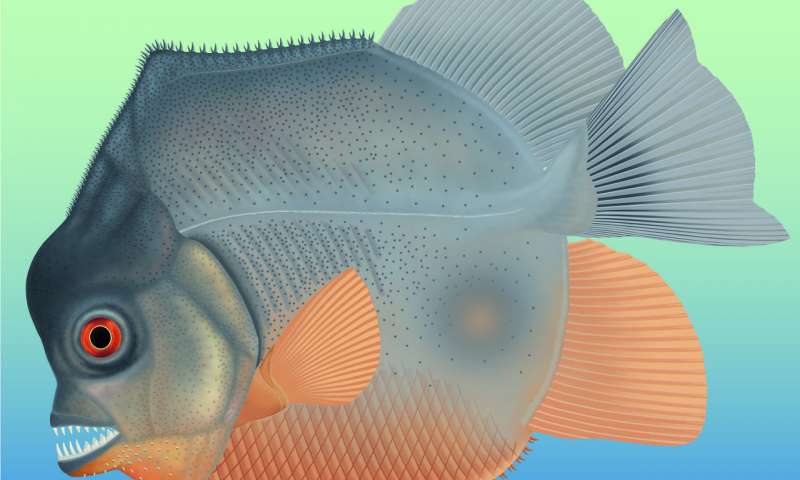 The similarities between the piranha and this ancient fish are so great that the new species has been named Piranhamesodon pinnatomus, a combination of “piranha” and “fin-cutter”.

Apart from their age, another important difference between the two is that the piranha is found only in freshwater, while the Jurassic fish was a creature of the salt.

“The new finding represents the earliest record of a bony fish that bit bits off other fishes, and what’s more it was doing it in the sea,” Bellwood says.

“So when dinosaurs were walking the earth and small dinosaurs were trying to fly with the pterosaurs, fish were swimming around their feet tearing the fins or flesh off each other.”

This study has been published in Current Biology.

These spiders look like they’re in REM sleep… which could mean they’re dreaming
Mysterious jets of upside-down lightning are real, and we just got our best look yet
Stunning New James Webb Image Reveals The Cartwheel Galaxy in Vivid Detail
The Universe could ‘bounce’ for eternity. But it still had to start somewhere
Minor Google meltdown exposes the world’s utter reliance on a single tech company