Nature is so weird. You can have worms living in the deep sea that are completely butt-free… while in reef-dwelling segmented worms whose bodies branch like a tree from its head, each branch ends in a separate butt.

This species is called Ramisyllis multicaudata, and it’s possibly the strangest worm on the planet. It was first discovered in 2006, and formally described in 2012. Now, for the first time, scientists have conducted a detailed study of its anatomy, finally revealing more about this enigmatic creature – and raising even more questions about how it lives its bizarre life.

“Our research solves some of the puzzles that these curious animals have posed ever since the first branched annelid was discovered at the end of the 19th century,” said evolutionary biologist Maite Aguado of the University of Göttingen in Germany.

“However, there is still a long way to go to fully understand how these fascinating animals live in the wild.”

R. multicaudata seems to be the very embodiment of introversion. It lives symbiotically in sea sponges to shallow depths of 20 meters (66 feet) in the waters off the north coast of Australia, its head buried deep in its living home.

As it grows, its bristled branching body, with diameters around 1 millimeter, extends along channels in the sponge. Only the very ends of those branches – the worm’s many posteriors – stick out, giving the sponge a slightly patterned appearance.

It’s a curious existence, and one that has puzzled biologists. The worm is very fragile, and breaks apart very easily, making it extraordinarily difficult to dissect and study.

Nevertheless, after painstaking work using a combination of techniques including histology, electronic optical microscopy, immunohistochemistry, confocal laser microscopy, and X-ray computed microtomography, an international team of biologists has managed to study the ins and outs of R. multicaudata‘s anatomy.

By analyzing the worm enveloped within the host sponge, they managed to show that the entire, complex, branching worm is huge, extensively filling the sponge’s canals and cavities. They also obtained three-dimensional images of the worms and their internal anatomy, as well as the labyrinthine sponges they call home.

For the first time, they were able to confirm that when the worm’s body divides and branches, so too do its internal organs. Digestive tracts split, and the worm’s guts run through the new branches as well as the old.

Fascinatingly, this peculiarity requires an anatomical structure never before seen in any other animal – what the researchers have called muscle bridges. These form wherever the worm bifurcates, crossing between the split organs.

The muscle bridges are also evidence that the worm splits when it’s mature, not as a juvenile, and can also be used to track which branch was the original and which one split, which is useful for understanding the animal’s growth. 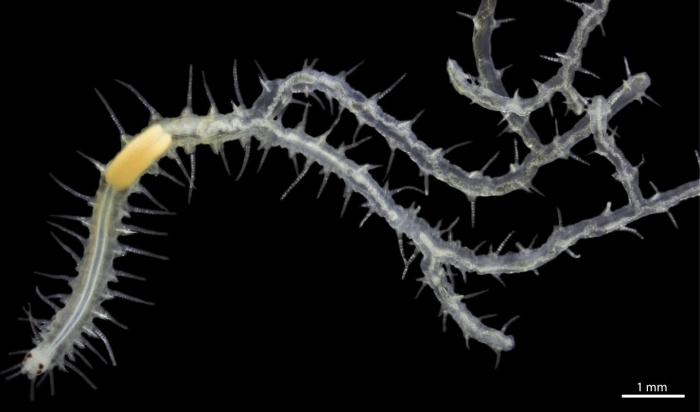 When the worm wants to reproduce, it uses its branches to do so. A branch tip will form with gametes inside, called a stolon; the stolon will detach from the parent worm to swarm and reproduce with other stolons before dying, while the parent lives on.

In their study, the researchers were able to confirm that these stolons develop brains and eyes while still attached to the parent worm. Then, when the stolon breaks free, it is completely autonomous, ready to swim and breed.

However, there’s one mystery we still don’t have an answer for: With just one head, buried deep in a sponge, how and what does R. multicaudata eat?

“This study has concluded that the intestine of these animals could be functional, yet no trace of food has ever been seen inside them and so it is still a mystery how they can feed their huge branched bodies,” Aguado said.

“Other questions raised in this study are how blood circulation and nerve impulses are affected by the branches of the body.”

All those butts, and the worm’s not even using them… at least, not in a way that we can currently recognize.

Now that the groundwork has been laid, perhaps future research will have an easier time understanding how R. multicaudata lives – and how the heck it evolved to become the weird and wonderful way it is.

The research has been published in the Journal of Morphology.

This shaggy deep-sea creature looks like an undulating wad of orange spaghetti
Birds possess an amazingly dinosaur-like feature before they hatch from their eggs
Extinct pathogens ushered the fall of ancient civilizations, scientists say
Pieces of charred wreckage scattered across Southeast Asia likely from Chinese rocket
Having Wealthy Friends in Childhood Can Boost Your Income in The Future