Scientists in Australia have solved a bizarre mystery from earlier in the month, when a mother in Queensland found that orange slices she’d cut up for her two-year-old son had puzzlingly transformed overnight.

Hours after being segmented, these orange chunks were no longer orange, but had morphed into a vibrant purple. The fruit reportedly had tasted perfectly normal, but nobody had an explanation for the surreal colour change.

“For the rest of the day and overnight they continued to develop this really amazing indigo colour,” the mother, Neti Moffitt of Keperra, Brisbane told The Sydney Morning Herald at the time.

“Everyone is so utterly intrigued and desperate to find the answer.”

Now, it looks like the mystery has been solved. 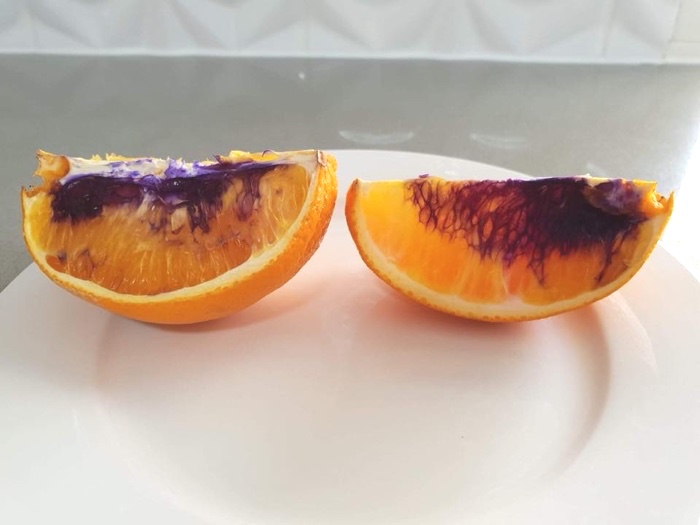 Scientists with Queensland Health’s Forensic and Scientific Services (FSS) lab collected the leftover orange/purple pieces back in early September, along with the knife used to cut the fruit (and the steel sharpener for the knife).

According to a report by the Australian Broadcasting Corporation (ABC), who obtained the results of the lab tests, the colour change was due to a chemical reaction between naturally occurring compounds in the orange and particles of iron found on the knife – which had only recently been sharpened before slicing the fruit.

“The results of analysis have confirmed the discolouration was caused by the reaction of anthocyanins, a pigment that is naturally present in oranges, and traces of iron and/or other metals from a freshly sharpened knife,” the report states.

“These pigments are not known to represent any risk to human health.”

FSS chief chemist Stewart Carswell told the ABC the researchers extracted the purple pigment from the affected oranges and ran it through a number of tests, including chemical spot tests and various spectometry analyses.

While the results haven’t been published in a peer-reviewed journal just yet, here’s what we know so far, thanks to the ABC.

The tests revealed that the regions of purple discolouration in the orange contained elevated concentrations of iron and other metallic elements compared to regions with a regular, orange colour.

Moffitt told the ABC her husband had sharpened the knife a night or two before it was used to slice the orange, and it would have been washed beforehand also.

In any case, it looks like loose and extremely tiny particles of iron and other metals produced by the sharpening lingered on the surface of the blade, and when they came into contact with the anthocyanin antioxidants in the fruit, it produced the purple transition.

Anthocyanins are present in lots of deep-coloured red, blue, and purple foods – including berries, currants, red cabbage, and cherries. One of the things that determines their exact colour is the level of pH, but temperature also plays a part.

According to the report, anthocyanins occur more in blood oranges than in regular oranges, but the amount of the pigment can increase in cold storage – which might have played a part in Moffitt’s experience.

When the FSS researchers treated unaffected orange with iron, it produced the same colour seen in the provided samples, suggesting this case – and possibly a similar incident also observed in Queensland three years ago – were due to interaction with the metal. 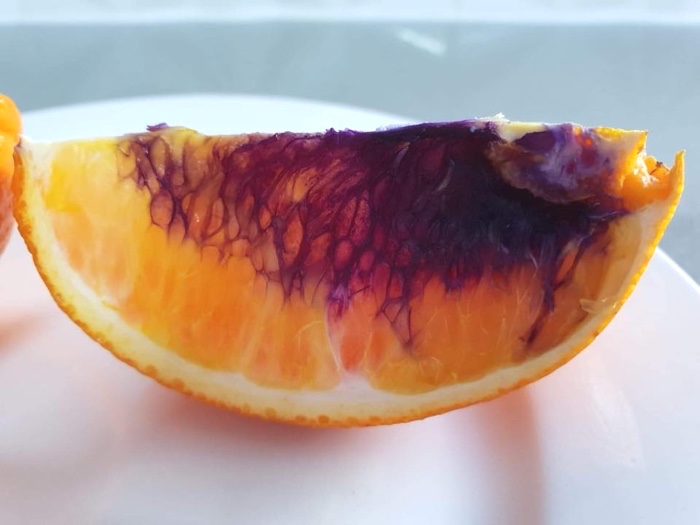 While it doesn’t look like there are any health risks associated with these purple oranges, the phenomenon does serve as a remarkable reminder of how all the food we eat is made up of thousands of chemicals, which in turn are exposed to thousands more present in the environment around us.

In a sense, every afternoon snack harbours multitudes of chemical reactions that could hypothetically take place, but it’s only when the products of that reaction are sufficiently dramatic (read: bright purple oranges) that we sit up and take notice.

“It just goes to show just the slightest change of environment or whatever that is can have such an amazing effect,” Moffitt told the ABC.

“It was a matter of having all of our ducks lined up in a row for this to occur.”