Of all the prehistoric creatures to find trapped in amber, we never would have expected a snail.

But that’s exactly what palaeontologists have found – so perfectly preserved that its delicate shell is intact, and prehistoric soft snail tissues have been observed for the first time. A second, less well-preserved snail shell is also in the same chunk of amber.

Encased in 99 million-year-old amber from Myanmar, the snails hail from the Cretaceous, when some of the world’s most beloved dinosaurs, such as T. rex, velociraptor and triceratops trod the Earth.

Their morphology suggests that they are ancestors of the Cyclophoridae family of terrestrial snails. This makes them not just the oldest snails ever found in amber – it would also put them among the oldest cyclophoroideans found in Asia.

Snails, as you probably know, are extraordinarily fragile. Their bodies are soft and squishy, and their exoskeletons – also known as their shells – are brittle.

Some have been preserved on the fossil record, but snails preserved in amber are exceptionally rare.

This piece, purchased from a private fossil collector in 2016, is 70 million years older than any other snail soft tissue that has been identified to date. And it’s quite exceptional – including the head, foot and eye stalk of a juvenile.

“Ancient tree resin has exceptional preservation potential, capturing the finest of details of fossil organisms millions of years old in perfect 3-D space – so much so that they appear as though they just became trapped in the resin yesterday,” palaeontologist Jeffrey Stilwell of Monash University in Australia told John Pickrell at National Geographic.

Because the snail is so young, it’s difficult to positively identify, although it has several morphological features that are comparable to those seen on both fossil and living Cyclophoridae species, such as an operculum, a sort of “lid” the snail uses to seal its shell.

What’s perhaps even more interesting is that the snail was likely alive when it was encased in the amber, its body stretched and distorted, with an air bubble around its head.

“The soft parts of the snail are very stretched, and this could represent a final attempt at escape to no avail,” the researchers wrote in their paper.

“Given that the snail was seemingly entombed in tree resin while alive, this could account for the pronounced distortion in the preserved soft tissues.” 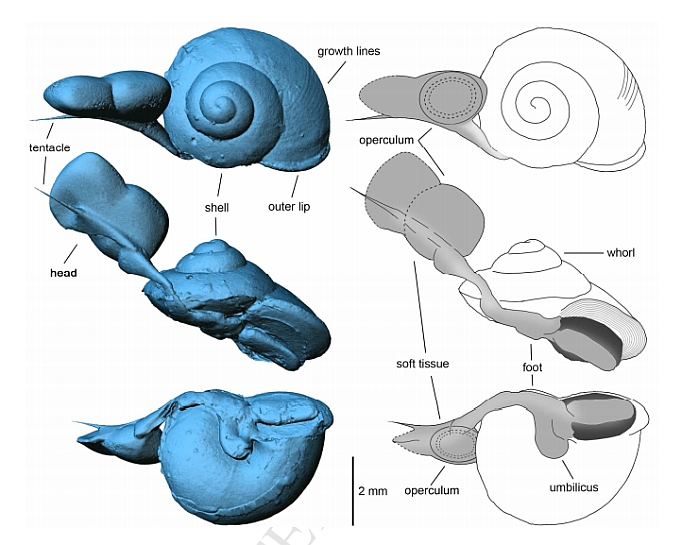 The likely sequence of events, they hypothesise, was that the tiny snail was crawling along with its eye stalked outstretched when the resin started to engulf it. It stretched out in an attempt to escape, and this is when the resin flowed around its body.

Once trapped, the snail exuded air, possibly from a lung inside its shell, which bubbled outwards and obscured its head.

Although this doesn’t help identification, the fact of the snail’s existence is an amazing addition to the incredible finds made in recent years in Myanmar amber from around 99 million years ago, revealing an unprecedented level of detail about the region during the Cretaceous.

Previous discoveries include a dinosaur tail covered in delicate feathers, the first ever found; a really peculiar arachnid with a long, whip-like tail; a tiny prehistoric “opposite bird” of a species that died off with the dinosaurs; the world’s oldest known chameleon; a “vampire ant” with a metal spike on its head; prehistoric frogs; and a baby snake.

The snail in amber is now in the collection of the Dexu Institute of Palaeontology in Chaozhou, China.

And the paper describing it has been published in the journal Cretaceous Research.

Every baby sea turtle in Florida seems to be female. We warned you, scientists say
Giant Viruses Called ‘Jumbo Phages’ Could Help Us Fight Antibiotic Resistance
The human mind is not meant to be awake after midnight, scientists warn
Astronomers say they’ve found the most distant galaxy ever observed
Extinct pathogens ushered the fall of ancient civilizations, scientists say