Called the Leidenfrost effect, when you sprinkle water onto a hot surface, the drops float above the surface on a layer of vapor. They stick around for a moment or two longer than they would at a lower (but still above boiling) temperature, skittering across the pan before evaporating away.

This happens to all different types of liquids, as long as the temperatures are much hotter than each particular liquid’s boiling point. But researchers have just discovered something even more interesting – that this effect can occur even between two droplets of different liquids, causing them to ‘bounce’ off each other.

The team of researchers, led by first author, University of Puebla physicist Felipe Pacheco-Vázquez, looked at liquids such as water, ethanol, methanol, chloroform, and formamide, and analysed whether two drops of each combination of liquids would ‘coalesce’ straight away into a single droplet, or would ‘consecutive rebound’ (bounce off each other a few times).

They did this by using a small metal plate with a slight inward slope and heating it to 250 degrees, which was well above any of the liquids’ boiling points (which ranged from acetone’s 50 °C to formamide’s 146 °C at the lab’s altitude).

A big clear drop of one liquid was then added with a small blue dyed drop and they watched what happened. Some – when both drops were the same type of liquid or liquids with similar boiling points – just merged straight away, once they slid into each other at the lowest point of the plate.

Others took their time before merging. They looked a lot like the small droplet bouncing on the big one. You can see this between ethanol (the small droplet) and water (the big droplet) below in the video:

“The direct coalescence lasts some milliseconds, and it was observed mainly with drops of the same liquid (e.g. water-water) or liquids with similar properties (e.g. ethanol-isopropanol),” the team writes in a new paper.

“In contrast, drops with large differences in properties (e.g. water-ethanol or water-acetonitrile) remain bouncing during several seconds, or even minutes, while they evaporate until reaching a critical size to finally coalesce.”

Eventually after the liquid that evaporates faster shrinks to a particular size, the two drops combine and then ‘pop’ – you’ve got one slightly bigger mixture of liquids skating around instead of two.

You can see from the table below whether any of the two liquids coalesced (c), rebounded (r), did some combination of both (c/r), or in special cases remained as separated phases because they can’t be mixed (s). 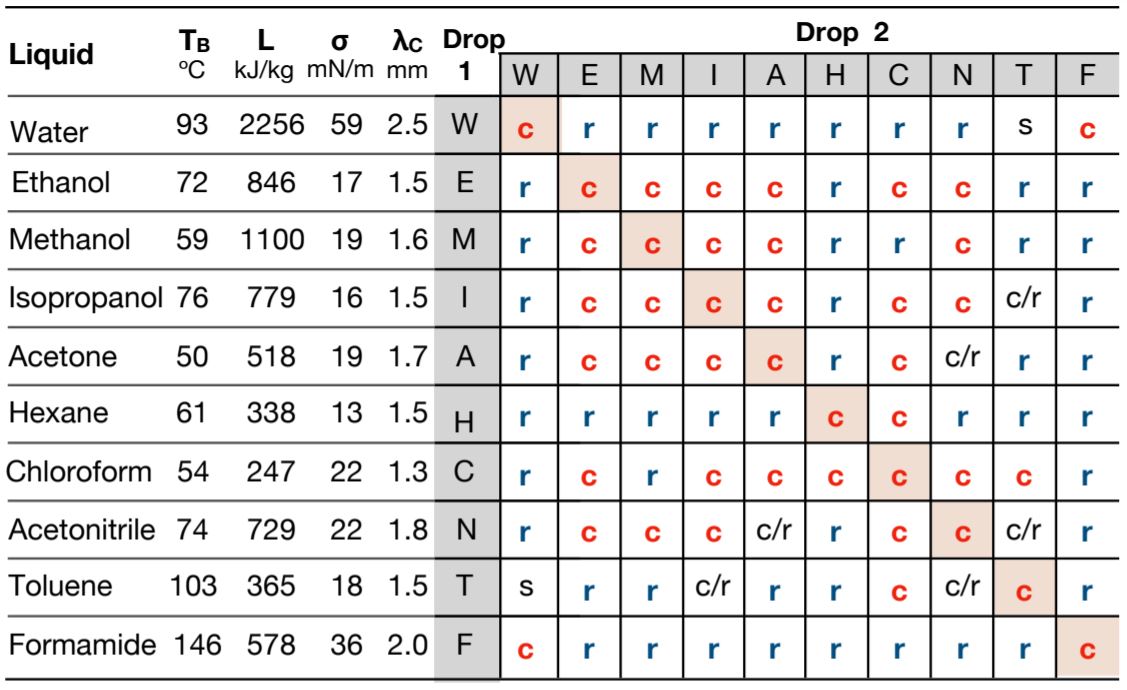 The team suggest that this bouncing is actually a ‘triple Leidenfrost effect’, where the drops don’t just end up with an insulating vapour layer from the surface of the hot plate, but also between the two droplets.

“The bouncing dynamics is produced because the drops are not only in Leidenfrost state with the substrate, they also experience Leidenfrost effect between them at the moment of collision,” the team writes.

“This happens due to their different boiling temperatures, and therefore, the hotter drop works as a hot surface for the drop with lower boiling point, producing three contact zones of Leidenfrost state simultaneously. We called this scenario the triple Leidenfrost effect.”

The research has been published in Physical Review Letters.

Ancient Fish Fossil Suggests That Teeth Didn’t Evolve From Inside The Mouth
Scientists Just Genetically Edited a Million Years of Evolution Into Mouse DNA
An Animal’s Lifespan Hints at How Well It Copes With Climate Change, Says Study
Gravity Has Stayed Constant For The Entire Age of The Universe, Study Finds
Using Jumbo-Sized Atoms And Tiny Lasers, Researchers Have Created ‘Atomic Television’