When the Nobel Prize-winning US physicist Robert Hofstadter and his team fired highly energetic electrons at a small vial of hydrogen at the Stanford Linear Accelerator Center in 1956, they opened the door to a new era of physics.

Until then, it was thought that protons and neutrons, which make up an atom’s nucleus, were the most fundamental particles in nature.

They were considered to be ‘dots’ in space, lacking physical dimensions. Now it suddenly became clear that these particles were not fundamental at all, and had a size and complex internal structure as well.

What Hofstadter and his team saw was a small deviation in how electrons ‘scattered’, or bounced, when hitting the hydrogen. This suggested there was more to a nucleus than the dot-like protons and neutrons they had imagined.

The experiments that followed around the world at accelerators – machines that propel particles to very high energies – heralded a paradigm shift in our understanding of matter.

Yet there is a lot we still don’t know about the atomic nucleus – as well as the ‘strong force’, one of four fundamental forces of nature, that holds it together.

Now a brand-new accelerator, the Electron-Ion Collider, to be built within the decade at the Brookhaven National Laboratory in Long Island, US, with the help of 1,300 scientists from around the world, could help take our understanding of the nucleus to a new level. 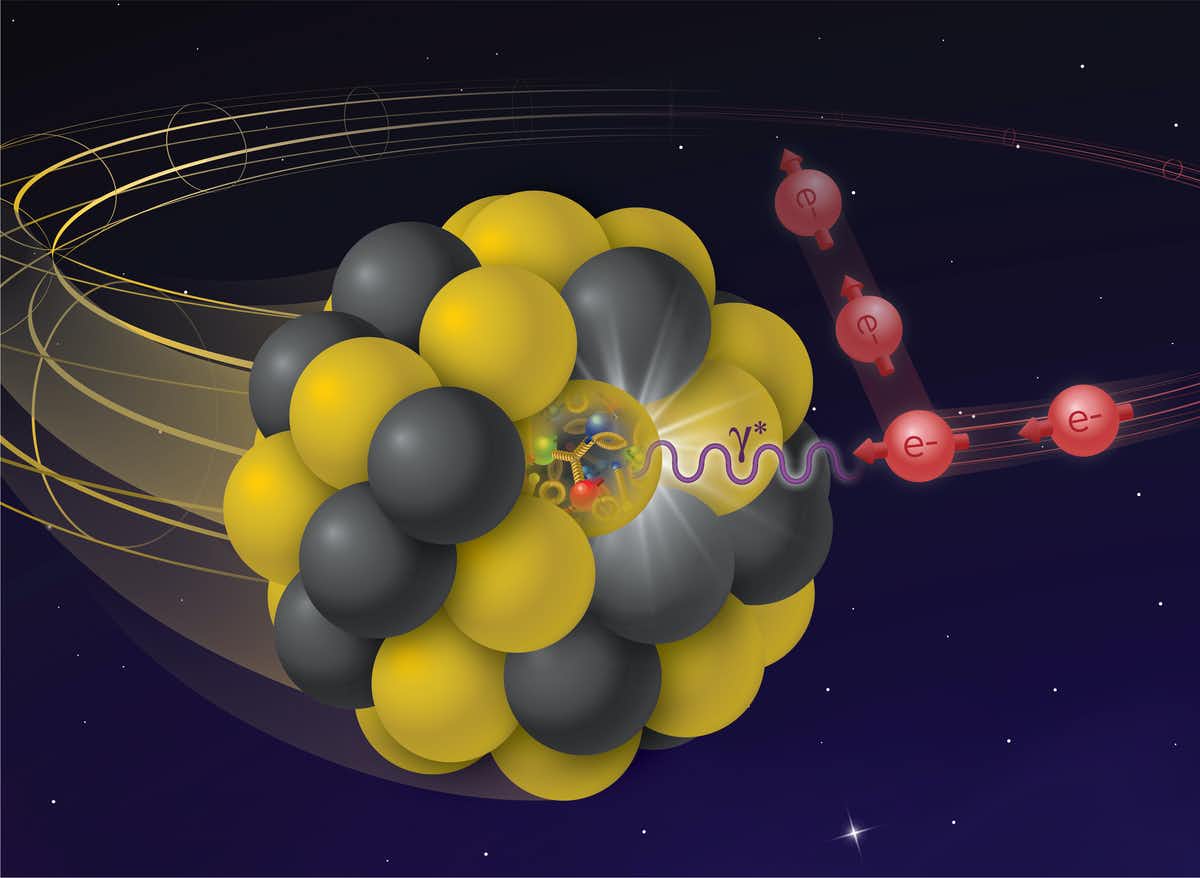 Above: How an electron colliding with a charged atom can reveal its nuclear structure.

After the revelations of the 1950s, it soon became clear that particles called quarks and gluons are the fundamental building blocks of matter. They are the constituents of hadrons, which is the collective name for protons and other particles.

Sometimes people imagine that these kinds of particles fit together like Lego, with quarks in a certain configuration making up protons, and then protons and neutrons coupling up to create a nucleus, and the nucleus attracting electrons to build an atom. But quarks and gluons are anything but static building blocks.

A theory called quantum chromodynamics describes how the strong force works between quarks, mediated by gluons, which are force carriers. Yet it cannot help us to analytically calculate the proton’s properties. This isn’t some fault of our theorists or computers – the equations themselves are simply not solvable.

This is why the experimental study of the proton and other hadrons is so crucial: to understand the proton and the force that binds it, one must study it from every angle. For this, the accelerator is our most powerful tool.

Yet when you look at the proton with a collider (a type of accelerator which uses two beams), what we see depends on how deep – and with what – we look: sometimes it appears as three constituent quarks, at other times as an ocean of gluons, or a teeming sea of pairs of quarks and their antiparticles (antiparticles are near identical to particles, but have the opposite charge or other quantum properties).

So while our understanding of matter at this tiniest of scales has made great progress in the past 60 years, many mysteries remain which the tools of today cannot fully address. What is the nature of the confinement of quarks within a hadron? How does the mass of the proton arise from the almost massless quarks, 1,000 times lighter?

To answer such questions, we need a microscope that can image the structure of the proton and nucleus across the widest range of magnifications in exquisite detail, and build 3D images of their structure and dynamics. That’s exactly what the new collider will do.

The Electron-Ion Collider (EIC) will use a very intense beam of electrons as its probe, with which it will be possible to slice the proton or nucleus open and look at the structure inside it.

It will do that by colliding a beam of electrons with a beam of protons or ions (charged atoms) and look at how the electrons scatter. The ion beam is the first of its kind in the world.

Effects which are barely perceptible, such as scattering processes which are so rare you only observe them once in a billion collisions, will become visible.

By studying these processes, myself and other scientists will be able to reveal the structure of protons and neutrons, how it is modified when they are bound by the strong force, and how new hadrons are created.

We could also uncover what sort of matter is made up of pure gluons – something which has never been seen. The collider will be tunable to a wide range of energies: this is like turning the magnification dial on a microscope, the higher the energy, the deeper inside the proton or nucleus one can look and the finer the features one can resolve.

Newly formed collaborations of scientists across the world, which are part of the EIC team, are also designing detectors, which will be placed at two different collision points in the collider.

Aspects of this effort are led by UK teams, which have just been awarded a grant to lead the design of three key components of the detectors and develop the technologies needed to realize them: sensors for precision tracking of charged particles, sensors for the detection of electrons scattered extremely closely to the beam line and detectors to measure the polarization (direction of spin) of the particles scattered in the collisions.

While it may take another 10 years before the collider is fully designed and built, it is likely to be well worth the effort.

Understanding the structure of the proton and, through it, the fundamental force that gives rise to over 99 percent of the visible mass in the Universe, is one of the greatest challenges in physics today.

A Foot of Sea Level Rise From Greenland’s Melting Ice May Already Be Locked in
Surprise Discovery Shows Some Crops Grow Better in Cities Than on Farms
A Simple Thing Gives Us Away When Lie About How We Judge Other People
Surreal NASA Videos Reveal What a Solar Eclipse Looks Like on Mars
Gravity Has Stayed Constant For The Entire Age of The Universe, Study Finds