To make some of the most precise measurements we can of the world around us, scientists tend to go small – right down to the atomic scale, using a technique called atom interferometry.

Now, for the first time, scientists have performed this kind of measurement in space, using a sounding rocket specially designed to carry science payloads into low-Earth space.

It’s a significant step towards being able to perform matter-wave interferometry in space, for science applications that range from fundamental physics to navigation.

“We have established the technological basis for atom interferometry on board of a sounding rocket and demonstrated that such experiments are not only possible on Earth, but also in space,” said physicist Patrick Windpassinger of Johannes Gutenberg University Mainz in Germany.

Interferometry is a relatively simple in concept. You take two identical waves, separate them, recombine them, and use the small difference between – called a phase shift – to measure the force that caused that distance.

This is called an interference pattern. A famous example is LIGO’s light interferometer that measures gravitational waves: A beam of light is split down two tunnels miles long, bounced off mirrors and recombined. The resulting interference pattern can be used to detect the gravitational waves caused by colliding black holes millions of light-years away.

Atom interferometry, harnessing the wave-like behavior of atoms, is a little trickier to achieve, but has the advantage of a much smaller apparatus. It would be very useful in space, where it could be used to measure things like gravity to a high level of precision; so, a team of German researchers has been working for years to try to make it happen.

The first step is to create a state of matter called a Bose-Einstein condensate. These are formed from atoms cooled to just a fraction above absolute zero (but not reaching absolute zero, at which point atoms stop moving). This causes them to sink to their lowest-energy state, moving extremely slowly, and overlapping in quantum superposition – producing a high density cloud of atoms that acts like one ‘super atom’ or matter wave.

This is an ideal starting point for interferometry, because the atoms are all behaving identically, and the team achieved the creation of a Bose-Einstein condensate in space for the first time using their sounding rocket in 2017, with a gas of rubidium atoms.

“For us, this ultracold ensemble represented a very promising starting point for atom interferometry,” Windpassinger said.

For the next stage of their research, they had to separate and recombine the superimposed atoms. Once again, the researchers created their rubidium Bose-Einstein condensate, but this time they used lasers to irradiate the gas, causing the atoms to separate, then come back together in superposition. 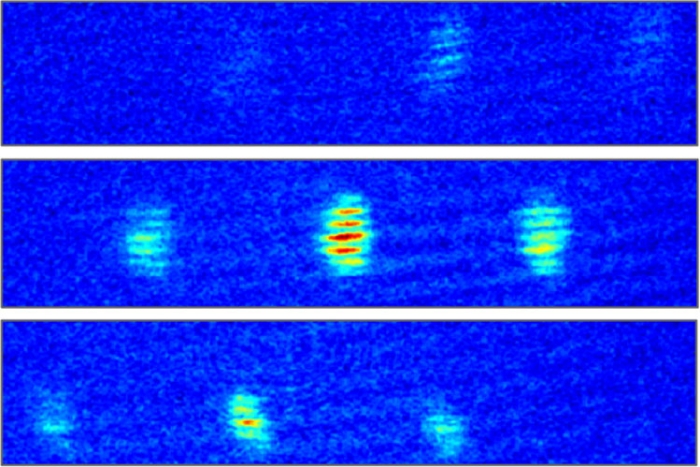 The resulting interference pattern showed a clear influence from the microgravity environment of the sounding rocket, suggesting that with a bit of refinement, the technique could be used to measure this environment to high precision.

The next step of the research, planned for 2022 and 2023, is to try the test again using separate Bose-Einstein condensates of rubidium and potassium to observe their acceleration under free fall.

Since rubidium and potassium atoms have different masses, this experiment will, the researchers said, an interesting test of Einstein’s equivalence principle, which states that gravity accelerates all objects equally, irrespective of their own mass.

The principle has been investigated in space before, as can be observed in the famous feather and hammer experiment conducted by Apollo 15 Commander David Scott on the Moon. The equivalence principle is one of the cornerstones of general relativity, and relativity tends to break down in the quantum realm, so the planned experiments are set to be very interesting indeed.

And it’s only going to get more interesting in the future. Sounding rockets go up and come down in suborbital flights, but there are plans to perform even more Bose-Einstein condensate experiments in Earth orbit.

“Undertaking this kind of experiment would be a future objective on satellites or the International Space Station ISS, possibly within BECCAL, the Bose Einstein Condensate and Cold Atom Laboratory, which is currently in the planning phase,” said physicist André Wenzlawski of Johannes Gutenberg University Mainz in Germany.

“In this case, the achievable accuracy would not be constrained by the limited free-fall time aboard a rocket.”

In just a few short years, we could be using atom interferometry for applications such as quantum tests of general relativity, detection of gravitational waves, and even the search for dark matter and dark energy.

We can’t wait to see what happens next.

The team’s research has been published in Nature Communications.

Physicists shattered the record for coldest temperature ever achieved in a lab
Earth tipped on its side 84 million years ago, new evidence suggests
Plankton is undergoing a global migration, with dire consequences for the food web
Physicists may have discovered ‘new force of nature’ in LHC experiment
This 12,000-year-old fossil jaw could be the oldest known dog in the Americas