Wherever you have fluid, there you can also find vortex rings.

Now, scientists have found vortex rings somewhere fascinating – inside a tiny pillar made of a magnetic material, the gadolinium-cobalt intermetallic compound GdCo2.

If you’ve seen smoke rings, or bubble rings under water, you’ve seen vortex rings: doughnut-shaped vortices that form when fluid flows back on itself after being forced through a hole.

The new discovery is the first time vortex rings have been identified in a magnetic material, confirming a decades-old prediction – and it could help scientists identify even more complex magnetic structures that could be harnessed to develop new technologies.

Magnetic ring vortices were predicted over 20 years ago in 1998, when physicist Nigel Cooper of the University of Cambridge demonstrated magnetic vortices are analogous to the vortex rings seen in fluid dynamics. Actually finding them, however, was a lot harder to do.

In fact, it wasn’t until 2017 when the technology was developed to image magnetisation within a material beyond the surface layer. Researchers from the Paul Scherrer Institute and ETH Zurich developed an X-ray nanotomography technique to image the three-dimensional magnetisation structure inside a GdCo2 bulk magnet.

During those experiments, the researchers, led by physicist Claire Donnelly of ETH Zurich, identified vortices like those that appear when you pull the plug out of a sink full of water. These vortices were paired with their topological counterparts, antivortices.

In those same tiny GdCo2 pillars, the researchers also found closed magnetic loops, present in vortex-antivortex pairs as well. It was only after computationally analysing these structures in the context of magnetic vorticity that the team figured out these were doughnut-shaped ring vortices, intersected by magnetisation singularities – a point where magnetisation vanishes – that reflect the polarisation reversal of the vortex and the antivortex. 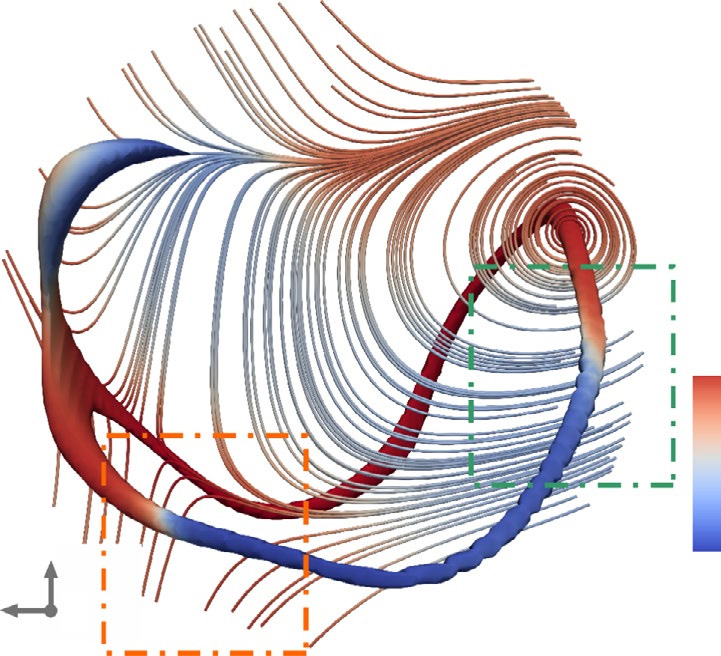 Above: A vortex-antivortex pair. The orange and green boxes indicate the regions where polarisation reverses.

But, surprisingly, they don’t behave exactly as predicted. Fluid ring vortices are always in motion and don’t last very long, so it was expected that magnetic ring vortices would behave in the same way, rolling through the magnetic material before dissipating.

Instead, the vortices sat still in a static configuration, only disappearing after the GdCo2 was annealed – heated and exposed to a strong magnetic field, a process used to reorient magnetisation.

“One of the main puzzles was why these structures are so unexpectedly stable – like smoke rings, they are only supposed to exist as moving objects,” Donnelly, now at Cambridge University, said.

“Through a combination of analytical calculations and considerations of the data, we determined the root of their stability to be the magnetostatic interaction.”

In other words, the vortices interact with the magnetisation structures around them, which pin the rings in place, resulting in stabilisation. Studying how they form and remain stable could help physicists to learn how to control magnetic vortex rings, which in turn could help develop better technologies, such as data storage and neuromorphic engineering.

But the vortex rings could also help us better understand magnetisation. The role of singularities in magnetisation processes, for instance, is poorly understood. And the observation of vortex rings suggests that other complex structures could be studied in greater detail, such as solitons (magnetic waves).

“The calculation and visualisation of the magnetic vorticity and pre-images have proven essential tools in the characterisation of the observed three-dimensional structures,” the researchers wrote in their paper.

“The observation of stable magnetic vortex rings opens up possibilities for further studies of complex three-dimensional solitons in bulk magnets, enabling the development of applications based on three-dimensional magnetic structures.”

The research has been published in Nature Physics.