As our need for electronic gadgets and sensors grows, scientists are coming up with new ways to keep devices powered for longer on less energy.

The latest sensor to be invented in the lab can go for a whole year on a single burst of energy, aided by a physics phenomenon known as quantum tunnelling.

The tunnelling aspect means that with the help of a 50-million-electron jumpstart, this simple and inexpensive device (made up of just four capacitors and two transistors) can keep going for an extended period of time.

The quantum rules of physics, applying at the smallest atomic scales, means that electrons can behave both as particles and as waves, and the scientists were able to tap into that behaviour to precisely control electron flow from one side of a circuit to the other. 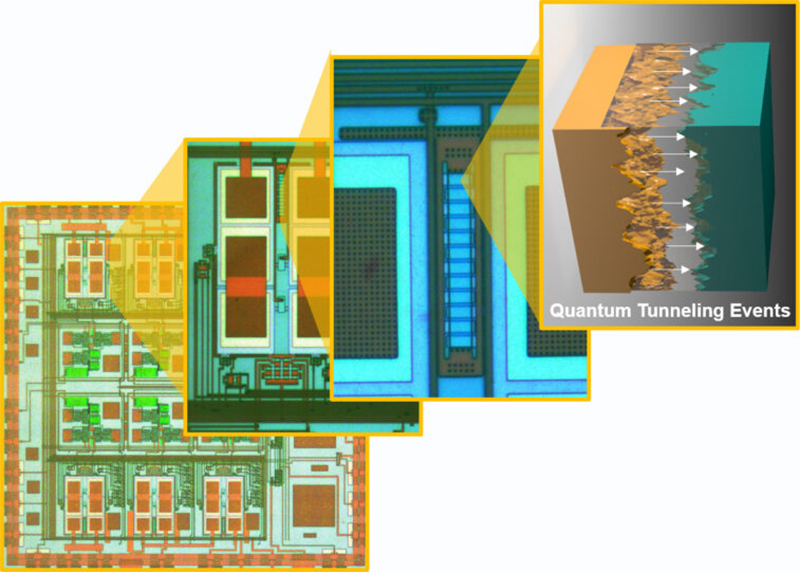 “If you want to get to the other side, you have to physically climb the hill,” says electrical engineer Shantanu Chakrabartty, from Washington University in St. Louis.

“Quantum tunneling is more like going through the hill.”

In order to generate current, devices need to be able to give electrons a hard enough push – something known as threshold energy, because that push needs to be over a certain threshold. When you’re trying to make devices that run on as little power as possible, hitting that threshold can prove tricky.

This is where the quantum mechanics part comes in: by taking certain approaches to shaping the ‘hill’ or barrier that needs to be overcome, it’s possible to control the flow of electrons in a variety of different ways.

In this case, the ‘hill’ is what’s called a Fowler-Nordheim tunnelling barrier, less than 100 atoms thick. By building the barrier in this way, the scientists were able to slow the flow of electrons right down while keeping the system (and the device) stable and switched on.

“Imagine there is an apple hanging from a tree,” says Chakrabartty. “You can shake the tree a little bit, but the apple doesn’t fall. You have to give it enough of a tug to shake the apple loose.”

“It’s the minimal amount of energy needed to move an electron over a barrier.”

Within the device are two dynamical systems, one with a transducer (energy converter). The team had to work backwards to shape their hill or barrier, measuring electron movement first and then refining the Fowler-Nordheim setup accordingly.

What the researchers ended up with was a device that uses the interplay between the two internal systems to sense and log data using no additional power. Something like this could be used for monitoring glucose in the blood, for example, or measuring temperature for vaccine transportation – batteries not necessary.

In this case, the transducer used was a piezoelectric accelerometer, which sensed and was powered by ambient motion, but the basic principles of the long-running, high-efficiency system can be applied to other types of energy harvesting too.

“Right now, the platform is generic,” says Chakrabartty. “It just depends on what you couple to the device. As long as you have a transducer that can generate an electrical signal, it can self-power our sensor-data-logger.”

New study may explain why not all birds are actually bird-brained
Explorers Just Discovered Australia’s Deepest Known Cave
Having Wealthy Friends in Childhood Can Boost Your Income in The Future
Humongous Sinkhole Appears in Chile, Leaving A Deep Void in the Desert
Pieces of charred wreckage scattered across Southeast Asia likely from Chinese rocket