As always, there was no danger, since the asteroid passed Earth at a minimum distance of 5.2 million km (3.23 million miles), over 15 times greater than the distance between Earth and the Moon, and its orbit is well-understood by scientists.

Because of this, flyby was the perfect opportunity for the International Asteroid Warning Network (IAWN) to conduct a cross-organizational observing campaign of the asteroid 1999 KW4 as it flew by Earth.

The European Southern Observatory (ESO) took part in this campaign and managed to capture some images of the object using the Very Large Telescope (VLT).

Discovered in 1999 by the Lincoln Near-Earth Asteroid Research(LINEAR) project, 1999 KW4 is classified as a potentially-hazardous Near Earth Object (NEO). 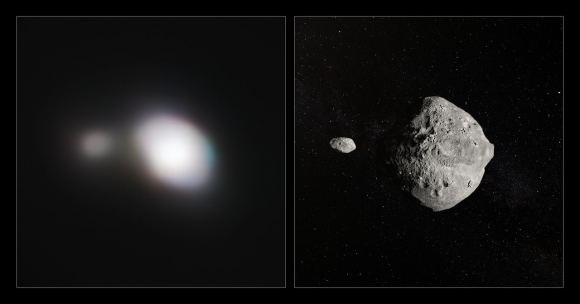 The SPHERE instrument obtained the sharpest images of the double asteroid as it flew by. (ESO)

For their part in the IAWN observation campaign, the ESO relied on the VLT’s Spectro-Polarimetric High-contrast Exoplanet REsearch instrument (SPHERE).

Due to its state-of-the-art adaptive optics (AO) system, SPHERE is one of the few instruments in the world that is capable of obtaining images sharp enough to distinguish the asteroid’s two components.

Given that SPHERE was designed to observe distant exoplanets, the AO system is essential since it corrects for turbulence from Earth’s atmosphere. It therefore allows the Earth-based VLT observatory to capture images that are as sharp as images taken by space telescopes.

It also comes equipped with coronagraphs, a technology that dims the glare of bright stars so the faint, reflective atmospheres of orbiting exoplanets can be seen.

Taking a break from its exoplanet-hunting efforts, the data gathered by SPHERE on 1999 KW4 has helped astronomers to characterize the double asteroid.

This included obtaining information about the composition of the asteroid and its moonlet to see if they formed from the same larger body, or the smaller object was captured somewhere along the way. As ESO astronomer Olivier Hainaut explained in a recent ESO press release:

“These data, combined with all those that are obtained on other telescopes through the IAWN campaign, will be essential for evaluating effective deflection strategies in the event that an asteroid was found to be on a collision course with Earth. In the worst possible case, this knowledge is also essential to predict how an asteroid could interact with the atmosphere and Earth’s surface, allowing us to mitigate damage in the event of a collision.”

Capturing the double asteroid with SPHERE was no easy task, as it happened to be hurling past Earth at more than 70,000 km/h (43,500 mph) at the time images of it were captured.

Nevertheless, SPHERE’s unique capabilities allowed the astronomers to obtain the sharpest images ever taken of 1999 KW4. As such, the team was particularly excited once they saw the AO-corrected images and felt like all their hard work was worth it.

Mathias Jones, a VLT astronomer who was involved in the observation campaign, elaborated on these difficulties:

“During the observations the atmospheric conditions were a bit unstable. In addition, the asteroid was relatively faint and moving very fast in the sky, making these observations particularly challenging, and causing the AO system to crash several times. It was great to see our hard work pay off despite the difficulties!”

This close flyby comes just a month before Asteroid Day, an official United Nations day of education and awareness about asteroids that will be celebrated on June 30th.

The ESO is one of many organizations from all around the world that will be taking part in the festivities and will be hosting asteroid-themed activities through the ESO Supernova Planetarium & Visitor Centre, in Garching, Germany.

While 1999 KW4 is not an impact threat, its recent flyby of Earth provided scientists with the opportunity to rehearse what they would do in the event of a hazardous NEO getting close to Earth.

They effectively demonstrated that the ESO’s front-line technology is crucial to our current methods of threat assessment. They could also prove critical if ever planetary defense efforts need to be mounted.

In addition, monitoring 1999 KW4 was good practice because of the striking resemblance it bears to another binary asteroid (Didymos) which could pose a threat to Earth in the distant future.

This asteroid and its companion (“Didymoon”) are the target of a future planetary defense experiment known as the Double Asteroid Research Test (DART).

After it launches (currently scheduled for July of 2021) this NASA spacecraft will impact Didymoon in an attempt to change its orbit around Didymos, all for the sake of testing the feasibility of deflecting asteroids.

The ESA’s Hera mission will rendezvous with the double asteroid by 2026 to survey the Didymos asteroids and gather information on Didymoon’s mass, surface properties, and the shape of the DART crater.

The success of these missions is dependent upon the collaborative relationship that exist between space agencies like NASA and the ESA.

In addition, the tracking of Near-Earth Objects is possible thanks to the collaboration of organizations like the ESO and ESA, who conducted their first successful tracking effort of a potentially-hazardous NEO in early 2014.

“We are delighted to be playing a role in keeping Earth safe from asteroids. As well as employing the sophisticated capabilities of the VLT, we are working with ESA to create prototypes for a large network to take asteroid detection, tracking and characterization to the next level.”

Until such time as giant laser arrays, space-launched missiles or orbital defense platforms become a reality, information is the primary means through which planetary defense takes place.

By remaining vigilant and keeping track of objects that periodically cross Earth’s orbit, we ensure that we will never be caught off-guard by a sudden and – heaven forbid! – massive impact.

Be sure to check out this video of asteroid 1999 KW4, courtesy of the ESO:

For The First Time, Scientists Have Named a Heat Wave. Here’s Why It’s a Big Deal
The Moon Stole Something From Deep Inside Earth Eons Ago, and Scientists Can Prove It
Scientists Have Found A New Way to Detect Alien Worlds Beyond Our Solar System
Scientists Say ‘Space Bubbles’ Could Shield Earth From The Sun, But Would It Work?
Plants Have Been Keeping a Secret From Us About How Thirsty They Actually Are