A dazzling new direct image of an exoplanet has just broadened our understanding of the diversity of planetary systems out there in the big, wide Universe.

This star system is the most massive binary for which an exoplanet has been identified. Until now, astronomers didn’t think a star as hot and massive as b Centauri could even host an exoplanet.

Combined, the two stars have a mass of up to 10 times the mass of the Sun. Previously, no exoplanet has been spotted orbiting a star more chunky than three solar masses, the researchers say. 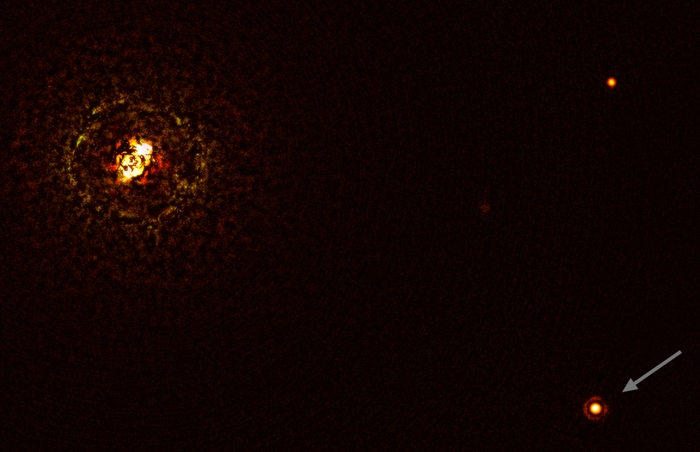 Above: Direct image of exoplanet b Centauri b, seen at the bottom right, in orbit around binary star b Centauri in the top left.

And b Centauri b is no slouch, either – it clocks in at an absolutely whopping 10.9 times the mass of Jupiter. It’s orbiting at a huge distance of 556 astronomical units, which is around 100 times Jupiter’s average orbital distance from the Sun.

“Finding a planet around b Centauri was very exciting since it completely changes the picture about massive stars as planet hosts,” says astronomer Markus Janson of Stockholm University in Sweden.

Photographing an exoplanet is a feat in and of itself. They are very far away, and only very dimly reflecting light, especially with something bright like a star shining up the neighborhood with their much more powerful radiation. For these reasons, exoplanets are usually impossible to see directly with our current technology.

b Centauri b is a rare exception. It is large, relatively close, and far enough from the stars it orbits so that their light doesn’t outshine it into invisibility.

The system is fascinating in other ways, too. It’s pretty young, just 15 million years old or so (the Sun is around 4.6 billion years old, for context).

The stars are orbiting each other so closely that, until recently, they were thought to be a single star. Young stars and massive stars are both quite hot; the main star in b Centauri is very hot indeed. It’s what is known as a B-type star, so hot and luminous that it appears blue.

Because these stars blast out such intense X-ray and ultraviolet radiation, it’s thought that exoplanets might have a hard time forming in their proximity. The discovery of b Centauri b, shows that it’s not impossible – but the world is nonetheless unlikely to be habitable.

“The planet in b Centauri is an alien world in an environment that is completely different from what we experience here on Earth and in our Solar System,” says astronomer Gayathri Viswanath of Stockholm University.

“It’s a harsh environment, dominated by extreme radiation, where everything is on a gigantic scale: the stars are bigger, the planet is bigger, the distances are bigger.”

Those distances, the researchers said, may be key to understanding how the exoplanet has managed to survive. That separation may have prevented the gas giant from being evaporated by the harsher radiation at closer proximities.

However, b Centauri b also presents challenges to our models of planetary formation. Stars form in molecular clouds from a knot of material that collapses under its own gravity and starts spinning.

This process results in a disk of gas and dust spooling around the star, feeding into it. Once the star has finished forming, the leftover material continues to swirl in a disk around it.

Over time, clumps of material will start to cling together, accumulating into larger and larger objects that, eventually, form planets. This is what’s known as the core accretion model – but b Centauri b is thought to be too far from its star for it to have formed there via this method.

Alternatively, exoplanets can form via gravitational instability, in which a clump of gas and dust in the disk directly collapses into a planet.

However it came into being, the exoplanet is an outlier that is helping redefine our understanding of planetary systems. It shows that exoplanets can form in locations wildly different and more extreme than what we might have assumed, given the thousands of previous exoplanet discoveries. Working out its origin and evolution will only teach us more.

“It will be an intriguing task to try to figure out how it might have formed, which is a mystery at the moment,” Janson says.

Why was the volcano explosion in Tonga so violent, and what to expect now?
Here’s How The Sound of Mosquitoes’ Mating Rituals Could Help Us Control Malaria
The Tonga volcanic eruption was so powerful it sent ripples out into space
Spectacular Lost Highways of Ancient Arabia Discovered By Archaeologists
These ancient ‘war donkeys’ were likely the 1st human-bred hybrid animals