The Hubble Space Telescope has been giving us amazing images of far flung regions of space since it was launched back in 1990.

But, even after all this time, it still finds ways to blow us away.

Like this patchwork of deep field images just released, showing off 265,000 galaxies and stretching back billions of years.

Feast on the image below:

Okay, okay … maybe it doesn’t look like much – but that’s because it is a HUGE stretch of sky. If you want to see it in all it’s full glory, check out this video below.

So now that you’re suitably impressed, this image – called the Hubble Legacy Field – has been described by the team as a ‘time corridor’ showing us galaxies as they were up to 13.3 billion years ago, all the way back to when our Universe was just 500 million years old.

The image was created by using 16 years of previous deep field images, including the Hubble Ultra Deep Field and the eXtreme Deep Field.

The portrait is a mosaic of nearly 7,500 exposures, and as this image below shows, covers nearly the width of the full moon. 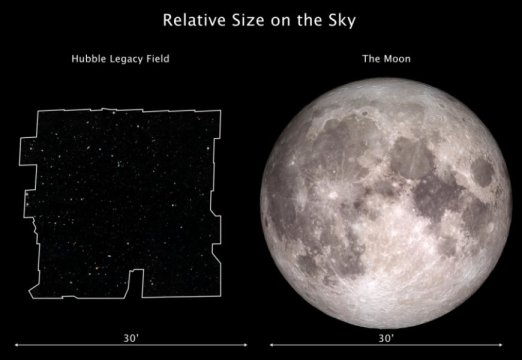 The resulting image has 30 times more galaxies than the Ultra Deep Field, and is the most comprehensive ‘history book’ of galaxies in one single image.

Back in 2016, NASA extended the operation schedule of Hubble until at least June 2021. At this stage though, we don’t know how much longer we’ve got with the space telescope, especially after a few recent system glitches.

Either way, this fantastic hunk of metal is worth it’s weight in galaxies.

Incredible ‘shrinking’ planets could be a missing link between worlds
Ancient ‘ghost footprints’ in Utah are the find of a lifetime, researchers say
The James Webb Space Telescope has its first image of the most distant known star
Having Wealthy Friends in Childhood Can Boost Your Income in The Future
Warm waters are rushing towards the world’s largest ice sheet, scientists warn