Changes in Mars‘ geography always attract significant scientific and even public attention.  A hope for signs of liquid water (and therefore life) is likely one of the primary driving forces behind this interest.

Now, scientists at the SETI Institute have a modified theory for where those RSLs might develop – a combination of water ice and salt just under the Martian surface.

According to the SETI team, led by Senior Research Scientist Janice Bishop, there is a two-step process going on that creates these RSLs.

First, underground water ice must mix with a combination of chlorine salts and sulfates to create a type of slurry that destabilizes the regolith in the area.

Then, the dry wind and dust storms of Mars take over, blowing the destabilized material into new patterns across the Martian surface. 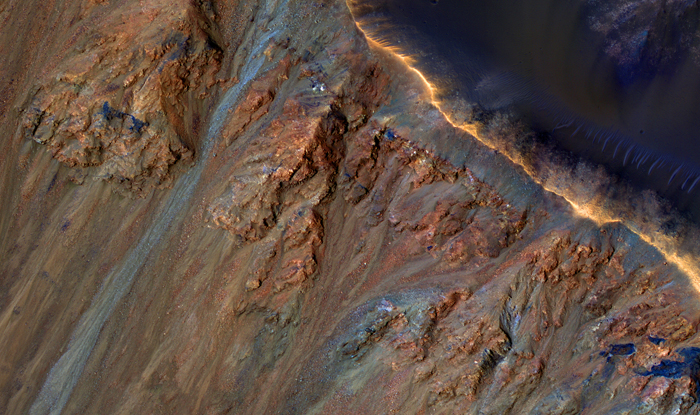 This is not the first time that researchers have suggested that chlorine salts might be involved in the creation of RSL.  As with much good science, this theory has now been fleshed out more through data gathered in both field and lab experiments.

Unfortunately, the field experiments were not able to be carried out on Mars itself (at least not yet).

However, there are several places on our home planet that are considered “Mars analogs”, including the Dead Sea in Israel, Salar de Pajonales in the Atacama Desert, and the Dry Valleys in Antarctica.

The SETI team collected data at some of those locations and noted that surface destabilization has already been observed when salt interacted with gypsum, a type of sulfate.

For this project, the team collected data in the Dry Valleys, where the soil geology and temperature are remarkably similar to those found on Mars by the Phoenix lander and MRO.

Fieldwork was then followed by lab work, as the team subjected Mars analog regolith to tests using colored indicators that would show how the regolith simulant would react when subjects to the same kind of chemical reactions that were taking place in Antarctica.

All this data collecting resulted in a geological model involving sulfates, chlorides, and water that can account for the appearance of the RSLs seen on Mars’ surface.

The model also has implications of the habitability of sub-surface Mars and how the presence of this slurry might affect any biosphere the red planet might have.

Until there are some further on-site tests this model will be hard to prove, but there are plenty of those planned for Mars in the near future.

Scientists Have Found A New Way to Detect Alien Worlds Beyond Our Solar System
Astronomers Charted The Sun’s Life, And This Is How The Story Ends
Scientists Just Broke The World Record For The Most Powerful Stable Magnetic Field
The Moon Stole Something From Deep Inside Earth Eons Ago, and Scientists Can Prove It
Researchers in South America Discover a New Species of Tiny but Tough Dinosaurs