We’ve seen plenty of awe-inspiring images of space captured by telescopes and spacecraft in the past: whether it’s a supernova blast wave, the textures of a planet, or pillars of interstellar gas and dust, there’s a virtually endless stream of fascinating pictures available for us to pore over.

Sometimes though there’s something more hidden in the patterns of stars and light. Take a look at the image below, for example, and see if it suggests anything to you. It’s an image captured by the NASA Spitzer Space Telescope, which was operational from 2003 to 2020.

Getting anything yet? We’ll give you a clue: Think about monsters… specifically monsters originating from Japanese films of the 1950s. You might have to squint a little and use your imagination before we tell you any more. 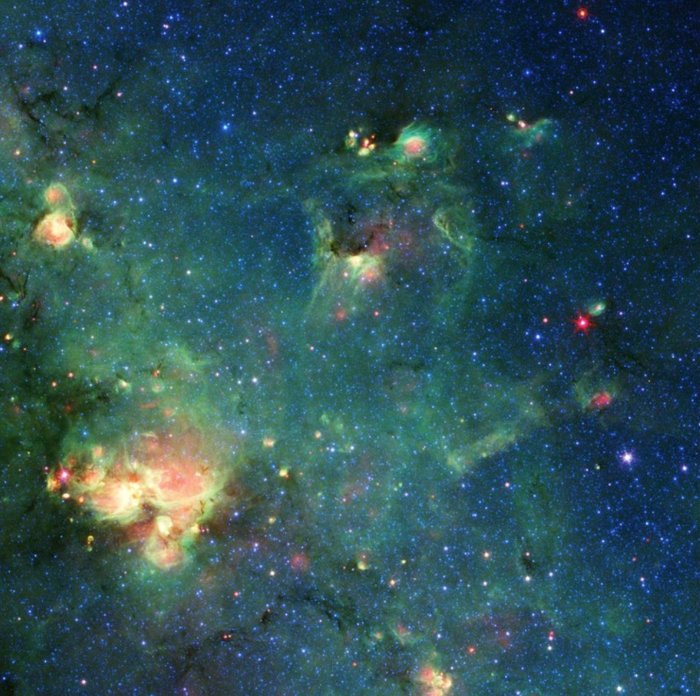 The nebula, hiding a certain someone. (NASA/JPL-Caltech)

In terms of specifics, the picture shows a nebula nursery of stars located in the Sagittarius constellation, along the plane of the Milky Way. The bright region in the lower left (which looks like it might be being held by a massive creature?) is a star-forming region known as W33, and is around 7,800 light-years away from Earth.

The picture was captured as part of Spitzer’s GLIMPSE Survey, which stands for Galactic Legacy Infrared Mid-Plane Survey Extraordinaire. Although Spitzer is now retired, the images it collected are still being analyzed.

One of those doing the analyzing is astronomer Robert Hurt, from the California Institute of Technology (Caltech), and he’s managed to spot something in the image. As you might have guessed by now, Hurt thinks there’s a definite hint of Godzilla in there.

“I wasn’t looking for monsters,” says Hurt. “I just happened to glance at a region of sky that I’ve browsed many times before, but I’d never zoomed in on. Sometimes if you just crop an area differently, it brings out something that you didn’t see before. It was the eyes and mouth that roared ‘Godzilla’ to me.” 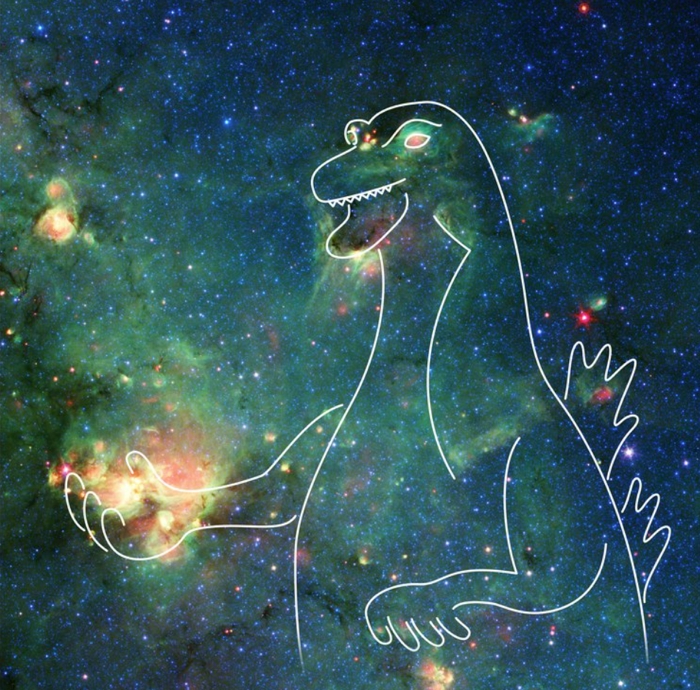 Pareidolia is the tendency to see something meaningful in a meaningless image, and it happens quite often – including in pictures of the cosmos: Take a look at the Spitzer images that resemble a jack-o’-lantern, a black widow spider, or the Starship Enterprise, for example.

Work continues to catalog and examine the data collected by Spitzer, and to raise awareness of its findings – and sometimes that means using an iconic sea monster to help tell a story.

“It’s one of the ways that we want people to connect with the incredible work that Spitzer did,” says Hurt.

“I look for compelling areas that can really tell a story. Sometimes it’s a story about how stars and planets form, and sometimes it’s about a giant monster rampaging through Tokyo.”

The Last Member of An Isolated Amazon Tribe Dies Alone
Surreal NASA Videos Reveal What a Solar Eclipse Looks Like on Mars
Ancient Colossus Unearthed in Portugal May Be Largest Dinosaur Ever Found in Europe
Gravity Has Stayed Constant For The Entire Age of The Universe, Study Finds
Extraordinary Trove of Ancient Gold Rings Discovered in Romanian Grave