It’s amazing what can be lurking out there in space, hidden by the limitations of our eyes, our technology, and our preconceptions.

Astronomers have only just found an absolutely colossal supernova remnant, an expanding cloud of dust and gas left over from a stellar explosion, taking up an area of the sky nearly 100 times that of the full Moon (from our perspective), at a maximum distance of 4,000 light-years from Earth.

A team of astronomers led by Werner Becker of the Max Planck Institute for Extraterrestrial Physics in Germany has named the remnant Hoinga, after the medieval name of Becker’s hometown.

How could we miss it? The reason is it is only visible in X-rays, and only to one of the most powerful X-ray telescopes we’ve built to date, the space-based eROSITA launched in 2019. Above: X-ray and radio composite of Hoinga.

“The eROSITA telescope, which is onboard the Russian-German SRG satellite, is 25 times more sensitive than its predecessor ROSAT, so we expected to discover new supernova remnants in coming years, but were pleasantly surprised to have one appear straight away,” said astronomer Natasha Hurley-Walker of the Curtin University node of the International Centre for Radio Astronomy Research in Australia.

“Adding to our excitement, Hoinga is the largest supernova remnant ever discovered via X-rays, in terms of apparent size: about 90 times larger than the full Moon.”

Supernovae have two main triggers. One is the death of a massive star. When they run out of material to fuse in their cores, the resulting drop in outward thermal pressure means the pressure is no longer sufficient to keep the star from collapsing under the inward pressure of gravity, and the whole thing goes kaboom, collapsing the core into a neutron star or black hole (or completely obliterating it).

The other trigger is a type Ia supernova, in which a white dwarf star – the collapsed core of a low-mass progenitor star – slurps so much material from a binary companion that it becomes unstable, and comes to the same end.

In both scenarios, an expanding shell of the star’s outer material is blasted into space, creating shock fronts where it slams into the interstellar medium. That’s the supernova remnant.

Most of the stars in the Milky Way are low mass – an estimated 90 percent of all stars are main sequence dwarfs that won’t end up in a supernova (stars that are currently “alive” fusing nuclei in their cores), and another 9 percent are dead white dwarfs.

So although there are an estimated 100 billion stars in the Milky Way, supernovae explosions are rare; astronomers estimate that one should go off every 30 to 50 years, leaving behind a glowing, energetic cloud that lasts for around 100,000 years. 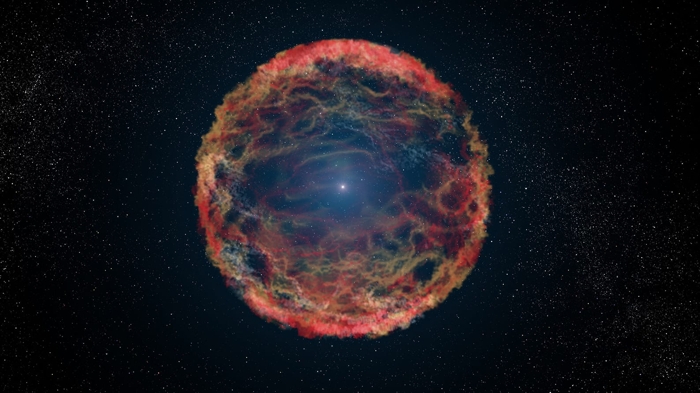 Artist’s impression of a supernova. (ESA/Hubble, CC BY 4.0)

At that rate, there should be around 1,200 supernova remnants currently detectable in the Milky Way; but we only know of 300 or so. Which means that either our calculations are off, or that we just haven’t been able to detect them, for whatever reason. This is where eROSITA comes in.

Most astronomical objects emit X-radiation, invisible to the naked eye. eROSITA, designed to conduct an all-sky survey, is much more sensitive than its predecessor, and has been revealing X-ray objects we have never seen before.

The team double-checked their findings against radio astronomy data, and found faint evidence of Hoinga dating back a decade. It even faintly appeared in ROSAT data taken 30 years ago.

“By sifting through archival radio data we discovered Hoinga had been sitting there waiting to be discovered in surveys up to ten years old, but because it was high above the plane of the Milky Way, it was missed,” Hurley-Walker explained.

“Supernova remnants are not typically expected to be found at high Galactic latitudes, so these areas are not usually the focus of surveys, meaning there may be even more of these overlooked remnants out there waiting to be discovered.”

They also couldn’t find the remnant of the progenitor star, suggesting that the explosion was type Ia. This is consistent with the location, too, since massive stars tend to concentrate in the galactic plane.

eROSITA will perform a total of eight all-sky surveys. The team hopes that data from future surveys will help reveal the nature of Hoinga – and find many more of the Milky Way’s ‘missing’ supernovae.

The team’s research is due to appear in Astronomy & Astrophysics, and is available on arXiv.

This Seemingly Simple Foot Feature May’ve Allowed Sauropods to Become Giants
Many Cat Lovers Are Giving Their Cats Unwanted Affection, Study Suggests
Deepwater Horizon Oil Spill Still Detectable 10 Years Later, Scientists Say
This Artificial Synapse Can Run a Million Times Faster Than Ones in The Human Brain
The human brain may not be shrinking after all