In June 2015, we were treated to a spectacle. A black hole 7,800 light-years away awoke from a nap to devour a chunk of star – a messy process that resulted in a screaming flare of light blazing across the galaxy.

The echoes of that light, shown in a newly released image, are allowing astronomers to map and understand the invisible space dust drifting between the stars, as described in a paper published in 2016.

That object is part of a binary system named V404 Cygni, found in the northern constellation of Cygnus. The black hole is what’s known as a microquasar, surrounded by material on which it feeds.

That material is being siphoned off the black hole’s binary companion, an early-stage red giant; as the two pirouette their extremely close orbital dance, the black hole’s gravitational field strips the red giant’s outer material.

This process is what caused the 2015 outburst. As concentrations of material from the star entered the black hole’s accretion disc, it let off a series of intense X-ray light pulses, which we detected here on Earth.

Those pulses also did something interesting in the space around V404 Cygni. As the light traveled out into the dust around the system, it echoed off it, producing a series of concentric rings of X-radiation.

This is not unknown, but it’s rare. Just three other bright X-ray light echoes had been detected from flaring stars in the Milky Way galaxy. So, naturally, astronomers took the opportunity to use the echoes produced by V404 Cygni to find out more, not just about the outburst behavior of the black hole, but the cosmic dust surrounding it. 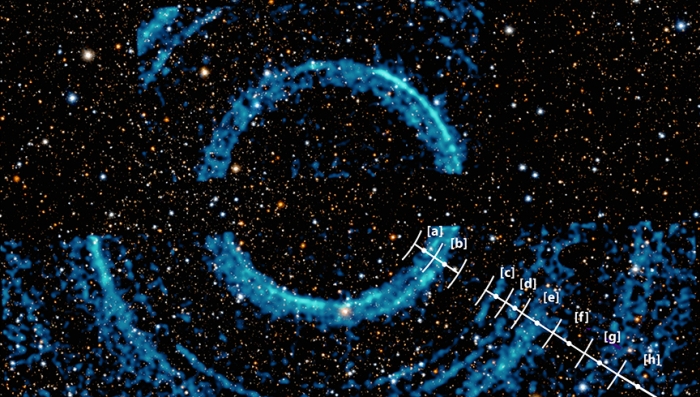 Images from the Chandra X-ray Observatory show eight concentric rings, created by a flare from the black hole, travelling through dust between us and the binary. The rings are thin, because the flare was short.

The diameters of the rings are revealing, too. They tell us the distance between the ring and ourselves, because we know the distance to V404 Cygni and how fast light travels. The closer rings have larger diameters, the farther rings smaller – think of looking down a tube. Perspective will make the close end of the tube look larger than the far end. Illustration shows in detail how the ringed structure is produced. (Univ. of Wisconsin-Madison/S.Heinz)

The eight rings, therefore, represent eight separate clouds of dust encountered by the light as it propagated through space.

Finally, the light echoing off the dust can be analyzed to determine the structure and composition of the cosmic dust. Certain elements absorb certain wavelengths of the X-ray light, which means scientists can study the X-ray spectrum that reaches us to see what the dust is made of. They found that the cosmic dust is likely mostly silica and graphite, and also that it is not uniform in all directions.

This particular study was published in 2016, but continuing to observe the light echoes will allow scientists to learn more about the usually invisible dust between the stars. In addition, V404 Cygni is rowdy, experiencing an outburst roughly every few decades, so we can expect future flares to help us understand how interstellar dust might change over time.

There’s a lot more we can learn from such outbursts, too. For example, the 2015 outburst showed us that the V404 Cygni black hole’s magnetic field was way weaker than we expected it to be; and that the black hole is also wobbling, because of the way it drags space time.

There have, in fact, been rather a lot of papers published on the 2015 V404 Cygni outburst. It’s the black hole gift that keeps on giving, and will likely continue to do so, well into the future.

Just imagine if everyone looked at you like that every time you ate a snack, though.

The paper was published in 2016 in The Astrophysical Journal.