Let’s face it. Most of us are never going to go to space. And none of us are going to visit the Orion Nebula. But we can dream – and now thanks to NASA, we can selfie our way into some of the most spectacular scenery in the Milky Way.

To celebrate the 15th anniversary of the launch of the Spitzer Space Telescope, NASA has released a delightful NASA Selfies app for iOS and Android phones.

It’s very simple. You snap a pic of your face (or someone else’s face) centred in the frame, using the front or rear camera, and it’s inserted into the helmet of an astronaut suit.

You can then choose a background of some of the many space wonders imaged by Spitzer over the last 15 years, and save it to your phone.

You can’t upload previous photos from your photo gallery, and there’s no share button, so you’ll have to share your photos to the #NASASelfie hashtag the good old-fashioned way - by going to your camera roll and sharing from there. 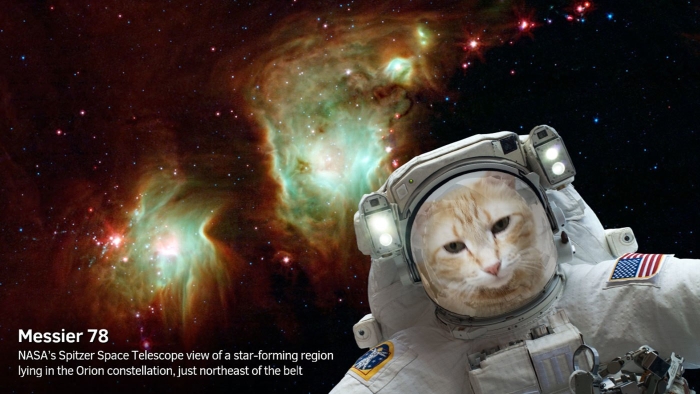 Also, just a heads up, it only orients correctly in landscape, so if you take a photo holding your phone in portrait orientation, you’re going to end up looking like a severed head floating in a spacesuit (as you can see, we had trouble correctly orienting doge in the cover pic).

NASA also released a VR experience that takes you on a guided tour of the exoplanets of the TRAPPIST-1 system, available for Oculus, Vive and smartphone VR via YouTube 360.

It’s not, obviously, constructed from direct images, but science’s current understanding of the conditions on those planets is based partly on Spitzer data. You can grab that here.

You can download NASA Selfies for free for iOS here and for Android here.