The “little helicopter that could” has done it again.

NASA’s Ingenuity helicopter on Mars, a tissue-box-sized rotorcraft that landed with the Perseverance rover in February, completed its 10th flight over the red planet on Saturday.

Each Ingenuity flight has been more daring than the last. So Saturday’s flight was likely the helicopter’s riskiest yet: If everything went according to plan, Ingenuity climbed 40 feet (12 meters) in the air, then headed south-by-southwest toward a collection of rock features called “Raised Ridges,” before looping back around to a landing zone about 310 feet (94 m) west of its initial takeoff spot.

Before Saturday, Ingenuity had already flown nearly one mile in total, so its 10th flight helped it hit that threshold.

The flight should have lasted about 2 minutes, 45 seconds. During that time, Ingenuity is expected to have visited 10 distinct waypoints, snapping photos along the way.

Flight 10 is a significant milestone, since Ingenuity has now flown twice as many times as NASA engineers originally planned. NASA expected Ingenuity to crash on its fourth or fifth flight as it tested the limits of its speed and stamina. 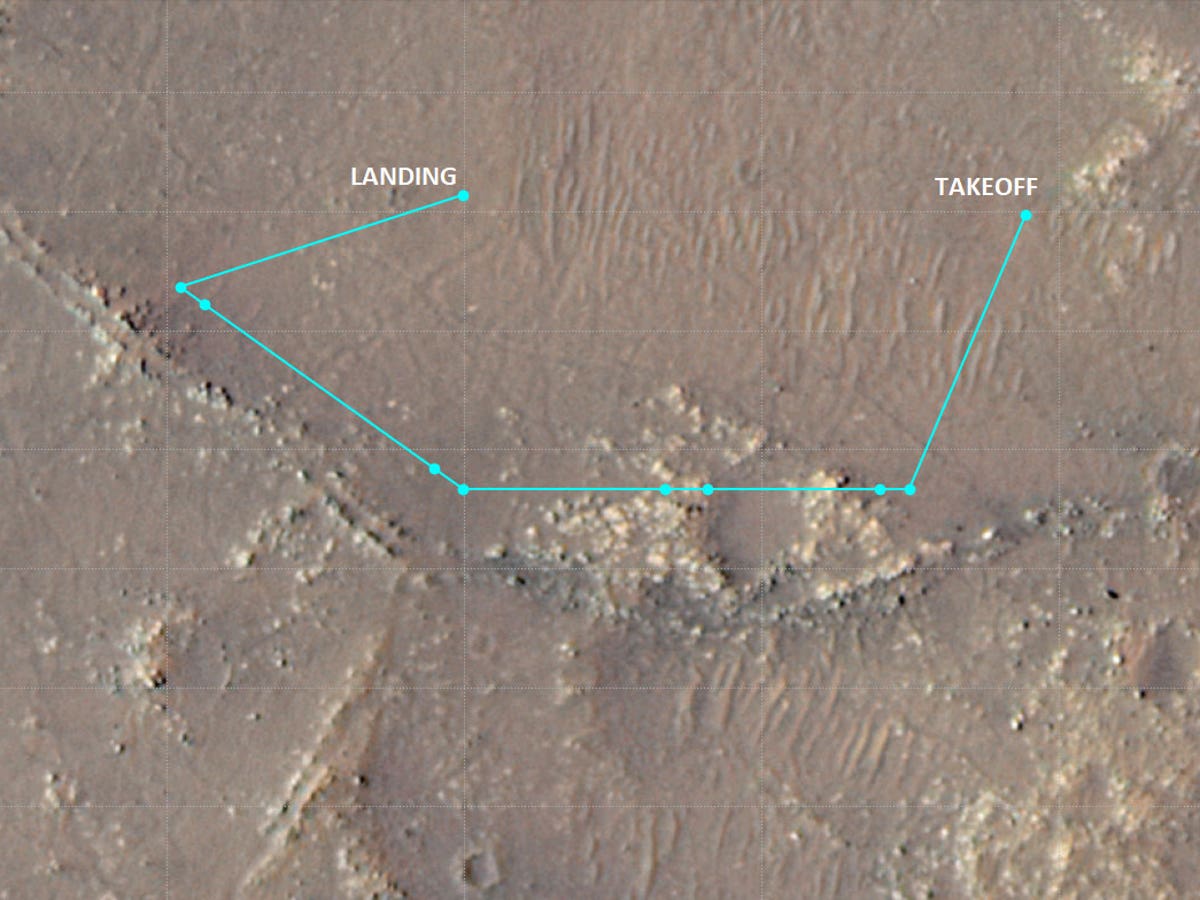 But Ingenuity has continued to exceed expectations. Even when a glitch led the helicopter to wobble mid-air in May during its sixth flight, it still managed to touch down safely.

The drone started out as a technology demonstration, but NASA gave Ingenuity a secondary mission in late May after its fourth flight. Since then, Ingenuity has started scouting new Martian terrain and testing operations that NASA might want to conduct with future space helicopters. In its recent flights, Ingenuity has explored unsurveyed areas of Mars’ Jezero Crater – a 28-mile-wide (45 kilometer) impact basin that was filled with water about 3.5 billion years ago – landing in new spots each time.

The uneven landscape is a challenge for Ingenuity, since rocky or rippled land can distort its field of view, causing it to veer in the wrong direction. Ingenuity’s ninth flight earlier this month was a “nail-biter,” NASA scientists said, since the helicopter had to cross over particularly treacherous terrain.

Ingenuity is still proving itself useful on Mars, but its future is uncertain

In Ingenuity’s first four flights, the rotorcraft landed in the same spot it lifted off. Its fifth flight led it to touch down in a new airfield that it had previously flown over, photographed, and mapped. But these recent flights have sent Ingenuity traveling south over uncharted territory.

NASA engineers haven’t said when Ingenuity’s mission will end, but the helicopter could keep flying as long as it stays alive and doesn’t interfere with the science work of the Perseverance rover.

Ingenuity captured a photo of its shadow during its 7th flight on Mars. (NASA/JPL-Caltech)

Perseverance is combing Jezero Crater in search of potential fossils of ancient alien microbes. Ingenuity’s new operations can assist with that mission: The helicopter can scout and map terrain, spot promising areas for study from the air, and fly to spots the rover can’t reach.

NASA scientists are particularly curious about “Raised Ridges,” since water may have once flowed there. During its ninth flight, Ingenuity also snapped color images of intriguing rock outcrops that Perseverance might examine later.

“We’re hoping the color images will provide the closest look yet at ‘Pilot Pinnacle,’ a location featuring outcrops that some team members think may record some of the deepest water environments in old Lake Jezero,” NASA scientists wrote in a recent blog post.

It’s possible, though, that Perseverance’s tight schedule won’t allow it to visit the rocks, “so Ingenuity may offer the only opportunity to study these deposits in any detail,” the scientists said.

Hubble has captured the startling ‘eye’ of a massive stellar explosion
This insane new image of the Moon’s Tycho Carter is so detailed it barely looks real
We may finally know what caused that huge ozone hole in the Arctic last year
Mysterious skeletons of an unknown people rewrite the history of Japanese ancestry
There’s a pretty glaring issue with Tesla’s Autopilot, says new study