Tithonium Chasma is one big canyon. At a staggering 810 kilometres (503 miles) long, it’s a large part of Valles Marineris – the biggest canyon system we know of in the whole Solar System.

This close-up image of the chasma was taken back in 2013 by the High Resolution Imaging Science Experiment (HiRISE) camera on board the Mars Reconnaissance Orbiter, and was just featured as the HiRISE Picture of the Day.

The image shows around a kilometre (0.6 miles) of Mars terrain with torturous hills and valleys, but as you can see in the other images, when you start to zoom out, this is just one small section of a gigantic whole. 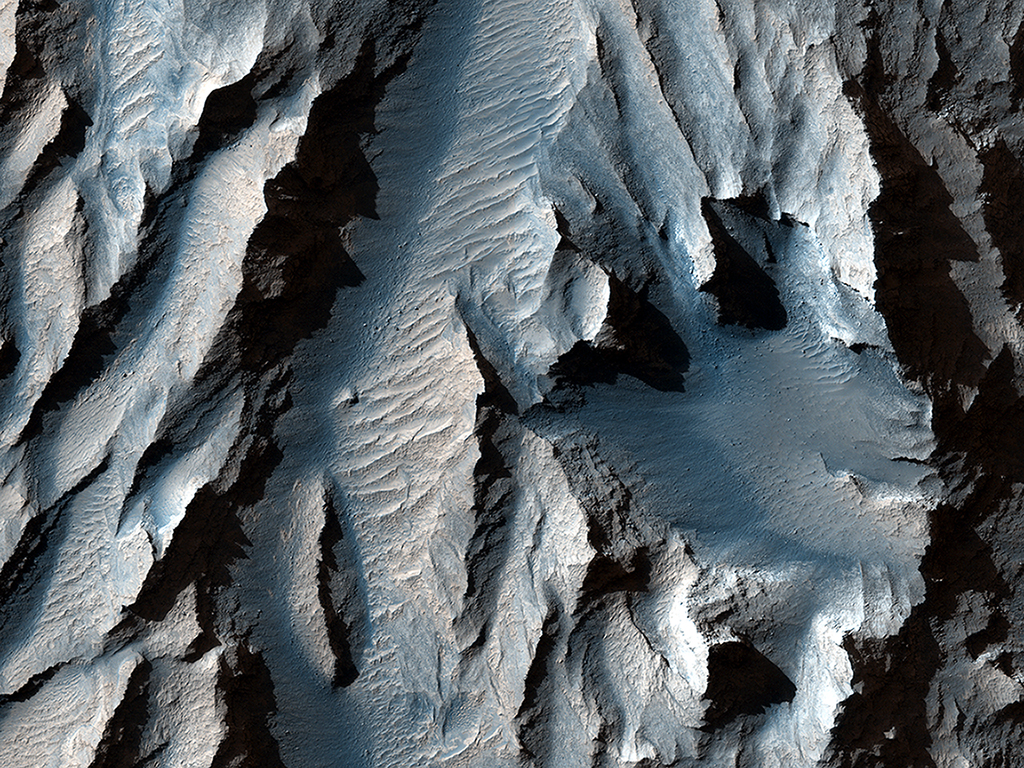 But how did it get there? The Grand Canyon on Earth – which is five times shallower and 10 times shorter than the Valles Marineris – was carved by the Colorado River.

But scientists aren’t sure what would have formed the 8- to 10-kilometre (5 to 6.2 miles) deep canyon of Valles Marineris and Tithonium Chasma, so they’ve been taking photos to try and find out.

We know that the tilt of Mars’s axis (called the obliquity) is not as stable as Earth’s, ranging widely from over 60 degrees to under 10 in the ancient past.

An uncropped, uncoloured version of the picture above. (NASA/JPL/UArizona)

“It is possible, though unproven, that higher obliquity triggered partial melting of some of Mars’ water ice,” HiRISE spokesperson Edwin Kite wrote back in 2014.

“Our best chance at understanding this is to find piles of ice, dust, silt or sand that accumulated over many cycles of obliquity change.”

The image of Tithonium Chasma above shows these findings. The sediment layers – those dark and light stripes running diagonally down the middle of the image – are relatively uniform, possibly showing the gradual buildup of sediments over many long cycles of this axial tilt change.

A map showing the location on the Valles Marineris. (NASA/JPL/UArizona)

Even seven years after this photo was taken, we’re still not sure what created the Valles Marineris. Some researchers suspect a large tectonic “crack” may have split Mars’ surface, to be later enhanced by lava flow, or potentially water if the planet’s axial tilt was just right.

But really, although these images are scientifically interesting to astronomers, they’re also just gorgeous.

The staggering scale of these otherwordly peaks and troughs, captured by a spacecraft 264 kilometres (163.8 miles) from the planet’s surface, really can’t be understated.

You can see even more pictures of the Valles Marineris here.

This Arctic Fish Is Packed to The Gills With Antifreeze, Scientists Discover
Researchers in South America Discover a New Species of Tiny but Tough Dinosaurs
Hundreds of Shimmering Crystal Fragments Discovered at Prehistoric Burial Site
Weird Creature With No Butt May Not Be Our Ancient Ancestor After All
Scientists Achieved Self-Sustaining Nuclear Fusion… But Now They Can’t Replicate It