Sometimes, the Universe provides just the perfect method for expressing our feelings.

A space cloud 7,500 light-years away has given us the most appropriate farewell we can think of for this whole dumpster fire of a year, 2020.

This small clump of material is part of a much larger cloud complex called the Carina Nebula, and under normal circumstances would not be given a nickname of its own. But its distinctive shape has led scientists to nickname it the Defiant Finger.

And that’s exactly what it looks like – the age-old obscene gesture of “go do ghastly things to yourself”, and “go away, but in much ruder words”. 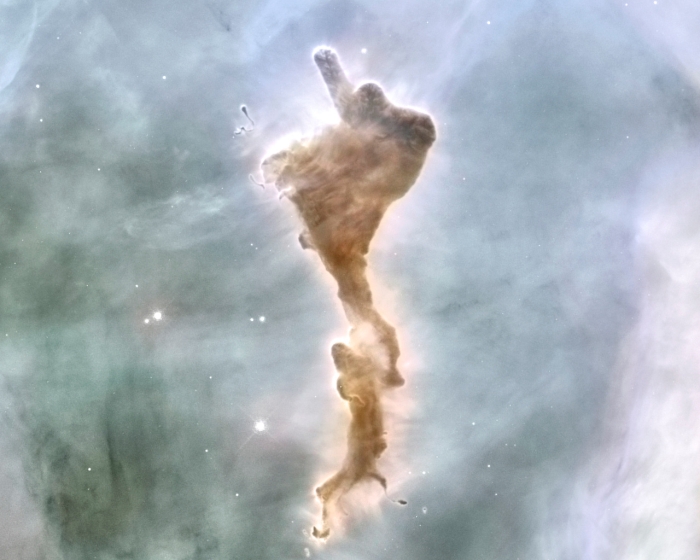 Actually, the Defiant Finger is what is known as a Bok Globule. These are small, dark, dense knots of dust and gas that are often the birthplaces of stars. As denser regions of the cloud condense further, they can collapse down under their own gravity, and start spinning into a star.

The Defiant Finger, comprising 6 solar masses worth of material, may have stars forming within it; because it’s so dense, it’s hard to see inside. The glow it appears to have is from external sources – the light of bright stars nearby.

Because young stars are typically bright and hot, they blast their surroundings with radiation. The exterior of the Defiant Finger globule is likely being lit and ionised by either the Wolf-Rayet star WR 25, a very short-lived, massive star at the end of its lifespan; Tr16-244, a hot young supergiant; or a combination of both.

But while they illuminate, these stars also destroy: slowly but surely, they are evaporating the Defiant Finger. At the current estimated rate of mass loss, the cloud of dust has a projected lifespan of just 200,000 to 1 million years.

That’s not very long in cosmic terms, not very long at all. But it’s long enough to make a poetic statement: a scream into the void, a defiant gesture in the face of inevitability. And a really appropriate way to close the door on 2020.

This New Diamond-Based Process Could Help Save The Ocean From Microplastics
Stunning video reveals Mount Etna erupting, as Europe’s largest volcano lets loose
Critical Test of NASA’s Giant Moon Rocket Cut Short By ‘Major Component Failure’
Scientists are figuring out why some people can ‘hear’ the voices of the dead
Mesmerizing video reveals RNA folding in all its strange, tangled glory