In our limited experience, comet 2I/Borisov is one of a kind.

It was discovered in August 2019, on a trajectory that could only mean one thing – the object had come from outside of our Solar System. It was the first known comet to visit from interstellar space, and represented a unique opportunity to study exocomet formation.

New analyses have now proven that 2I/Borisov is even more special than we thought. Based on a close examination of the comet’s dust, scientists have determined that it’s likely the most pristine comet we’ve ever seen.

This suggests the comet has never been close to a star – the closest it’s been was when it flew by our Sun in 2019 – which means it’s essentially unchanged since it formed from the cloud of dust it was born in.

“2I/Borisov could represent the first truly pristine comet ever observed,” said astronomer Stefano Bagnulo of the Armagh Observatory and Planetarium in Northern Ireland.

The new analyses are detailed in two papers that studied the comet’s dust coma - the cloud of dust that appears around a comet when it draws close to the Sun. The proximity heats the comet, causing its ices to sublimate.

As the gases rise up from the comet (the gas coma), they bring dust particles with them, creating the dust coma. (Solar radiation pressure and solar wind then push the gas and dust away, forming the comet’s tails – that’s why a comet’s tails always stream away from the Sun.) 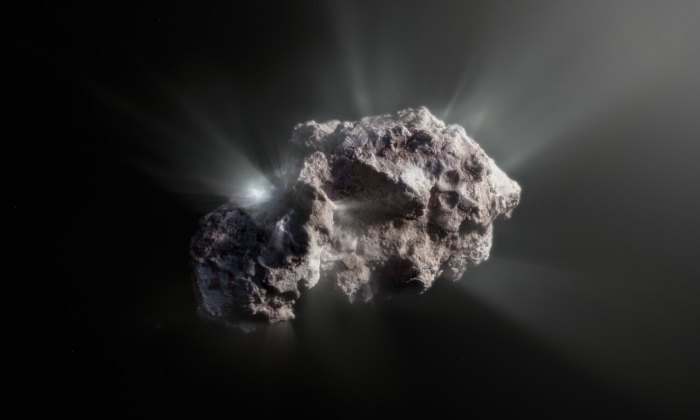 In the first paper, Bagnulo and his colleagues made a careful study of the light scattered off the dust grains in the coma. In particular, they studied the polarization of this light.

As a particle of light travels through space, its oscillations are oriented in a certain direction. If it is scattered by, for example, dust in the interstellar medium, or rotated by a magnetic field, its orientation can change; we call that change polarization, and it can tell us about the environment that it came from. Recently, it revealed the shape of a magnetic field around a supermassive black hole. With comets, it reveals properties of the dust coma.

Many comets have been studied using polarimetry, and Bagnulo and his team were able to compare their 2I/Borisov data against Solar System comets. They found that the light from our interstellar interloper was significantly more highly polarized than the light scattered off Solar System comets.

This higher polarization, according to previous studies, is associated with more plentiful, and smaller, dust grains – suggesting, in turn, that the comet has not yet had its dust blown away by radiation pressure and the solar wind.

The only Solar System comet with a similar polarization profile to 2I/Borisov is Hale-Bopp, which is thought to only have passed the Sun once before its most recent close approach in 1997, and has therefore only been minimally affected by the wind and radiation. Still, 2I/Borisov is different – its polarized light is uniform, which means that it could be more pristine even than Hale-Bopp.

“The fact that the two comets are remarkably similar suggests that the environment in which 2I/Borisov originated is not so different in composition from the environment in the early Solar System,” said astronomer Alberto Cellino of the National Institute for Astrophysics in Italy.

The second paper, led by astronomer Bin Yang of the European Southern Observatory, a team of scientists took a closer look at the dust grains themselves, as well as the gas coma.

The dust coma, they found, consists of compact “pebbles” with radii greater than 1 millimeter – quite different from the loose aggregates normally found around Solar System comets. The compaction, they said, seems to be the result of mutual impacts arising from collisions in the protoplanetary disc in which the comet formed – indicating that the comet was born from rocks colliding and sticking together.

The gases they detected as 2I/Borisov neared and sped away from the Sun, however, told a really interesting story. Both carbon monoxide and water were present in the gas coma – a lot of carbon monoxide, actually – but the relative proportions in the coma changed dramatically during and after its closest approach to the Sun.

This indicates that the distribution of materials in the cometary nucleus is uneven. According to the team, this could happen if the comet’s distance to its home star changed as it was forming, perturbed by the gravitational influences of baby gas giants. Under these perturbations, the forming comet could have moved to different locations beyond the frost line (the point at which volatiles freeze into ice grains) with different chemical abundances.

This mixing, the team said, is similar to processes thought to have taken place in the early Solar System, too. But rather than ending up on a long orbit around its own star, 2I/Borisov got punted out into interstellar space. There, it finally had a close flyby of a different star – our Sun – offering astronomers an amazing opportunity to learn about the planetary formation conditions in another system, far from home.

“Imagine how lucky we were that a comet from a system light-years away simply took a trip to our doorstep by chance,” Yang said.

The research has been published in Nature Communications and Nature Astronomy.

Scientists Say ‘Space Bubbles’ Could Shield Earth From The Sun, But Would It Work?
This Seemingly Simple Foot Feature May’ve Allowed Sauropods to Become Giants
Astronomers Charted The Sun’s Life, And This Is How The Story Ends
The Moon Stole Something From Deep Inside Earth Eons Ago, and Scientists Can Prove It
Robot Shows It’s Possible to Swim Through The Emptiness of a Curved Universe