A strange feature on the surface of Mars has kept scientists guessing about its origin. It’s a surface deposit of a mineral which is more common in the interiors of planets. A new study shows that this interior mineral was probably brought to the surface by an ancient explosive volcano.

Nili Fossae is located in the Syrtis Major region on Mars. It’s near the Isidis Planitia, a huge plain inside an impact basin on Mars.

Nili Fossae is interesting because of the mineral deposits in the area, and what those deposits tell us about Mars. Specifically, it contains a large deposit of the mineral olivine, which is typically found in the interior of planets.

The question this study tried to answer is how did the olivine find its way to the surface?

Olivine itself is not rare or remarkable. In fact, it’s the primary component of the Earth’s mantle. It’s not rare on Mars either. The word olivine actually covers a group of minerals that are very similar. For one, they’re all greenish, which explains the “olive” in olivine.

With that in mind, the explanation may seem rather obvious. Of course this deposit of olivine came from a volcano. How else could it have gotten to the surface from the mantle?

But science is all about the details. When, exactly, in Martian history was this olivine deposited by a volcano? In what context did it happen, and was it part of larger events that shaped Mars? What type of volcanic event created it?

Those questions, and the size of the olivine deposit in question, are what make this study interesting.

The paper is called A widespread olivine-rich ash deposit on Mars and is published in the journal Geology. 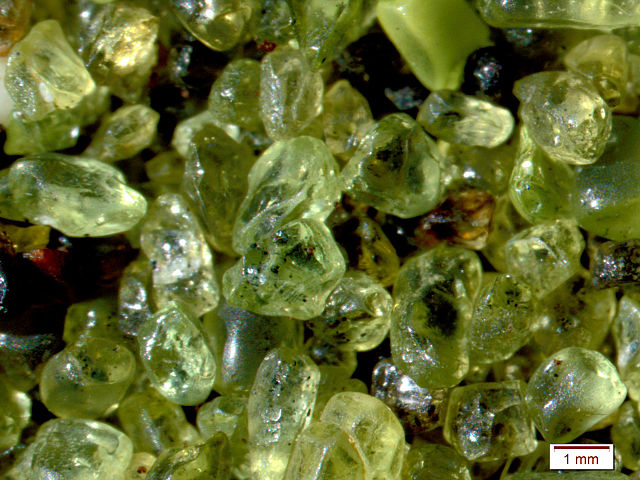 There exists a certain type of person who is extremely interested in minerals. Far from being an unusual, anti-social obsession pursued in a distant corner of a university campus, the study of minerals is a building block of planetary science.

Without our understanding of minerals, we have no hope of piecing together the history of Earth. We would also be ignorant about all the other planets in our Solar System, and about asteroids and meteorites, too.

When it comes to Mars, the importance of understanding minerals cannot be over-emphasized. The types of minerals we see, where we see them, and how they got there, are all clues to understanding Mars.

And when scientists spot an unusual deposit of minerals there, they want to know how it got there.

Mars is a jigsaw puzzle. We’re nowhere near completing it, but piece by piece we’re beginning to understand the history of that planet. Specifically, we want to know if it was ever habitable, and if it might yet be home to some microscopic life.

Those questions can’t really be answered directly: they have to be revealed by completing the Martian jigsaw puzzle.

This unusual deposit of olivine is one of the pieces of the puzzle.

This olivine deposit was first discovered in 2003 and presented in a paper in Science. That paper announced the discovery of a 30,000 square kilometer area with about 30 percent olivine.

The area is notable for its geological formation. It’s an area of what are called grabens. Grabens are valleys with sharp escarpments on both sides, caused by the downward displacement of blocks of land.

In that initial paper, the authors said that “post-impact faulting of this area has exposed subsurface layers rich in olivine.” Over the years, other researchers have come up with other possible explanations.

Some have suggested effusive lava flow. Others have suggested that the olivine was dredged up by a massive impact. Perhaps the same impact that created the enormous Isidis Basin where the deposit is located.

This new study says that the olivine was deposited by explosive volcanism. 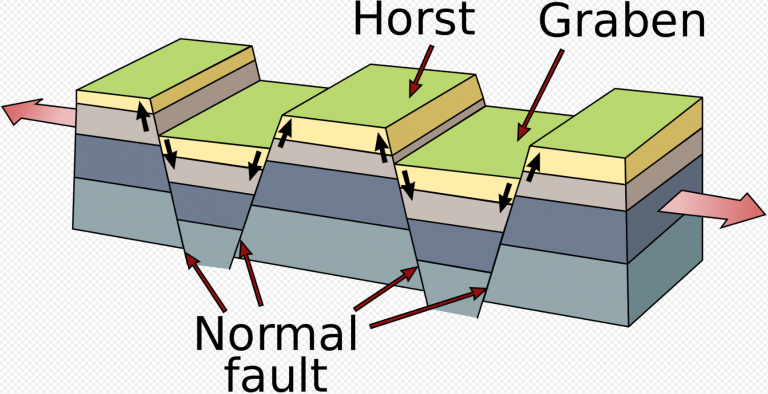 Grabens are valleys with sharp escarpments on both sides. (Horst_graben/US Geological Survey)

For most of us, a volcano is a volcano. But there are different types. One type is called explosive volcanism.

“This is one of the most tangible pieces of evidence yet for the idea that explosive volcanism was more common on early Mars,” said Christopher Kremer, a graduate student at Brown University who led the work.

Explosive volcanism happens when magma contains dissolved gases like water vapour. That dissolved gas creates a lot of pressure in the magma, and when the overhead rock can’t withstand the pressure, it explodes. That explosion sends a massive amount of fiery ash and lava into the air.

Since explosive volcanism requires water vapour, scientists think that this type of volcanic explosion happened early in Mars’ life, when there was more water around.

Over time, Mars lost its water, and volcanic activity would have been less explosive. It would have been replaced by what’s called effusive volcanism, which is gentler and causes lava to flow across the surface, rather than explode into the air.

According to Kremer, there’s lots of evidence for this effusive volcanic phase in Martian history, whereas evidence for the earlier, explosive phase is not so easily discovered, especially with orbital instruments.

“Understanding how important explosive volcanism was on early Mars is ultimately important for understanding the water budget in Martian magma, groundwater abundance and the thickness of the atmosphere,” said Kremer. 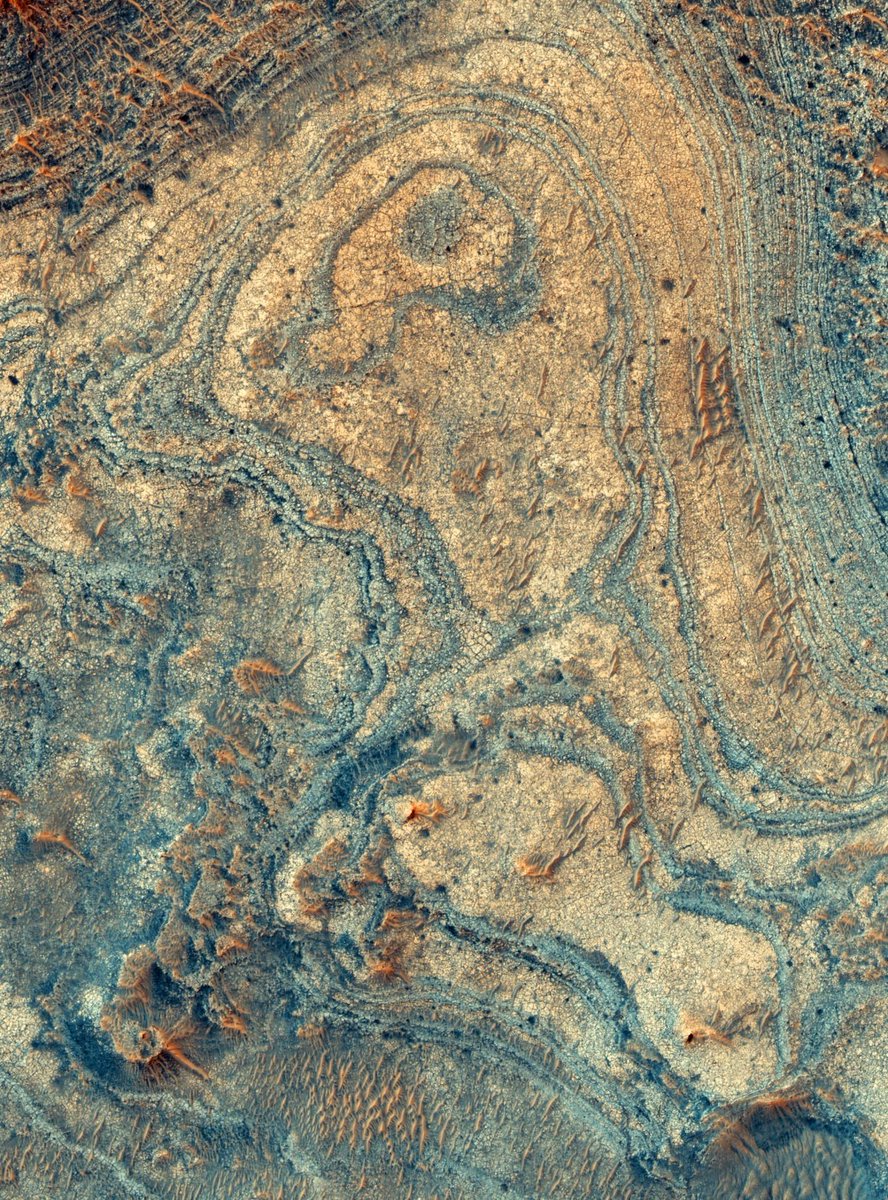 For now, all scientists have to study this deposit with are orbital instruments. Kremer and his colleagues used high-resolution images from NASA’s Mars Reconnaissance Orbiter (MRO) to study the geology of the area in detail. As Kremer said in a press release, they took a different tack when studying the area.

“This work departed methodologically from what other folks have done by looking at the physical shape of the terrains that are composed of this bedrock,” Kremer said.

“What’s the geometry, the thickness and orientation of the layers that make it up. We found that the explosive volcanism and ashfall explanation ticks all the right boxes, while all of the alternative ideas for what this deposit might be disagree in several important respects with what we observe from orbit.”

One of the things that differentiate this deposit from other effusive lava flow areas is the distribution of the lava itself. While an effusive flow would basically spread liquid rock over the surface, where it would pool in low-lying areas, this deposit is in long continuous layers over valleys, craters, hills, and other features.

According to Kremer, that is much more consistent with ash settling from an explosive eruption than it is with lava flow.

The continuous deposit also rules out the impact scenario too. The Isidis impact that created the Isidis Basin cannot have created such a uniform layer of ash. Also, the ash is deposited on top of some of the features created by the Isidis impact.

The condition of the olivine itself also rules out the impact scenario. The olivine shows evidence of sustained and widespread contact with water. The olivine was altered by that contact, much more than other olivine on Mars.

The authors say that only makes sense of this olivine was from ash fall, since is ash is much more porous than other rocks, and would have allowed the water to contact the olivine.

Can a Rover Solve the Puzzle?

It’s difficult to be absolutely certain about something that you can only study from orbit. Luckily, a rover is headed that way.

In 2020, NASA’s Mars 2020 rover will be launched on its way to Mars. Its landing site? The Jezero Crater, which is inside the olivine deposit. There are exposed areas of olivine accessible to the rover, and it seems certain that the 2020 rover will study it.

“What’s exciting is that we’ll see very soon if I’m right or wrong,” Kremer said. “So that’s a little nerve wracking, but if it’s not an ashfall, it’s probably going to be something much stranger. That’s just as fun if not more so.”

“One of Mars 2020’s top 10 discoveries is going to be figuring out what this olivine-bearing unit is,” said Mustard, Kremer’s advisor. “That’s something people will be writing and talking about for a long time.”

From there, we’ll know something about Martian habitability.

The very first forms of life may have been more animal-like than we ever realised
14-year-old from Texas wins top science prize for coronavirus molecule discovery
Oxygen supply just failed in part of the ISS, but everyone is safe so far
Scientists measure the shortest length of time ever: zeptoseconds
Voyager spacecraft detect an increase in the density of space outside the Solar System