What you’re seeing in this remarkable image from the Very Large Telescope (VLT) in Chile is something that’s never been observed anywhere else: A planetary nebula made up of two closely bound stars orbited by a third outer star.

That third star wasn’t spotted until centuries after the discovery of the nebula itself, known as NGC 246, or sometimes called the Skull Nebula or the Pac-Man Nebula – because of the shapes created by its stars and the gases swirling around them.

No other nebula seen by our telescopes has such a configuration. These celestial phenomena typically form around one or two central stars, as they expel their outer layers at the end of their lives. 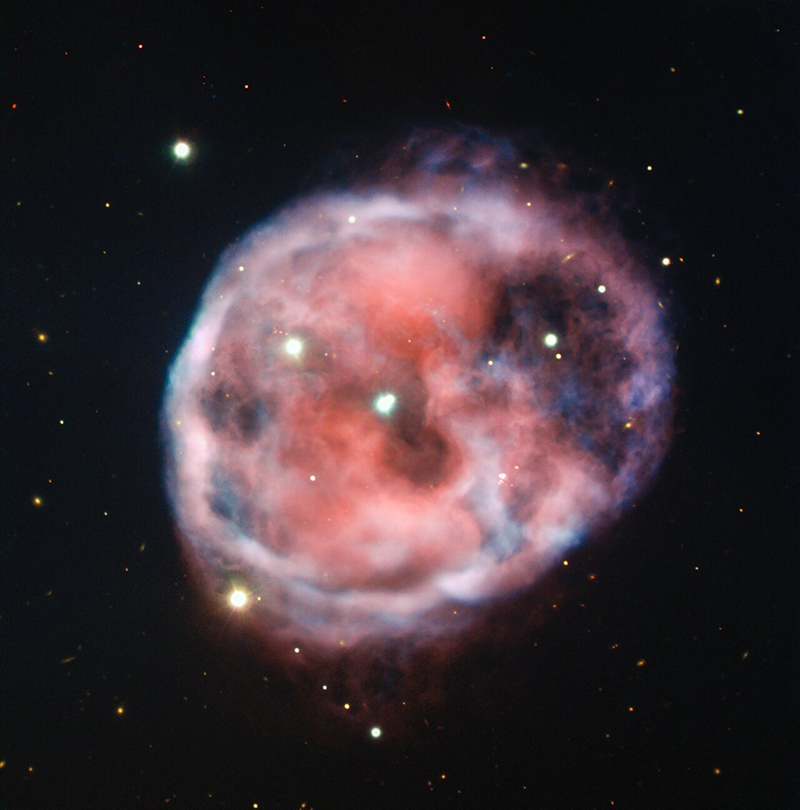 Here we have a white dwarf star and a dim red dwarf star (which you can’t actually see in this picture) orbiting each other, and then a third star orbiting the other two. The third star is about four times further away than the two other stars are from each other, or around 1,900 times the distance between Earth and the Sun.

If you want to get technical, it’s a hierarchical triple stellar system, and no other planetary nebula that we know about demonstrates the same phenomenon. We’ve spotted about 1,800 of these planetary nebulas, but there are thought to be thousands more out there.

The luminous gas in nebulas can take on all kinds of weird and wonderful shapes, and appear around stars like our Sun. One day the burning mass at the centre of our own Solar System may put on a light show something like this.

Snapshots like this one help astronomers get a better understanding of stars, their composition, and their evolution. In this case, the FORS 2 instrument was used – the FOcal Reducer and low dispersion Spectrograph – on board the VLT, and it’s produced a stunning, dramatic picture.