The second-largest radio telescope in the world collapsed on Tuesday morning.

The Arecibo Observatory’s 900-ton platform, which sent and received radio waves and was suspended 450 feet (140 metres) in the air, crashed into the 1,000-foot-wide (300-metre-wide) disk below. When it fell, it pulled down with the tops of three surrounding support towers.

Videos of the crash show that it began when cables that connected the hanging platform to one of the towers snapped. Previously, an auxiliary cable on that same tower broke in August, then one of its main cables broke in November.

Since then, the National Science Foundation, which owns Arecibo, had been rushing to disassemble the telescope, since it was clear a complete collapse was possible.

But the platform fell before engineers made much headway in the deconstruction process.

Jonathan Friedman, who has been part of the Arecibo Observatory’s scientific staff since 1993, told local news outlet NotiCentro the collapse sounded like the rumble of an earthquake, a train, or an avalanche.

The video below, captured from a nearby control tower, shows the platform falling at 7:54 am local time. A cable takes out the catwalk that allowed engineers to access the platform.

The top of the tower where the cables broke, visible in the background, then falls. Then the top of another broken tower comes rolling down the hillside on the left.

(Courtesy of the Arecibo Observatory, an NSF facility) pic.twitter.com/9zvyrUsfJl

“As you can see, this was a very violent and kind of unpredictable failure,” Ashley Zauderer, NSF program manager for the Arecibo Observatory, said in a briefing on Thursday.

In a separate video, drone footage shows the cables snapping and the resulting crash from above. The drone happened to be doing reconnaissance over the telescope’s platform at that moment, since drone surveillance was a key source of information for engineers trying to figure out how to deconstruct the telescope.

Due to the known risk of collapse, nobody had been allowed to approach the unstable structure since the fateful cable break in mid-November.

The vicinity around the dish and the three towers had been cordoned off, so nobody was injured in the collapse, the NSF said.

Arecibo’s downward spiral began in August, when a 3-inch-thick auxiliary cable popped out of its socket on one of the telescope’s three towers and crashed into the dish. It tore a 100-foot gash in the panels. 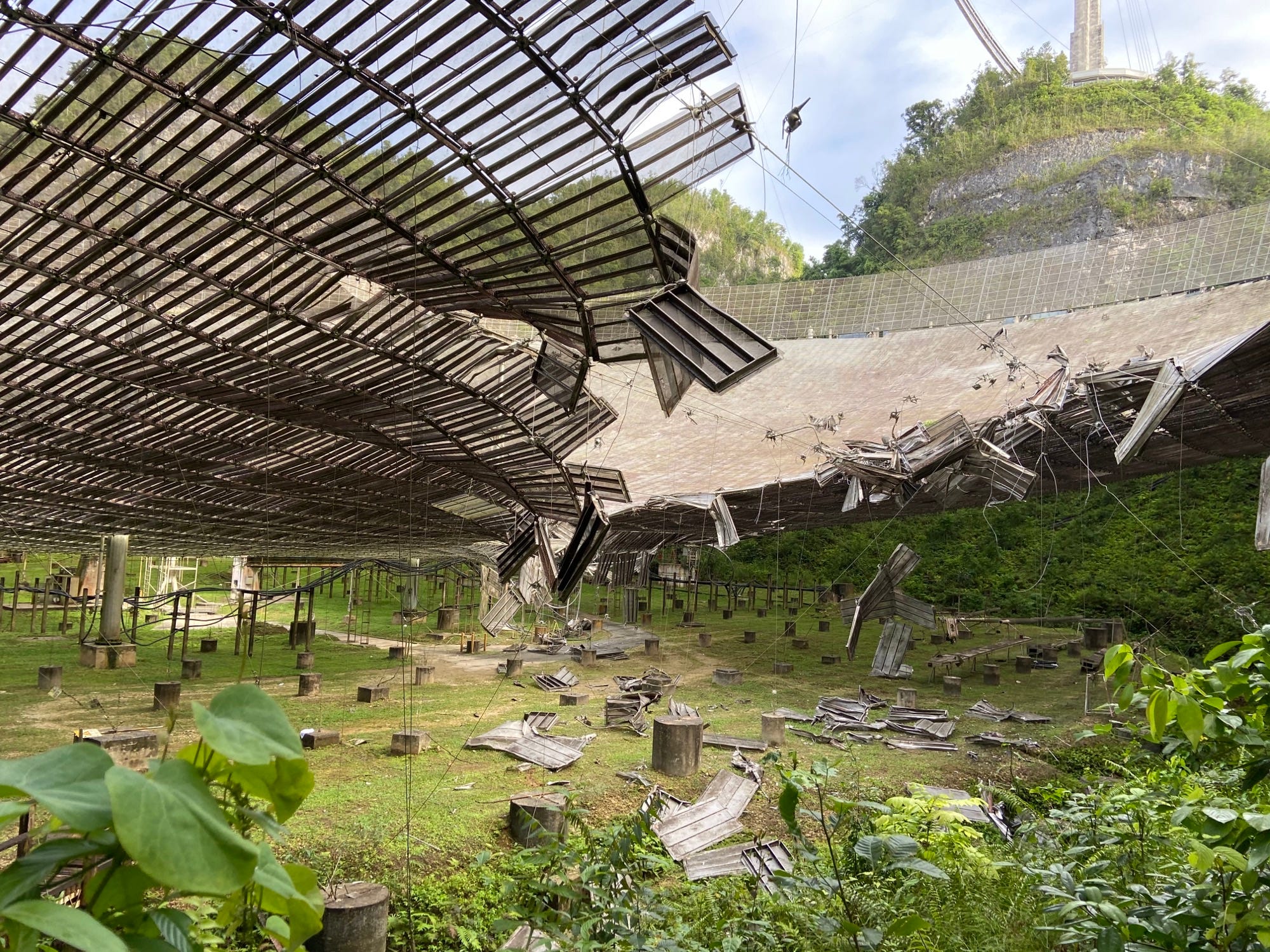 Then the second failure, a snapped main cable, surprised the telescope’s managers in November. An engineering assessment afterward found that the remaining cables were liable to break at any time and send the platform tumbling.

Since the structure was too unstable to save without risk of it collapsing on technicians while they worked on the repairs, the NSF decided to say goodbye to Arecibo, decommissioning the world’s most iconic radio telescope. 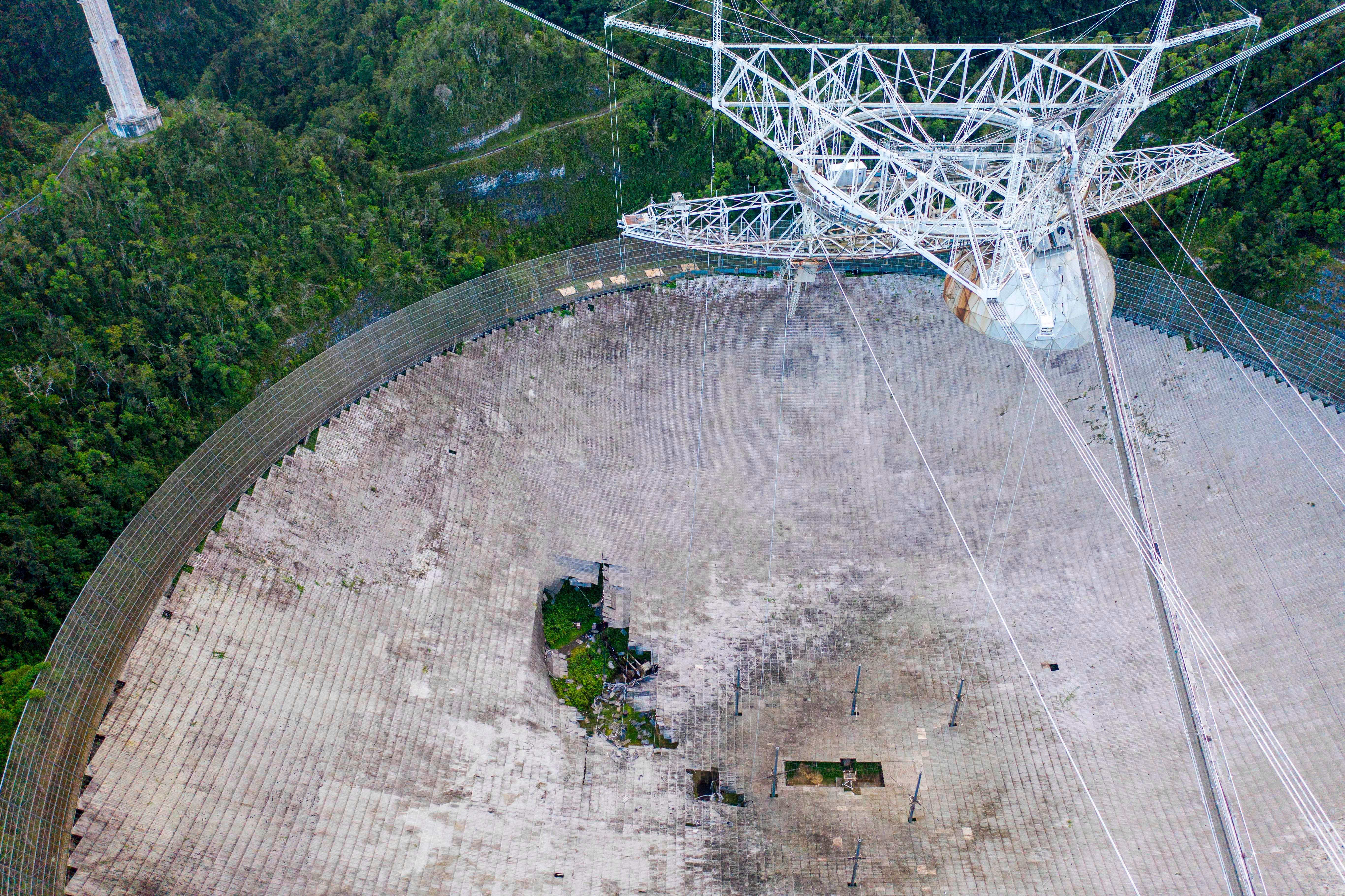 A blow to the search for alien life

In its 57 years of operation, Arecibo hunted for hazardous near-Earth asteroids, searched for signs of alien life, and discovered the first planet beyond our solar system.

In 1974, Arecibo beamed the most powerful broadcast Earth has ever sent to communicate with potential aliens. In 2016, it detected the first repeating fast radio bursts: mysterious space signals that scientists now think come from dead stars.

Arecibo’s massive dish antennae, built into a depression on the Puerto Rican jungle floor, reflected radio waves from space to its suspended platform.

Abel Mendez, director of the Planetary Habitability Laboratory at the University of Puerto Rico at Arecibo, said the loss of the telescope is a major blow to humanity’s search for radio waves sent by other lifeforms. That’s because Arecibo and China’s Five-hundred-metre Aperture Spherical Radio Telescope (FAST) were Earth’s “two big eyes” in radio astronomy.

“If you lose Arecibo, then you lose the ability to monitor – 24 hours a day – a faint source of radio signals,” Mendez told Business Insider before the collapse, adding, “if you are monitoring a source of interest which is in the weak radio spectrum, you need two big radio telescopes: one pointing toward something during the day and the other through the nighttime.”

Other National Science Foundation facilities – the National Radio Astronomy Observatory in Virginia and the Green Bank Observatory in West Virginia – could take on some of Arecibo’s data collection, but they’re not as sensitive to weak radio signals as Arecibo was.

‘Spiteful’ bacteria would rather starve their colony than let freeloaders thrive
This shaggy deep-sea creature looks like an undulating wad of orange spaghetti
New giant deep-sea isopod discovered in the Gulf of Mexico
These spiders look like they’re in REM sleep… which could mean they’re dreaming
Mysterious jets of upside-down lightning are real, and we just got our best look yet