Star-gazers are in for a treat over Christmas, as Jupiter and Saturn will get closer to each other in Earth’s night sky than they have been for nearly 800 years. Set up your telescope, hope for a clear night, and get ready.

The celestial synchronisation has been in the works since summer as Jupiter and Saturn have been moving closer together in the night sky, and between 16-25 December they’ll be separated by only 1/5th the diameter of a full moon.

While the planets won’t physically be close to each other at all, of course, they’ll look like a single point of bright light to anyone looking up at the night sky.

“Alignments between these two planets are rather rare, occurring once every 20 years or so, but this conjunction is exceptionally rare because of how close the planets will appear to one another,” says astronomer Patrick Hartigan from Rice University. 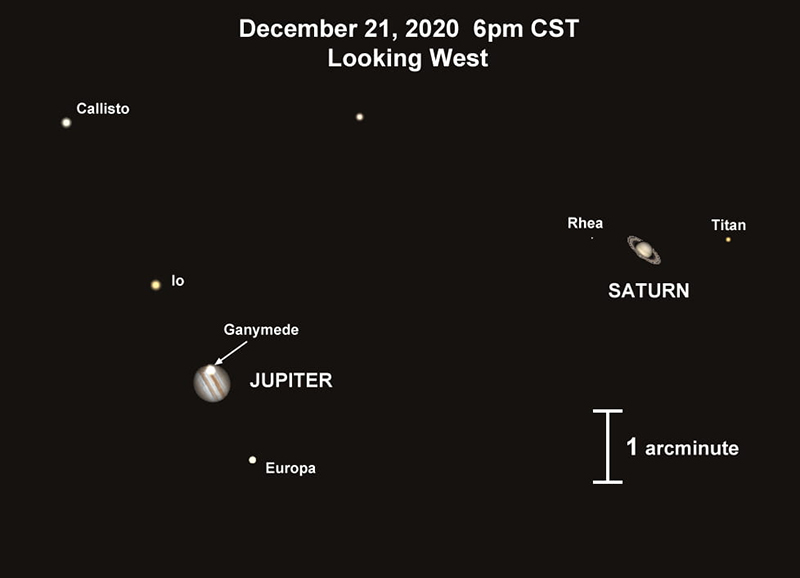 How the Jupiter-Saturn conjunction will appear to telescope viewers. (Patrick Hartigan/CC BY 4.0)

“You’d have to go all the way back to just before dawn on March 4, 1226, to see a closer alignment between these objects visible in the night sky.”

To get the best viewing experience for this spectacular show, you’re going to need to be somewhere near the equator – but if the skies are clear then the alignment should still be visible from just about anywhere on Earth.

The pair of planets will show up in the night sky for about an hour after sunset each evening, according to astronomers. If you’re hoping to catch a glimpse yourself, you’ll need to point your telescope towards the western sky.

“On the evening of closest approach on Dec 21 they will look like a double planet, separated by only 1/5th the diameter of the full moon,” says Hartigan. “For most telescope viewers, each planet and several of their largest moons will be visible in the same field of view that evening.”

“The further north a viewer is, the less time they’ll have to catch a glimpse of the conjunction before the planets sink below the horizon.”

The planets will be bright enough in the sky to be visible in twilight, which might be the best time to try and take a look at them if you’re in the US. Websites such as Stellarium should help you work out where you should be looking from your vantage point.

While this kind of alignment hasn’t occurred since the Middle Ages, it will happen again fairly soon, in March 2080. After that though, Jupiter and Saturn won’t get as close in our night sky until 2400.

When we’re dealing with these sorts of timescales, it always pays to keep up to date with what’s happening around the Solar System – you don’t want to miss something incredible.

Astronomers Charted The Sun’s Life, And This Is How The Story Ends
A Snake-Lover Built Robotic Legs For a Snake, and It’s Insane
‘Extreme Heat Belt’ to Snare 100 Million Americans in Decades, Scientists Warn
Scientists Have Found A New Way to Detect Alien Worlds Beyond Our Solar System
Many Cat Lovers Are Giving Their Cats Unwanted Affection, Study Suggests