Scientific ingenuity means cameras keep on getting smaller and smaller, and the latest to appear is not only incredibly tiny – the same size as a grain of salt – it’s also able to produce images of much better quality than a lot of other ultra-compact cameras.

Using a technology known as a metasurface, which is covered with 1.6 million cylindrical posts, the camera is able to capture full-color photos that are as good as images snapped by conventional lenses some half a million times bigger than this particular camera.

And the super-small contraption has the potential to be helpful in a whole range of scenarios, from helping miniature soft robots explore the world, to giving experts a better idea of what’s going on deep inside the human body. 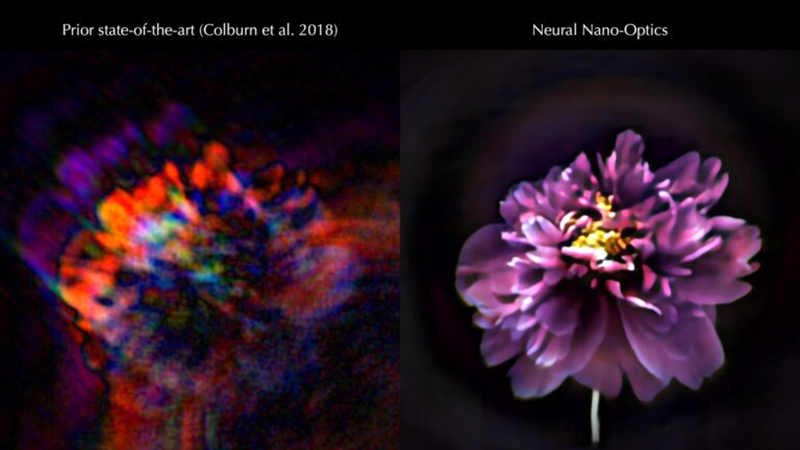 “It’s been a challenge to design and configure these little microstructures to do what you want,” says computer scientist Ethan Tseng from Princeton University in New Jersey.

“For this specific task of capturing large field of view RGB images, it was previously unclear how to co-design the millions of nano-structures together with post-processing algorithms.”

One of the camera’s special tricks is the way it combines hardware with computational processing to improve the captured image: Signal processing algorithms use machine learning techniques to reduce blur and other distortions that otherwise occur with cameras this size. The camera effectively uses software to improve its vision.

Further down the line, those algorithms could be used for more than just image enhancement. They could be deployed to automatically detect particular objects that the camera is looking for, like signs of disease inside the human body.

That processing is added to the metasurface construction that replaces the usual curved glass or plastic lenses with a material a mere half a millimeter wide. Each of the 1.6 million cylindrical posts was individually designed to best capture what’s in front of the camera, with computational modeling used to work out the optimal configuration. 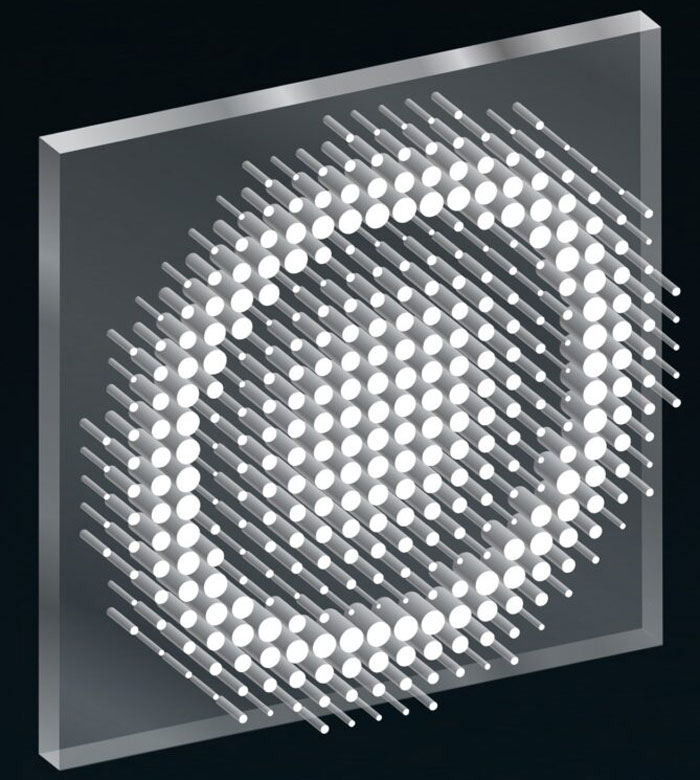 An illustration of the tiny camera’s surface with its many cylinders. (Princeton University)

“The significance of the published work is completing the Herculean task to jointly design the size, shape, and location of the metasurface’s million features and the parameters of the post-detection processing to achieve the desired imaging performance,” says computer imaging consultant Joseph Mait from Mait-Optik, who wasn’t involved in the research.

The glass-like silicon nitride that the metasurface is made from is a material that fits in with conventional electronics manufacturing processes, which means that it shouldn’t be too difficult to scale up production of these super-tiny cameras using procedures and equipment that’s already in place.

So while there’s still plenty of work to do to get this from the lab to a commercial production line, the signs are good that it’s possible. Once that’s done, we’ll have access to super-small cameras that can actually take a decent picture, too.

There is another potential use for miniature cameras such as this: Using them as a covering layer to turn entire surfaces into cameras, removing the need for a conventional camera above a laptop screen or on the back of a smartphone.

“We could turn individual surfaces into cameras that have ultra-high resolution, so you wouldn’t need three cameras on the back of your phone anymore, but the whole back of your phone would become one giant camera,” says computer scientist Felix Heide from Princeton University.

“We can think of completely different ways to build devices in the future.”

What is the ‘lunar effect,’ and what does it have to do with shark attacks?
For the first time, astronomers detect rugby-ball shape of a deformed exoplanet
NASA’s Curiosity rover drilled holes into Mars, and found something very strange
These ancient ‘war donkeys’ were likely the 1st human-bred hybrid animals
The Doomsday Clock is About to Tick, And We’ve Never Been So Close to Midnight